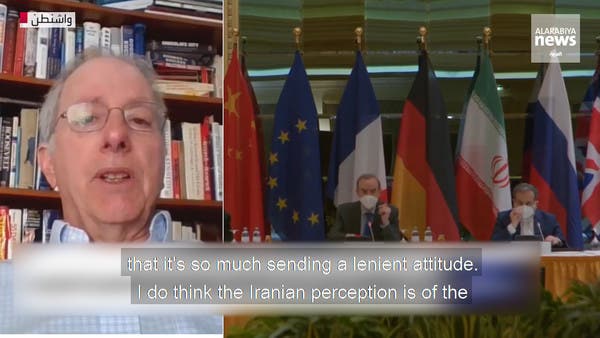 Iran continues to violate its JCPOA obligations as part of an effort to build pressure on the US, Dennis Ross, a former American diplomat, said in an interview with Al Arabiya.

“The extent to which the Iranians continue to violate those obligations, based on the premise that they’re probably trying to pressure the administration into not only going first, but into relieving more of the sanctions and the administration probably has in mind, I see this as part of an effort to build pressure on the US and the US is making pretty clear that it will come back into the JCPOA but it has to be on a sort of a package basis,” Ross said.

For all the latest headlines follow our Google News channel online or via the app.

According to him, Joe Biden’s administration wants to get back into the JCPOA but based on a premise that if Iran wants the US to relieve the nuclear-related sanctions, but only if the Iranians comply with their obligations under the JCPOA.

Ross said the Iranians have “about 12 times the amount of low enriched uranium on hand and they’re permitted under the terms of the deal.”

He added that the Biden administration would like to see JCPOA restored in “some kind of calm for calm basis, established within the region so the risk of war in the region goes down. It doesn’t go up.”

Ross said that Israel and Iran have been involved in “a shadow conflict,” adding that some of this conflict is now coming out of the shadows.

“The more open it becomes, the more each side feels they have to do something to respond to the other. In the case of what happened in Natanz, the Israelis are not admitting that they’ve done it, but obviously, there’s a great deal of speculation that they did,” he said.

Ross added that the Iranians “violate the obligations they have, under the Iran nuclear deal, the JCPOA, and the sabotage in Natanz is basically setting back the Iranian nuclear program, at least as it relates to enrichment. “

He called the ongoing conflict between the Israelis and the Iranians “below the threshold of war, but nonetheless, clearly, quite conflictual.”

Myanmar: From COVID and Food crisis to Authoritarianism