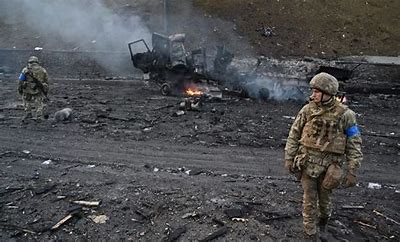 Yesterday, Ayatollah Khamenei, the supreme leader of the Islamic Republic of Iran, blamed the crisis in Ukraine on the United States and our Western allies. He tweeted the following:

The US dragged #Ukraine to where it is now. By interfering in Ukraine’s internal affairs, creating color revolutions and toppling one government and putting another in power, the US dragged Ukraine into this situation.

#Ukraine’s situation has two important lessons. Governments that rely on the US & Europe should know their support is a #mirage and not real. Today’s Ukraine is yesterday’s #Afghanistan. Both countries’ presidents said they relied on US & Western govts but were left alone. 1/2

The people are governments’ most important support. This is the 2nd lesson from Ukraine’s situation. If the people of #Ukraine had been involved, the Ukrainian govt wouldn’t be in this situation. The people didn’t get involved because they didn’t approve of the government. 2/2

Iran, one of Russia’s close partners, isn’t America’s only rogue adversary blaming the West for the crisis in Ukraine. Venezuela, another one of Russia’s groupies, used American leadership to justify Russia’s actions. Venezuela’s foreign ministry released this statement last Thursday:

“The Bolivarian Republic of Venezuela expresses its worry over the worsening of the crisis in Ukraine, and laments the mockery and violation of the Minsk accords on the part of NATO, encouraged by the United States of America. . . . The derailment of these (Minsk) accords has violated international law and created strong threats against the Russian Federation, its territorial integrity and sovereignty, as well as impeded good relations between neighboring countries.”

Khamenei and Venezuelan president Nicolás Maduro’s rogue regimes can flourish only in the wake of a diminished West. They’re placing their bets on major U.S. adversaries, namely Russia and China, to usher in a “new era” — one devoid of Western leadership and principles. At the same time, Russia and China are backing these less powerful rogue regimes to slowly chip away at U.S. power projection abroad.

And we’re letting them.

Khamenei’s comments came as negotiators continue to iron out the details of an especially weak nuclear deal in Iran. Iranian officials have demanded a full lifting of sanctions, though they continue to sponsor regional terrorism, flout existing sanctions, evade IAEA inspections, and enrich uranium up to 60 percent. In exchange, they’d get a practically unfettered path to a nuclear-weapons program.

Meanwhile, Russia, Iran, and China are solidifying their economic and security ties with the Maduro regime. Earlier today, Maduro and Putin discussed deepening their strategic partnership on a phone call. Iran is trading oil with Venezuela despite U.S. sanctions and facing zero consequences.

Our adversaries don’t exist in a vacuum. Showing weakness with one means showing weakness with all. A rogue world order is indeed emerging. The Biden administration and its Western partners are learning the hard way that in the absence of consistent and decisive leadership, rogues big and small will band together and wreak havoc.