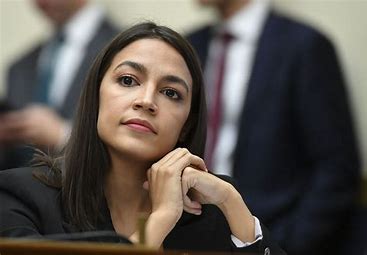 She is not, pretty clearly.

And so she probably shouldn’t be beaming out claims to the contrary to her audience of 13 million people, as some are bound to come away wrongly believing that their only option in the event of an emergency is to start driving hundreds of miles to a pro-choice state while they’re slowly dying.

Poor guy. He left before his soufflé because he decided half the country should risk death if they have an ectopic pregnancy within the wrong state lines. It’s all very unfair to him.

Righties have taken to half-begging and half-scolding her in the days since she posted that to correct the record and urge women with ectopic pregnancies to go to the local ER, where they’ll be treated.

Please name which states, @AOC, so women with dangerous ectopic pregnancies don’t avoid seeking care based on the fear you are stoking here. https://t.co/ZBsOMwZQR5

All snark aside I hope you will consider taking this down. Falsely claiming that women will be denied care for ectopic pregnancies could lead to them put off or avoid seeking safe, legal care, and that could lead to needless deaths. Please consider your influence here.

Medical care for an ectopic pregnancy is not illegal in any state given the risk to the mother.

Stop inciting emotional hype and confusion with your agenda. https://t.co/rLqsv77vNY

Saphier is an M.D. and well-known to Fox News fans. More from Jonathan Turley:

In the New Yorker, Jia Tolentino wrote that “abortion bans will hurt, disable, and endanger many people … who encounter medical difficulties… One woman in Texas was told that she had to drive fifteen hours to New Mexico to have her ectopic pregnancy—which is nonviable, by definition, and always dangerous to the mother—removed.” That is based on a story from 2021, before the Dobbs decision, and an account from an abortion hotline of a doctor refusing to deal with an ectopic pregnancy. It is not explained how such a procedure, even when Roe v. Wade was still good law, could be denied under Texas law.

A woman reading such accounts or listening of Ocasio-Cortez might easily conclude that she could be charged with a crime or face other legal penalties if she sought treatment for an ectopic pregnancy in restrictive states. These politicians stress that time is of the essence and that such a loss of time in an ectopic pregnancy could prove lethal. Yet, their false claims could have precisely that effect.

It is precisely the type of disinformation that many of these same leaders have called to be censored.

I’m unaware of any absolute abortion ban that would deny care even to a woman whose life is endangered by her pregnancy. In fact, the Mississippi statute that was upheld in the Dobbs ruling specifically exempted medical procedures “to terminate an ectopic pregnancy, or to remove a dead unborn human being” from the definition of “abortion.” Ectopic pregnancies are unviable; by their nature, terminating them doesn’t kill a baby who might otherwise have been born. Texas’s law is also clear on that: “An act is not an abortion if the act is done with the intent to: … (B) remove a dead, unborn child whose death was caused by spontaneous abortion [i.e., a miscarriage]; or (C) remove an ectopic pregnancy.” The statute expressly permits doctors to act in the event of a medical emergency as well.

The grain of truth in Ocasio-Cortez’s hyperbole, though, is that some medical professionals in red states may hesitate to provide certain treatments whether due to ignorance of changing laws or ambiguity in the new statutes. For instance, allegedly some pharmacists in Texas have refused to dispense methotrexate in cases of ectopic pregnancy because that drug is banned for use in elective abortions. Doctors also aren’t sure how quickly they can lawfully act to treat certain conditions that require terminating a pregnancy. If a woman has a dangerous condition, are they required to wait until it becomes life-threatening to perform an abortion? Or can they perform that abortion in the belief that failing to do so eventually would have produced a life-threatening emergency?

“Nobody wants their doctor on the phone to the hospital lawyer as they’re hemorrhaging,” one physician told Time magazine. A doctor in Texas warned NPR in May, before Dobbs was decided, that “I have certainly heard discussion among physicians that they’re very hesitant to do any kind of intervention until they’re absolutely certain that this is not possibly a viable pregnancy — even though the amount of bleeding would warrant intervening because it’s a threat to the mother’s life.”

Confusion in this area is potentially deadly so Biden’s administration issued an executive order today that tries to provide some clarity. No matter what state law may say or imply, says HHS’s order, any doctor who works at a hospital that accepts Medicare is protected by federal law when performing an abortion on a woman whose pregnancy is causing a medical emergency.

The Emergency Medical Treatment and Active Labor Act “protects providers when offering legally-mandated, life- or health-saving abortion services in emergency situations,” said HHS in a guidance issued via the Centers for Medicare and Medicaid Services…

“Today, in no uncertain terms, we are reinforcing that we expect providers to continue offering these services, and that federal law preempts state abortion bans when needed for emergency care,” [HHS head Xavier] Becerra added.

“Under federal law, providers in emergency situations are required to provide stabilizing care to someone with an emergency medical condition, including abortion care if necessary, regardless of the state where they live,” said CMS Administrator Chiquita Brooks-LaSure.

Will that stand up in court? Probably — for the simple reason that no Republican AG anywhere will want to risk the political backlash that would ensue if they challenged it as a matter of federalist principle, on Tenth Amendment grounds. Bottom line: No matter where you live, if you or yours are experiencing any pregnancy complications, ignore AOC and go to the nearest ER. They’ll take you.

The Geneva Summit: Nothingburger or Watershed?