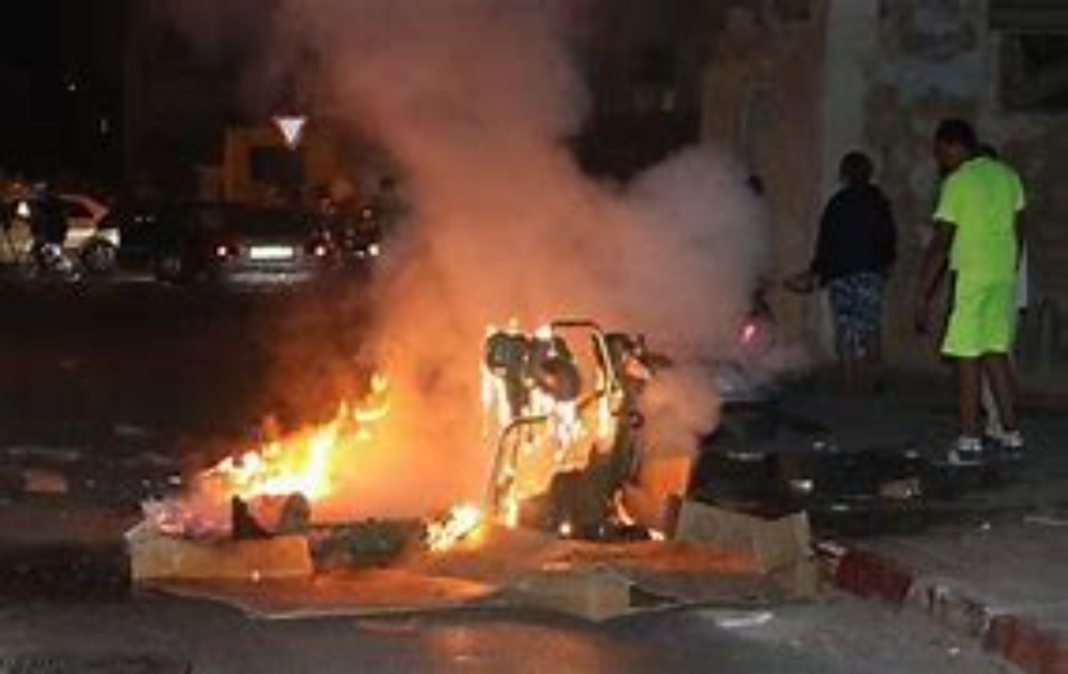 JAFFA — The streets of Jaffa’s famed flea market are quiet now, following the protests, violence and vandalism that took place in May.

While tourists haven’t returned, packages ready for shipping were piling up at Hilweh Market, a boutique of Palestinian handcrafted items curated and owned by Adria Abu Shehadeh.

“It’s all sales from abroad,” said Abu Shehadeh, who keeps up a steady patter of information and photos on her Instagram site. “They want to help us here in Jaffa.”

During those days of unrest in May, however, Abu Shehadeh kept the store’s blue metal doors shuttered. She said she didn’t feel safe to open them because there were nationalist Jewish mobs roaming the streets.

“We considered whether we should come in to protect the store or empty it,” said Abu Shehadeh, a Jaffa native who opened her artisanal shop last year seeking to create an authentically Palestinian experience.

Accounts of the events in Jaffa differ depending on where one lives in this seaside city adjacent to Tel Aviv.

An early, non-violent protest in May 2021 in Jaffa, when police unexpectedly threw sound grenades at the crowd (Courtesy Hilweh Market)

Abu Shehadeh found it to be a terrifying experience vis-a-vis the police, who threw sound grenades during the first, nonviolent neighborhood protest, shot rubber bullets at Arab residents of her neighborhood, and asked if she was an Arab or a Jew when her car was set on fire and she called them for help.

Police brutality is nothing new to an Arab from Jaffa, charged Abu Shehadeh, who came home after ten years in the US after earning a BA from Oberlin College and a masters in political science from George Washington University.

But the events in May, which included violence in several mixed cities against both Jews and Arabs and saw police at times keeping their distance from communities in need, felt like a turn to racism in the Israeli mainstream, and that was even more terrifying, said Abu Shehadeh.

“That week, the whole dynamic was who you were, because where you were meant different kinds of protection and that is the scariest thing,” she said. “Does being an Arab or Jew determine what level of protection or service I get?”

Not everyone saw it the same way. 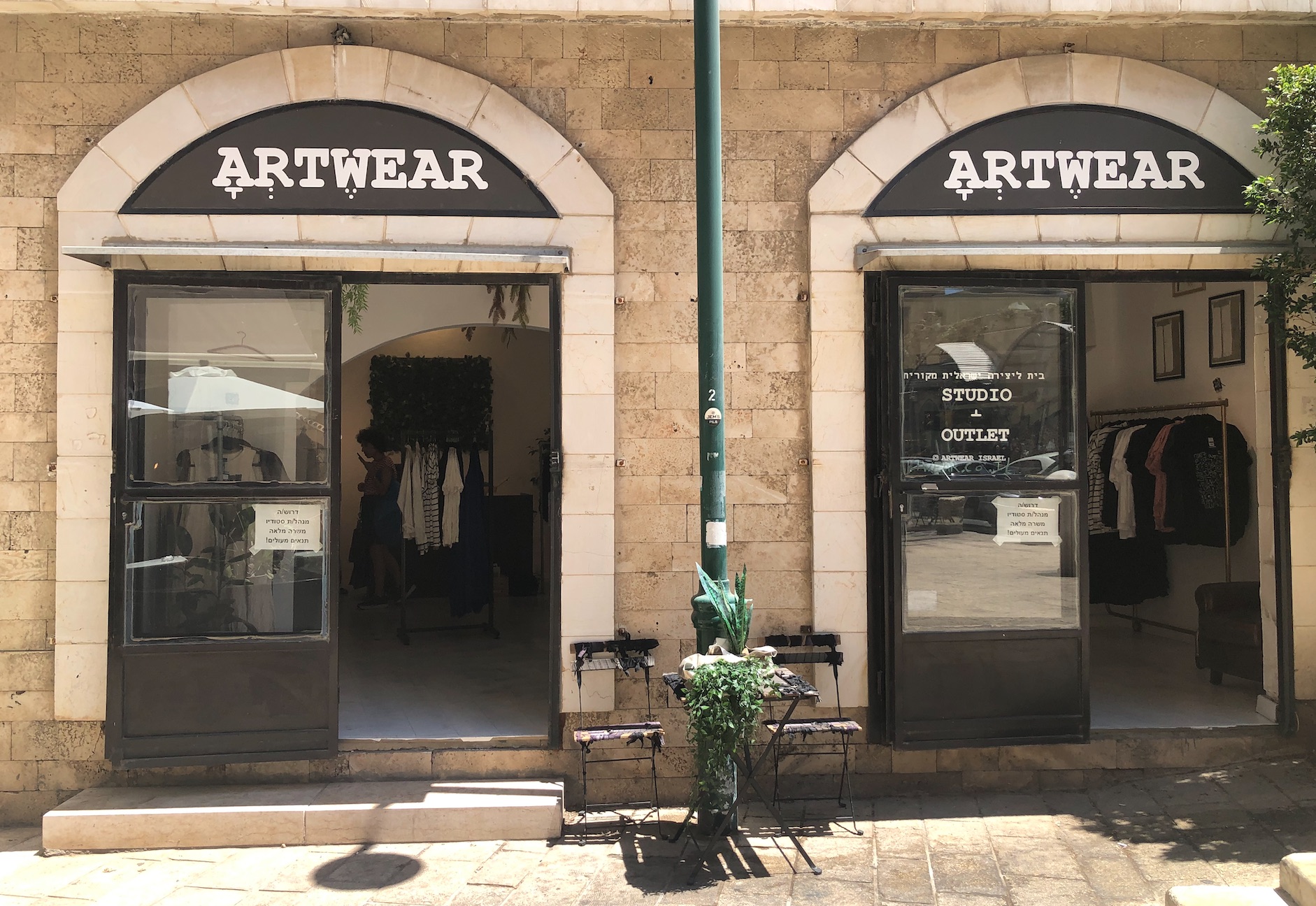 Artwear, an Israeli designer boutique in Jaffa, where Jewish owner Hadas Bezalel feels frustrated by the violence in May 2021 and plans on moving out (Jessica Steinberg/Times of Israel)

Hadas Bezalel, designer and owner of women’s clothing brand Artwear, with a boutique a few blocks away from Abu Shehadeh’s store, believes there’s a double standard in Jaffa, where, she claimed, Arab residents don’t have to follow the same regulations as Jewish residents.

Arab-owned shops didn’t close during the coronavirus and weren’t fined by the police when they remained open, Bezalel charged. Now that the coronavirus had stabilized and the economy was reopening, Bezalel said she couldn’t understand why Arabs would protest and destroy property when they benefit from tourism as much as the Jewish-owned stores.

“It was surprising for me — why? What did we do to them? We built them Jaffa,” she said. “It was finally a good month, but you killed it! For what? To burn some things? I’m tired of getting up every morning and being depressed — why should I suffer because I’m on this street? You want to fight, go to Gaza.”

A neighboring shop owner, Idan Dagan from Jaffa Eyewear, didn’t report any of the same anxieties. 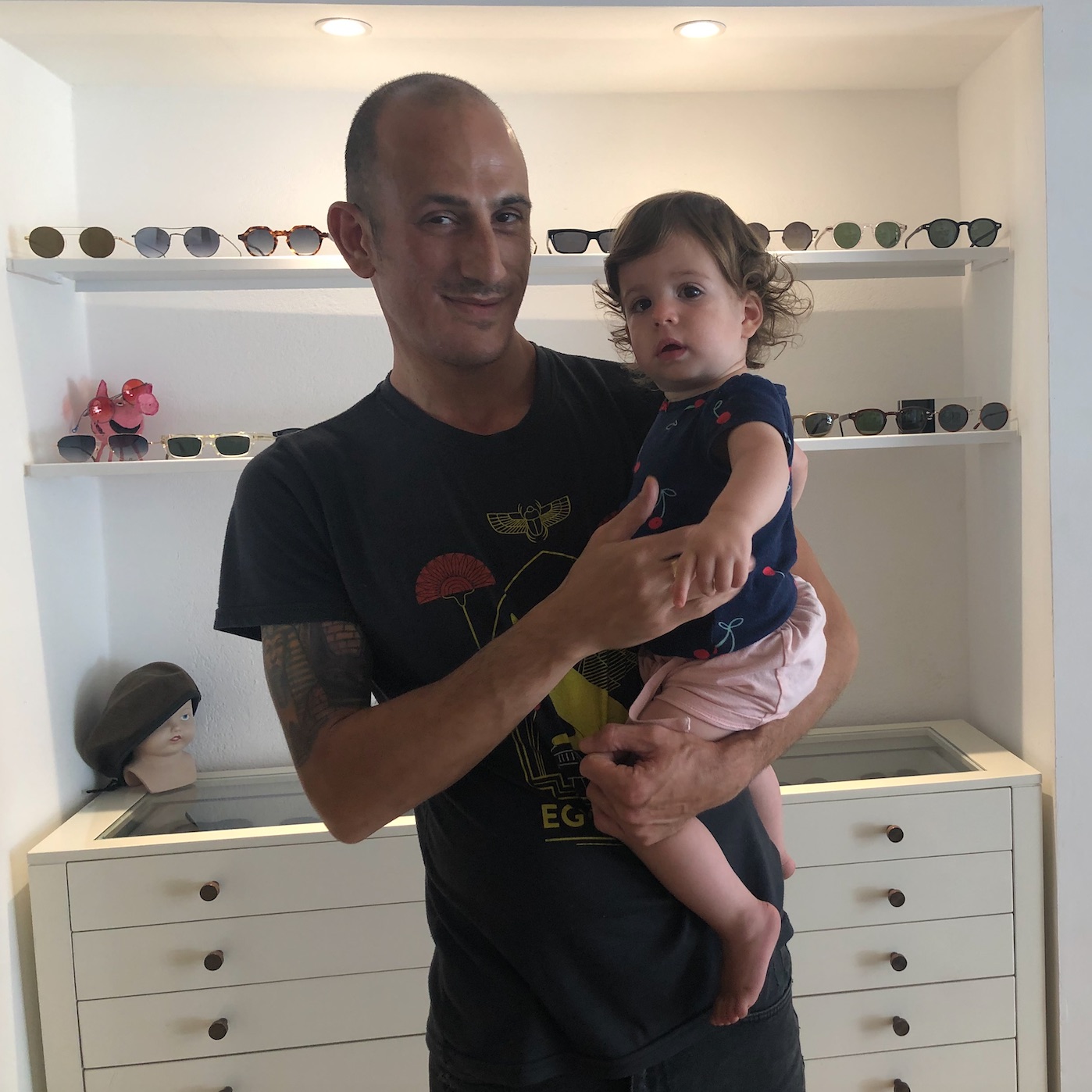 Idan Dagan and his baby daughter, in the refurbished Ottoman khan in Jaffa where he has an eyewear shop (Jessica Steinberg/Times of Israel)

He opened his store in August, in a former Ottoman Empire khan with vaulted ceilings. The new business, along with his newborn daughter, kept him busy for the last ten months as he sold eyeglasses to locals — Arab Muslims, Arab Christians and Jews.

He didn’t close his store during the week of unrest, and while it was a strange week, Dagan felt a disconnect between what he heard in the news and what he saw on the streets.

“I didn’t feel it at all,” said Dagan. “I walked around and my Arab neighbors were saying, ‘Hi neighbor,’ but were scared to speak to me. What you saw on TV was extreme, but it wasn’t the reality.”

A lot of that has to do with where one lives in Jaffa, said Abu Shehadeh.

Some two-thirds of Jaffa’s Arabs live in Ajami, a once-grand neighborhood that’s become better known for poverty and high crime rates, said Ramzi Abu Telem, a local tour guide who was appointed eight years ago to chair a municipal committee of Ajami residents.

“Jaffa was half of Tel Aviv” in 1947, with some 20,000 Arab residents, said Abu Telem. During the 1948 war that cemented the creation of the State of Israel, two-thirds of Jaffa’s Arab residents either fled or were pushed into Ajami, creating “a kind of ghetto,” said Abu Telem.

At the time, Ajami was a wealthy neighborhood, founded in the 19th century during the Ottoman Empire and known for its palatial villas and flower-filled courtyards.

The new Israeli government confiscated the empty properties and handed them to state-run public housing companies, such as Amidar, one of the largest in the area. Many of the remaining, low-income Arab residents of Jaffa ended up in those properties. They are now being urged by the Israeli government to sell their homes in order to develop more higher-end housing. 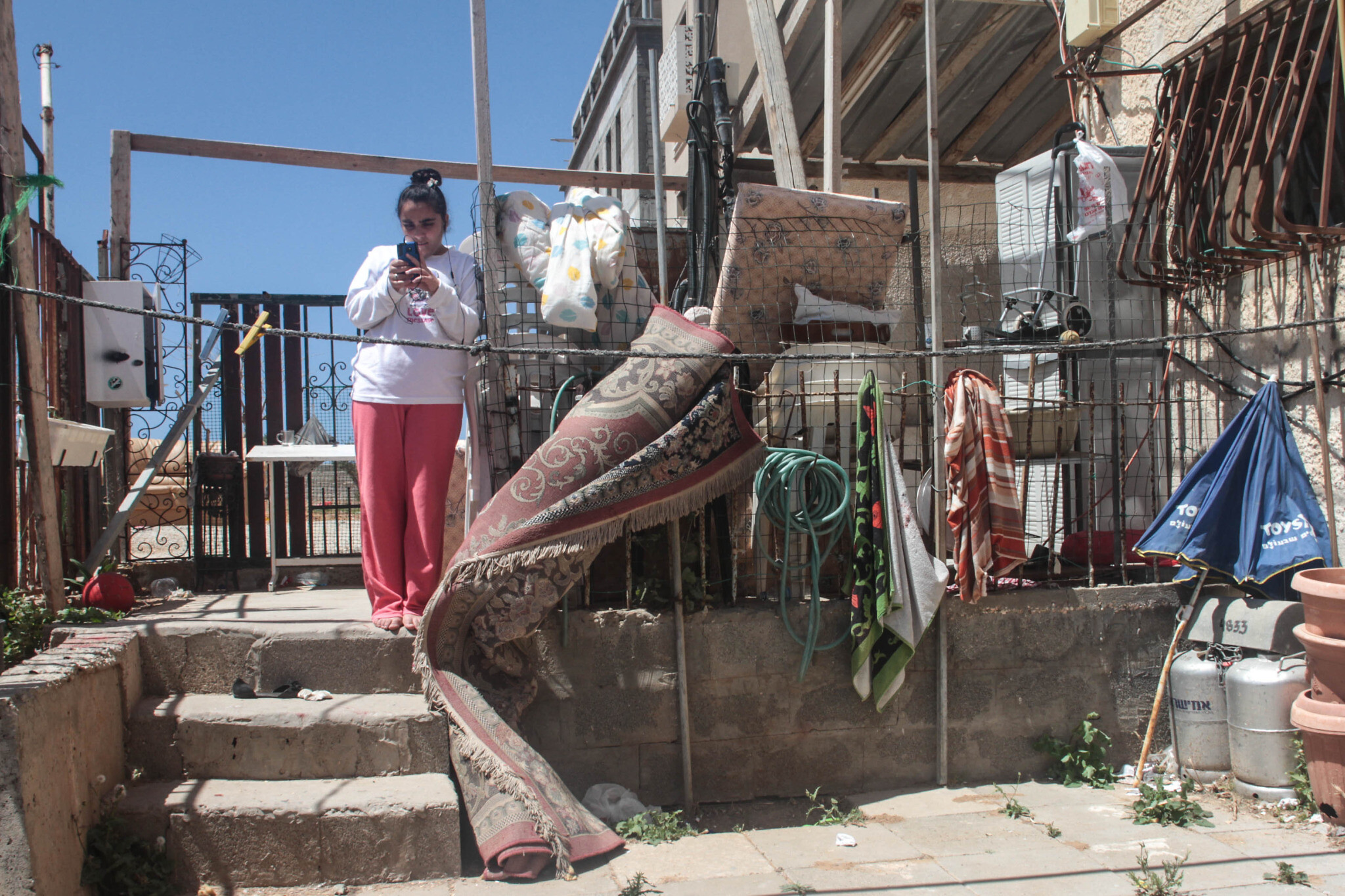 A young girl on her phone in an Arab home in Jaffa’s Ajami neighborhood, in April 2012 (Alana Perino/Flash 90)

“People were scared in 1948, they took what the new Israeli government was offering them,” said Abu Telem. “If they ran away, they did so because they had the opportunity.”

The current occupants are allowed buy the homes but the prices are too high for most, even with significant discounts and guidance. As a result, many properties are snatched up by developers, resulting in low-income Arab residents being forced out of the neighborhood

“People without money are left in a terrible socioeconomic situation,” said Abu Telem. “Life is always normal here among neighbors. Our problem is with the government; we never had a problem with the Jews.”

The local problems have been compounded by national issues over the last year, said Abed Abu Shehadeh, the only Arab councilmember in the Tel Aviv-Jaffa municipality and Adria Abu Shehadeh’s brother.

He counted off a list including rising tensions over the Sheikh Jarrah property dispute in Jerusalem, intensive Jewish nationalism displayed on Jerusalem Day which coincided with the end of Ramadan and the Eid al Fitr Muslim holiday, Muslim rioting on the Temple Mount, battling in the Gaza Strip and violence that spilled over into other Arab-Jewish mixed cities. 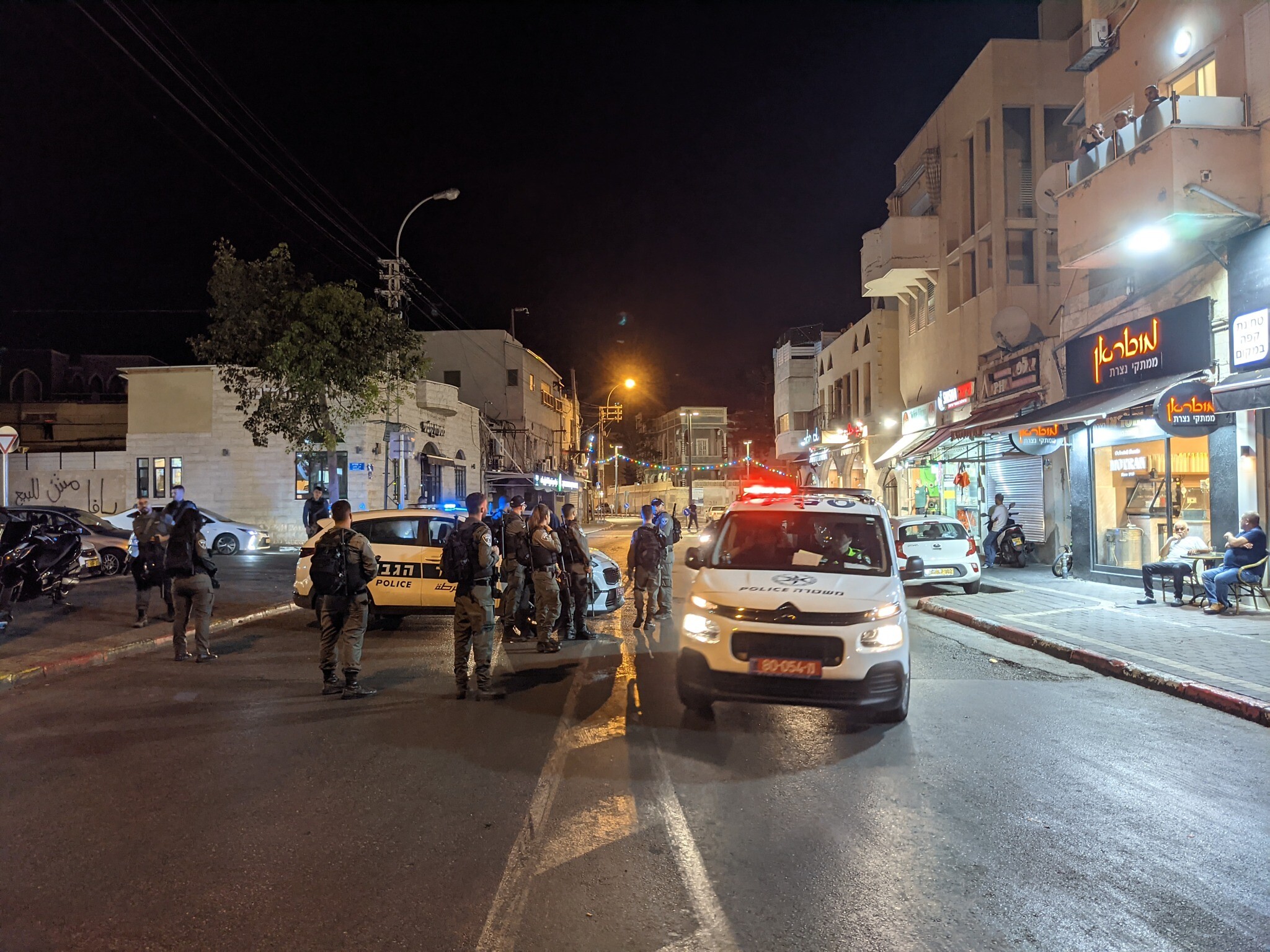 Police checkpoint on Yefet Street in the heart of Ajami, May 19, 2021. (Elie Bleier)

Abu Shehadeh called it the perfect storm for uniting middle-class, professional Arab residents of Jaffa with the younger, less educated population that felt frustrated and angry.

A long-time proponent of coexistence and working together to find solutions, Abu Shehadeh was dismayed by the heavy police presence in Jaffa and said that Tel Aviv Mayor Ron Huldai had showed no interest in allaying the tension.

“The message we got was that no matter what we do, they won’t see us as legitimate,” he said. “This is the reality of the matter and it has made me question whether I want to participate in this game of politics anymore.”

He hasn’t quit yet, though.

“Jaffa has become super gentrified by Israeli Jews in the last twenty years, less of the famous flea market and more like Disneyland,” she said. “I wanted something on the ground that would show we, Palestinians, are still here.”

But she won’t enlarge the name of her store in Arabic on the front window, because she doesn’t feel safe.

“I see it as a systematic issue, a system of oppression that leaves two peoples unequal,” she said. “This state doesn’t really consider us full citizens with full rights; non-Jews don’t have the same rights as a Jew.”