In a bid to minimize the exposure of civilian air travel to rocket fire from the Gaza Strip, Israeli air officials said Thursday that incoming passenger flights would be diverted from Ben Gurion International Airport near Tel Aviv to Ramon Airport outside Eilat in the south.

Palestinian terrorists have fired waves of rockets at Israel over recent days, with some of the projectiles slamming into the central region of the country, where Ben Gurion Airport is located. No rockets have hit the sprawling terminus.

Under the new plan, passengers will disembark at Ramon, which opened in 2019. The empty planes will then fly to Ben Gurion to take on new passengers, and then depart from Ben Gurion to their destinations abroad.

The decision is meant to broaden the air corridor taken by passenger flights in and out of the country and to minimize the numbers of passenger-filled planes on the ground at any one place in order to lower the chances that rocket fire from Gaza will hit a plane.

Freight aircraft and private planes will still be allowed to land at Ben Gurion, an Israel Airports Authority spokesman said.

View of the new Ramon Airport before its opening, in Timna, near Eilat, in southern Israel, on October 18, 2019. (Moshe Shai/Flash90)

The development came as US airlines began canceling flights to Israel due to the rocket attacks.

Tuesday flights from Newark and Chicago, as well Wednesday flights from San Francisco and Newark, were dropped by United Airlines. In a notification titled “Middle East Unrest,” it said it would waive change fees for flyers who had booked seats on planes either to or from Israel up until May 25.

American Airlines canceled a Wednesday flight from John F. Kennedy Airport in New York to Tel Aviv as well as a return flight on Thursday. It said in an update titled “Civil unrest — Tel Aviv” that it would waive cancellation fees under certain circumstances for those booked on flights until May 25, according to the report. 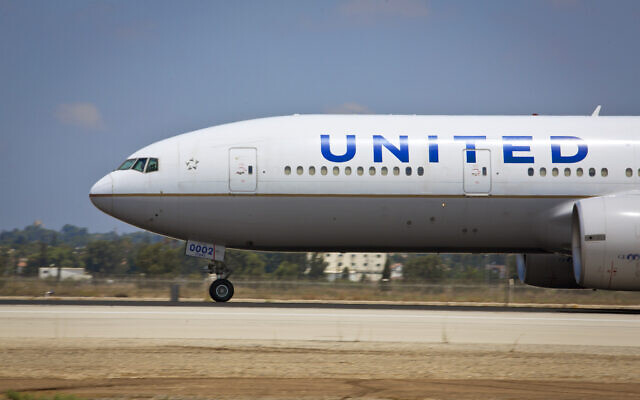 Meanwhile, Delta Airlines said it had canceled a flight from Kennedy Airport to Tel Aviv as well as a return flight, both on Wednesday. It issued a travel waiver for those booked on flights to Tel Aviv between Tuesday and Thursday, citing “operational disruptions in Tel Aviv.” A spokesman for Delta said the airline was “monitoring the situation” and that no decision had been made on when flights would restart.

Israel’s national carrier, El Al, said Wednesday that it was continuing flights as scheduled but that it would allow travelers to change tickets booked on flights before May 19, or freeze their tickets, without paying a fee. It also said it would allow passengers to have free use of the WhatsApp messaging service on flights that have Wi-Fi so that they can stay in contact with their families. 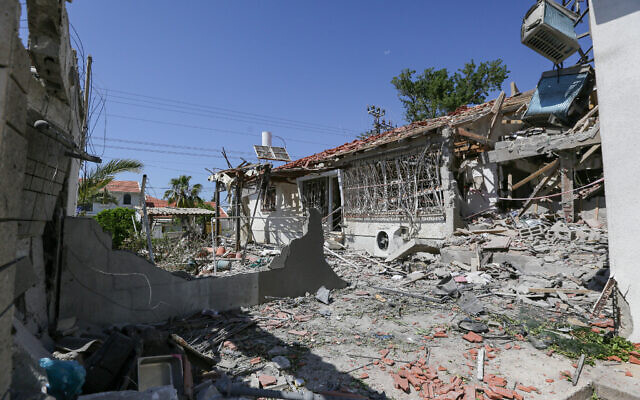 Damage to homes in the southern Israeli city of Ashkelon which were hit by rockets fired from the Gaza Strip by Hamas terrorists, May 12, 2021. (Edi Israel/Flash90)

Nearly 1,300 rockets and mortar shells have been fired on southern and central Israel since the start of the fighting on Monday, sending hundreds of thousands of people, from Tel Aviv to Beersheba, fleeing to bomb shelters, according to the IDF’s tally. Israel’s military has responded with airstrikes on hundreds of Hamas and other terror group targets, destroying infrastructure and killing senior commanders.

A total of seven people have been killed in Israel, including four people who died on Wednesday, among them a soldier killed by an anti-tank missile and a five-year-old boy hit by shrapnel.

Gaza’s Hamas-run Health Ministry said the death toll rose to 72 Palestinians, including 16 children. The IDF said dozens of those killed were members of terrorist groups, some of whom were actively preparing to launch attacks on Israel when they were hit.

The Palestinian Islamic Jihad confirmed the deaths of seven of its members, while Hamas acknowledged that a top commander and several other members were killed. Israel and a Palestinian human rights group, Defense for Children, have said that several of the civilians were killed by Hamas rockets falling short inside Gaza, not by Israeli airstrikes.

The Israeli military also claims the number of terrorists killed so far is much higher than Hamas has acknowledged.