Home Israel Israel: Bennett says all goals ‘achieved and surpassed’ during US trip 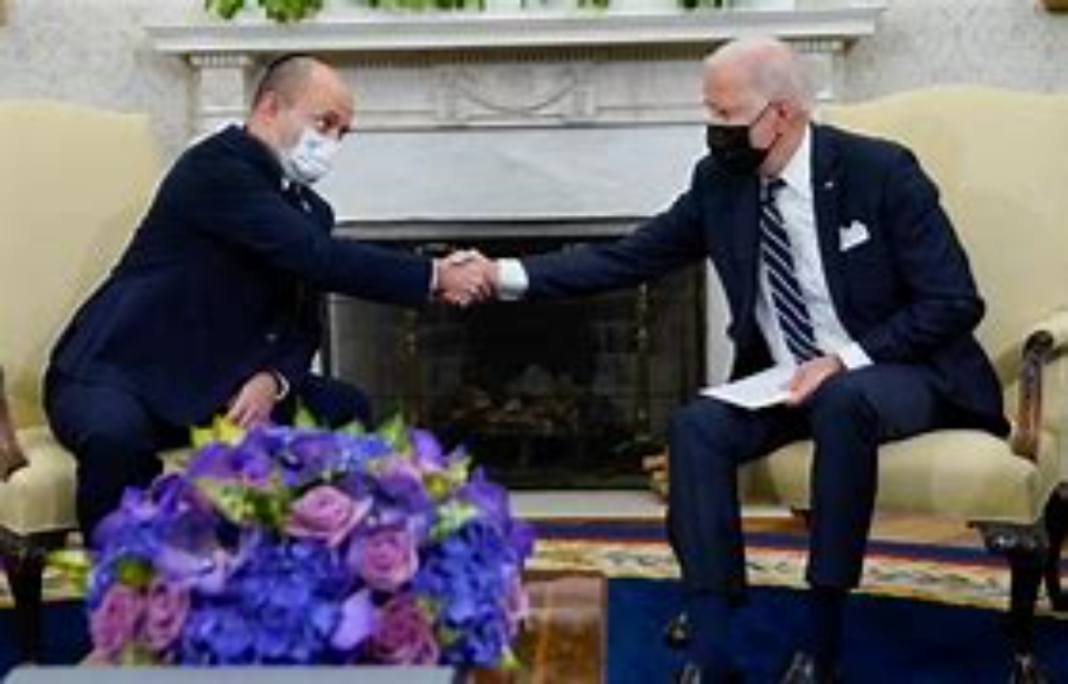 Departing Washington in the early hours of Sunday morning, Prime Minister Naftali Bennett touted his “warm” and “successful” meeting with US President Joe Biden on Friday, saying all of his goals had been achieved during his trip.

“We’re about to take off from a successful visit to Washington — the peak of which was meeting Biden,” Bennett said in a statement shortly before departing the US capital. “We had a particularly warm and helpful meeting. Biden and I have developed a direct and personal relationship built on trust.”

Bennett and Biden met in the White House on Friday, after the meeting was delayed by 24 hours due to the deadly bombing at the Kabul airport on Thursday, which killed at least 169 Afghans and 13 US military personnel.

Following the two leaders’ 50-minute meeting, Biden reiterated the US “commitment to ensure Iran never develops a nuclear weapon… We’re putting diplomacy first and seeing where that takes us. But if diplomacy fails, we’re ready to turn to other options.”

Departing on Sunday, Bennett said that he had “achieved and surpassed all the goals we set for ourselves for the meeting. We agreed on joint strategic cooperation to halt Iran’s nuclear race.”

He also noted advances toward Israel joining the US visa waiver program: “For the first time, Biden instructed to move forward and close the deal as quickly as possible,” said Bennett. The prime minister said he wanted to “thank Biden for the very warm welcome.”

He also addressed the IDF strikes on Gaza overnight in response to violent border riots and multiple incendiary balloon attacks. “As I have said: We will operate in Gaza according to our vested interests,” he said. “The responsibility [for activities] in Gaza has been and continues to be Hamas.”

Palestinian protesters burn tires following a demonstration along the border between the Gaza Strip and Israel east of Gaza City on August 28, 2021. (Photo by MAHMUD HAMS / AFP)

Army Radio reported Sunday that Bennett had presented Biden with several conditions for Gaza’s reconstruction, including an immediate halt to rocket fire and rocket-gathering by Hamas, as well as progress on a deal to return two Israeli citizens and the bodies of two IDF soldiers believed to be held by the terror group.

However, US Secretary of State Antony Blinken was said to have argued that the return of the Israeli captives should not be a prerequisite for basic humanitarian matters, such as fuel and electricity.

Army Radio also reported that Bennett and Biden had agreed during their meeting not to emphasize their disagreements regarding construction in West Bank settlements. The Biden administration will reportedly not pressure Israel on the matter, while Bennett’s government won’t approve massive construction.

“Both sides are determined not to define the relationship on this issue,” the outlet quoted an unnamed diplomatic source as saying.

Bennett arrived in the United States early Wednesday morning, and was slated to meet with Biden at the White House on Thursday. But just as he arrived, news broke of the deadly bombings at the Kabul airport that killed at least 182 people. The meeting was rescheduled for Friday morning, and the entire Israeli delegation was forced to remain in DC over Shabbat, since there wasn’t enough time to fly back before the Sabbath began at sundown.

Following their meeting, Biden highlighted “the unwavering commitment that we have in the United States to Israel’s security,” and pledged to work on “ways to advance peace and security for Israelis and Palestinians.” 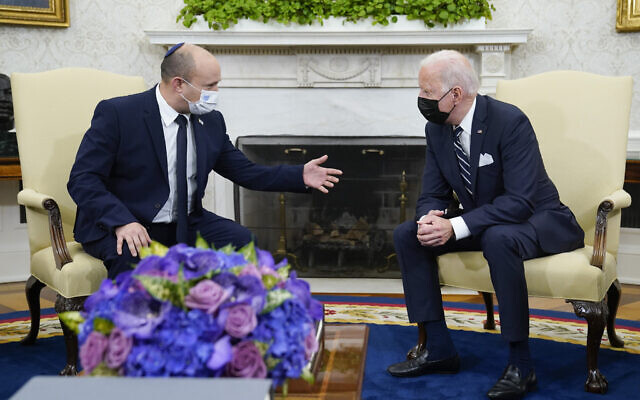 Biden added that the US supported Israel developing “deeper ties” with its Arab and Muslim neighbors, though he did not use the term “Abraham Accords,” in apparent accordance with administration policy toward the deals mediated by the previous US administration.

Bennett told reporters shortly after the meeting that he had invited Biden to visit Israel at a future date, and said their meeting was warm and constructive.

“It was a wonderful meeting, especially the one-on-one,” he said. “It was mostly a working meeting. There was a feeling that we’ve known each other for a long time. I found a leader who loves Israel, who knows exactly what he wants, and is attentive to our needs.”

The premier said that even after the blast in Kabul, Biden had been adamant about rescheduling the meeting.

“I am truly grateful to the president and his entire staff for their determination to carry out the meeting,” Bennett said, praising the Biden administration for its “attentiveness and focus at the height of a complex American incident.”

The Climate Crisis and Responsible Journalism

As The Times of Israel’s environment reporter, I try to convey the facts and science behind climate change and environmental degradation, to explain – and critique – the official policies affecting our future, and to describe Israeli technologies that can form part of the solution.

I am passionate about the natural world and disheartened by the dismal lack of awareness to environmental issues shown by most of the public and politicians in Israel.

I’m proud to be doing my part to keep Times of Israel readers properly informed about this vital subject – which can and does effect policy change.

Your support, through membership in The Times of Israel Community, enables us to continue our important work. Would you join our Community today?

Israel warned Biden over criticism of Egypt, Saudi Arabia human right, fearing they will turn to Russia and China for support

Israel: Mother of IDF soldier who is critically wounded grieve for her son