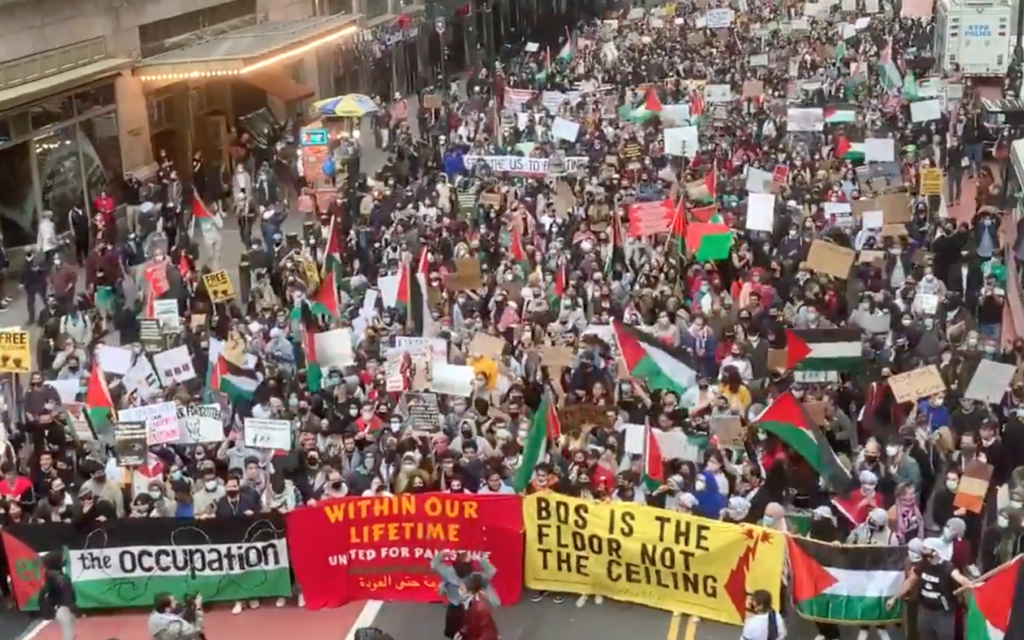 NEW YORK — Thousands of pro-Palestinian New Yorkers packed the streets of Midtown Manhattan Tuesday at a protest against Israel amid ongoing violence coming in and out of the Gaza Strip.

The protest, titled “rally to save Palestine,” commenced near the Israeli Consulate in New York, where internal security ordered staff home early to ensure their safety, a spokesman for the mission said.

After meeting outside the consulate, demonstrators marched toward Times Square, shutting down 42nd Street as they chanted slogans such as “Defend Jerusalem,” “Gaza under attack,” “No more money for Israeli crimes,” “Free Palestine” and “End the occupation now.”

Several dozen pro-Israel demonstrators also rallied nearby and a part of the massive police presence at the scene was used to separate between the two sides as they shouted at each other.

Today’s march was gigantic. One of the largest I have ever seen in NYC for Palestine. Now, we need to keep this same energy going until Palestine is liberated. Together, we can end Israel’s apartheid regime and free Palestine for all. pic.twitter.com/d9p1QJHDRw

One clip uploaded to YouTube showed a pro-Palestinian demonstrator seeking to rip an Israeli flag from one of the pro-Israel demonstrators who was behind a police barrier. Officers immediately jumped on the suspect and arrested him.

Another clip posted on social media showed police holding back several shouting pro-Palestinian protesters from a bloodied Jewish man who stood on the other side of a store window, holding up his Star of David necklace. It was not clear how the man suffered his injuries, nor who instigated the altercation.

Local news outlets said police made a number of arrests, adding that the tense demonstration concluded without any other major incidents.

A pro-Israel rally is scheduled for Wednesday evening at Times Square and is expected to bring large crowds.

According to the IDF, over 1,050 rockets and mortar shells have been fired from the Gaza Strip toward Israel since the outbreak of fighting on Monday evening. Five civilians were killed in the attacks. In response, the IDF launched strikes on upwards of 500 targets in the Gaza Strip, aimed at Hamas personnel, weaponry and infrastructure, the army said.

The Hamas-run health ministry said 32 Gazans were killed, including 10 minors, and 220 wounded in the ongoing escalation with Israel. Fifteen Gazans sustained serious injuries, according to ministry spokesperson Ashraf al-Qidra. Israel said more than half were Hamas fighters.

Palestinian terror groups have tied the attacks to ongoing unrest in Jerusalem connected to both prayer on the Temple Mount during the Muslim holy month of Ramadan and the pending eviction of a number of Palestinian families from their homes in East Jerusalem’s Sheikh Jarrah neighborhood.

Israel has fought three large operations against Hamas and other terror groups in the Gaza Strip since 2008, most recently in 2014 with a 51-day war known as Operation Protective Edge.