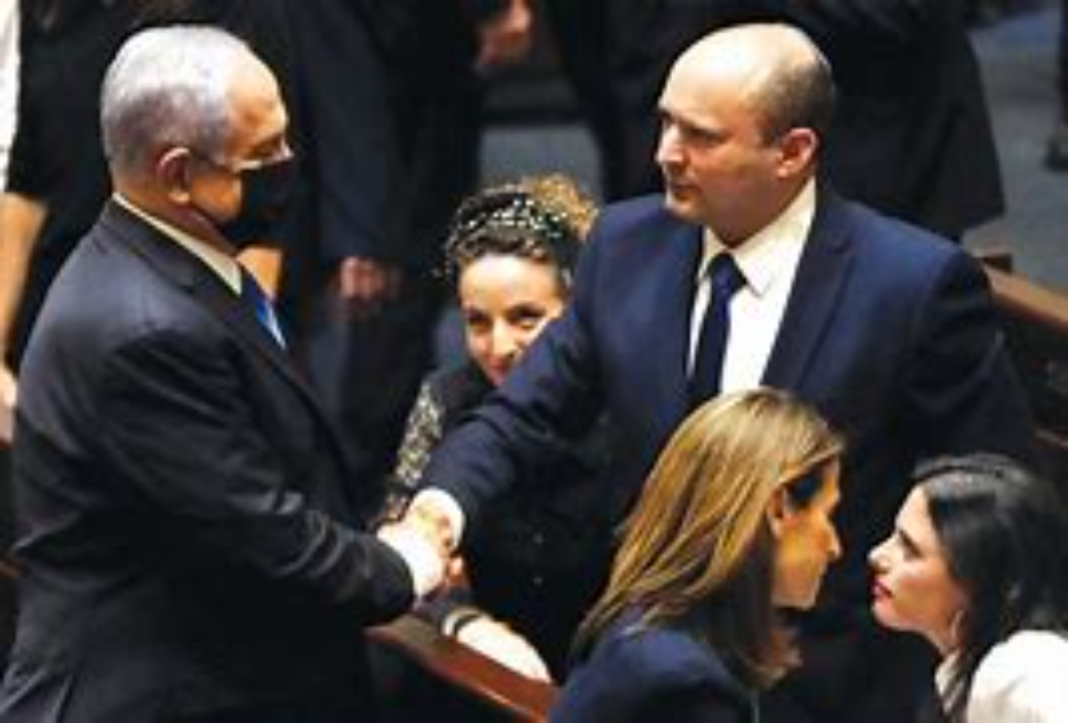 Prime Minister Naftali Bennett and Opposition Leader Benjamin Netanyahu traded insults Wednesday from the Knesset rostrum during the lengthy proceedings to approve a state budget, exchanging accusations of a failure of leadership as lawmakers began casting their final votes on the proposed budget.

The Bennett-led coalition — an assortment of right-wing, centrist and left-wing parties plus an Islamist faction — holds a narrow Knesset majority and is seeking to approve the budget by Friday. If it does not approve a budget by November 14, the Knesset will dissolve and new elections will be called.

Bennett told lawmakers that approving the budget was “the most important moment” since the government was formed in June, ousting Netanyahu from the premier’s office after 12 consecutive years in power.

The prime minister noted the budget would be the first to be approved in three and  a half years, a period he said was marked by “chaos, failed management and paralysis, years in which the country was a tool in a personal game, years of four election campaigns one after another at a dead end.”

Bennett then accused Netanyahu of seeking to falsely depict the proposed state budget as providing money to the Gaza Strip or the enclave’s Hamas rulers.

“This is Bibi [Netanyahu’s nickname]. This is you. This is your business model, Bibi. Netanyahu’s entire existence is to divide… If there is unity, there is no Bibi… If in order to divide you need to lie — then he’ll say it, even if it’s not true,” he said. “There’s no money for Hamas.”

Opposition Leader Benjamin Netanyahu speaks ahead of the final votes on the state budget, at the Knesset in Jerusalem, November 3, 2021. (Olivier Fitoussi/Flash90)

The premier also raged at what he described as “hypocrisy” by Netanyahu’s Likud party, as it had also courted the Islamist Ra’am after the election to try to get it to support its own proposed coalition. Likud has criticized Bennett for including Ra’am in the government.

“I was there in the closed rooms” where a Netanyahu government-backed by Ra’am was discussed, he said. “That was the only deal [on the table].”

“The moment that the budget passes, everyone understands, a new era begins in Likud and everything is open,” added Bennett.

Speaking after Bennett and other government representatives, Netanyahu hailed anti-government protesters who rallied in Tel Aviv’s HaBima Square Tuesday, saying they came to “drive out the darkness“ of the current coalition.

Netanyahu argued the budget would raise the costs of living for Israelis and include measures that would hurt the country, such as new taxes on soft drinks and plastic cutlery, claiming these would hurt lower-income individuals while benefitting the rich.

“We’re getting a budget of taxes. Tax raises and tough [spending] cuts. A lot of taxes. It’s so typical. The government of lies always does the complete opposite of what it promises,” the former prime minister said.

“The Palestinians know that from Bennett and Lapid they’ll get whatever they want, and what they want is bad for Israel,” he said.

The opposition chief also issued a fresh appeal to any coalition members uneasy over the budget to oppose it, as Likud looks for deserters, particularly among the coalition’s right-wing Yamima and New Hope factions. 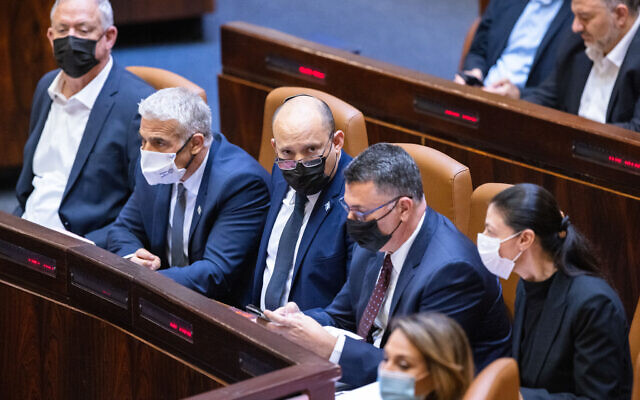 Prime Minister Naftali Bennett (C) and other government ministers attend the final votes on the state budget, at the Knesset in Jerusalem, November 3, 2021. (Olivier Fitoussi/Flash90)

The votes on the budget are expected to take until Thursday evening at the earliest, with hundreds of clauses making up the proposed NIS 609 billion ($194 billion) spending plan for 2021, and NIS 573 billion ($183 billion) for 2022, and the opposition having submitted dozens of objections.

There will be a total of 780 separate votes, which Bennett predicted would all be won by the coalition.

The coalition can muster at best 61 votes in the 120-seat Knesset, but Bennett said he was certain the budget would pass.

Knesset proceedings on the budget began Tuesday with speeches by lawmakers, each of whom was granted 30 minutes to address parliament.