Home Politics ‘It Just Makes You Sick to Your Stomach’ 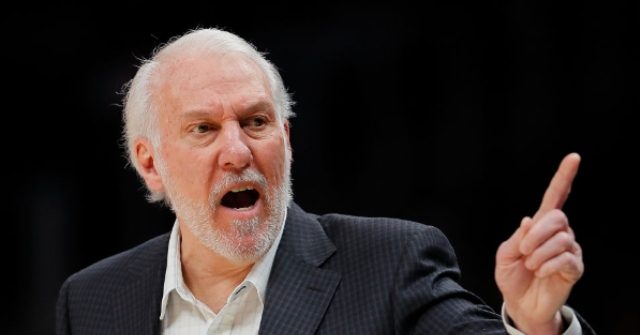 “It just makes you sick to your stomach. How many times does it have to happen?” Popovich told reporters. “… That individual is dead. He’s dead. And his family is grieving, and his friends are grieving.”

Brooklyn Center Police Department pulled Wright over on Sunday for having an expired registration. A struggle ensued after Wright broke free of the arresting officer and attempted to drive off in the police vehicle. Another officer approached Wright in the vehicle with what she thought was a taser. Instead, she had her gun and fatally shot Wright.

“It is my belief that the officer had the intention to deploy their Taser, but instead shot Mr. Wright with a single bullet,” Brooklyn Center Police Chief Tim Gannon said. “This appears to me, from what I viewed, and the officer’s reaction and distress immediately after, that this was an accidental discharge that resulted in a tragic death of Mr. Wright.”

Popovich also directed his ire at Texas Governor Greg Abbott (R, TX), whom he called “deplorable” and “almost impossible to listen to.”

“The other day when guns came up, he actually made the statement again, an old trite myth argument that, ‘They’re coming for your guns. That’s going to be the next step. They’re going to take away your guns.’ Nobody is taking away anybody’s guns, and he knows it,” Popovich said. “So he’s a liar. But he wants to keep his seat. He wants to continue to stay in power, and he’ll say whatever he has to do to follow the lead of Donald Trump and the rest of the Republicans.”

More emotional Popovich blasting Abbott, Trump followers and people who empower police unions: “How many young black kids have to be killed for no freaking reason so we could empower the police unions. We need to find out who funds these people.” pic.twitter.com/lcTTDQ1eIP

Popovich continued to blast pro-2nd Amendment Republicans and demanded to know where their funding comes from.

“We need to find out who funds these people,” he said. “I want to know what owners in the NBA fund these people who perpetrate these lies. Maybe that’s a good place to start, so it’s all transparent.”

The Minnesota Timberwolves postponed their game on Monday night in response to the riots following the shooting.

U.S. Military is discharging service members who refuse to get vaccinated