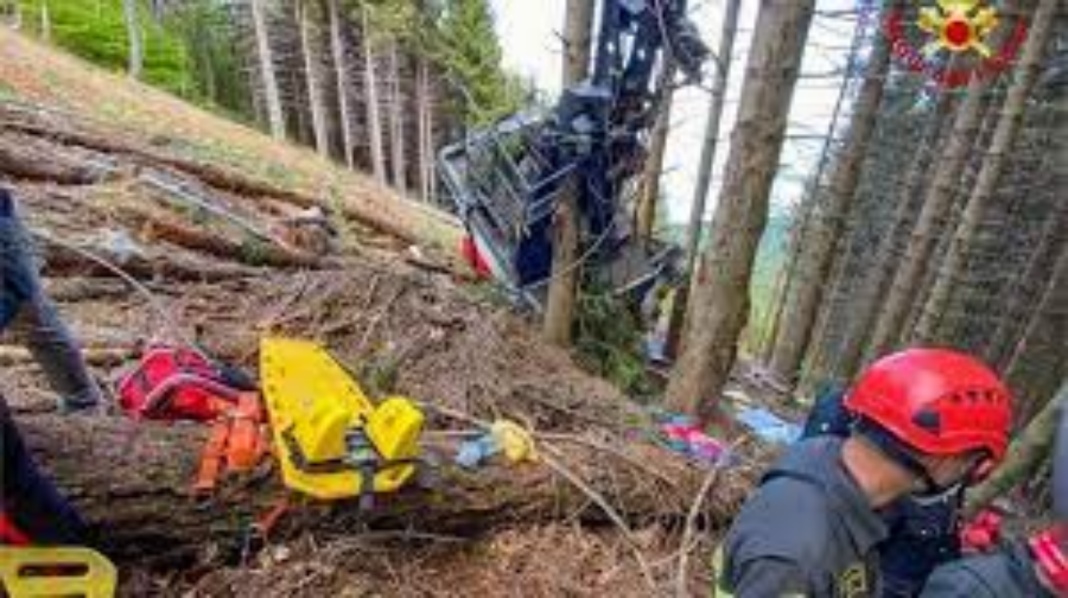 Three people have been arrested over the cable car crash in northern Italy, including the owner and manager of the Mottarone cable car company, which operates the site.

Luigi Nerini was arrested along with the company’s lead engineer and operative head of service, according to Italian media.

The tragedy killed 14 people, including five members of one Israeli family. The lone survivor of the crash, 5-year-old Israeli boy Eitan Biran, was being taken off sedation after his condition improved.

Israeli media reported that a local psychiatrist has been appointed to break the news to the child of the loss of his parents, younger sibling and two great-grandparents.

The public prosecutor of the Verbania province, Olimpia Bossi, has reportedly said the suspects carried out a “conscious action” that put visitors at risk.

They face multiple charges of manslaughter and negligent disaster.

She said the emergency brakes were deactivated shortly before the incident by placing on them a device referred to as a “fork,” to avoid service delays following a problem with the main brake system that had existed for over a month.

Prosecutors have said they seized security camera footage of the incident showing the operator preparing to open the cabin door at the Mottarone peak overlooking Lake Maggiore in Italy’s northern Piedmont region, when the lead cable of the Stresa funicular snaps and sends the cabin sliding back downhill — eventually falling and crashing, with the emergency brake failing to activate.

Prosecutors have said several of the passengers were flung out of the car as it fell and tumbled down the mountainside until it came to rest against some trees.

The bodies of the five members of the Biran family killed in the crash would be flown to Israel on Wednesday for burial, Israeli Ambassador to Italy Dror Eydar said Tuesday.

Eitan Biran remained hospitalized in serious condition in Turin, Italy, with multiple broken bones, though the doctor treating him reported he was showing positive signs after undergoing surgery.

Pope Francis on Tuesday offered prayers for “little Eitan” and said he was “following his case with trepidation.”

The doctor treating Biran at Turin’s Regina Margherita children’s hospital said Tuesday that medical staff had begun waking him from sedation and that he was responding positively, according to Channel 12 news. The boy earlier had surgery and an MRI, which showed no brain damage or injury to his spinal cord. An aunt and other family members have been with him at the hospital.

Eitan, who resided in Italy with his family, was apparently saved by the embrace of his father, who died when the cabin crashed to the ground, a hospital spokesperson said Monday.

“In order to be able to survive the terrible impact, it is likely that the father, who was of robust build, wrapped his son in a hug,” the Regina Margherita Hospital in Turin said, according to the Italian la Repubblica newspaper.

Portland: Rioting terrorists have struck back on the George Floyd’s death...