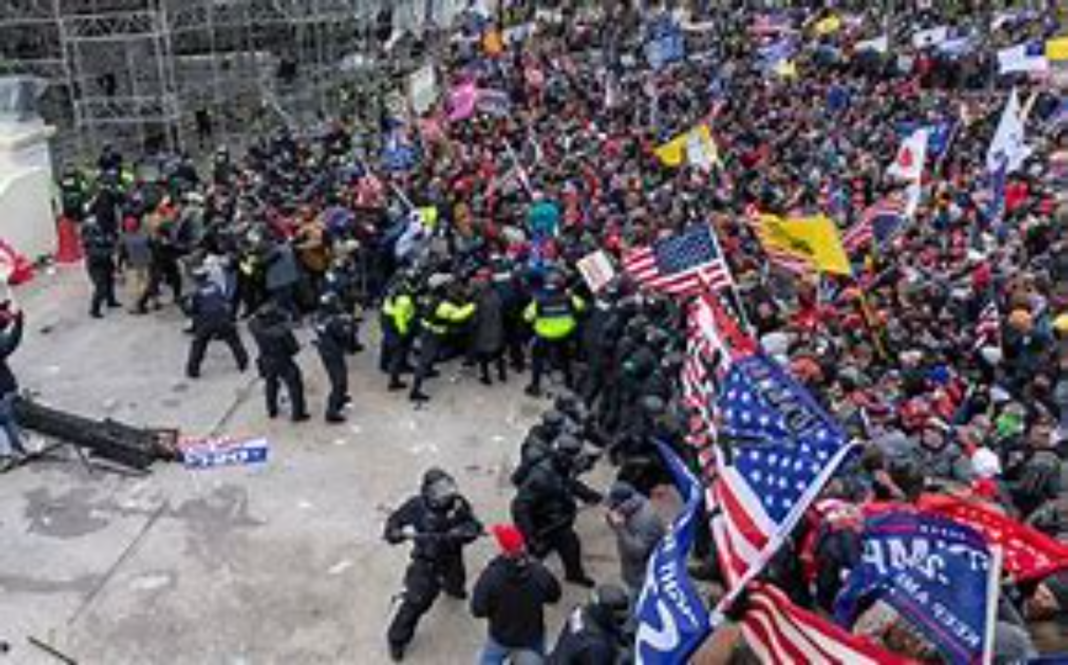 A veteran officer with the U.S. Capitol Police was arrested Friday for allegedly encouraging a suspect in the Jan. 6 Capitol riot to hide evidence of their involvement in the attack. He is facing two counts of obstruction of justice, and has been placed on administrative leave while the case is ongoing.

The officer, Michael Angelo Riley, has worked for the Capitol Police for nearly 25 years, the department told NPR, and most recently served as a technician with the K-9 unit.

During the Jan. 6 siege, Riley was not inside the Capitol building, court papers state, but was instead responding to reports of explosives by the headquarters for the Democratic and Republican parties.

The day after the attack, according to an indictment filed in federal court, Riley sent a message to one of his Facebook friends, who had posted selfie-style photos from inside the Capitol building and discussed their participation in the riot.

“Im [sic] a capitol police officer who agrees with your political stance,” Riley allegedly wrote to the suspect, whom the indictment does not name. “Take down the part about being in the building they are currently investigating and everyone who was in the building is going to [be] charged. Just looking out!”

The suspect then allegedly sent multiple videos of themself in and around the Capitol building to Riley. There is no indication in the indictment that Riley shared any of this information with investigators from his own department or the Federal Bureau of Investigation. Rather, court papers state, Riley responded to the suspect, “Just wanted to give you a heads up…Im [sic] glad you got out of there unscathed. We had over 50 officers hurt, some pretty bad.” (In fact, more than 150 officers were injured in the Capitol riot.)

Over the course of the next several days, Riley and the suspect allegedly sent dozens of messages back and forth and spoke on the phone at least once. In one message cited in the indictment, Riley instructed the suspect to, “get off of social media.”

The indictment alleges that the suspect was arrested on Jan. 19, and, on Jan. 20, wrote to Riley that the FBI was “very curious that I had been speaking to you.” That day, Riley allegedly deleted all of his Facebook messages with the suspect.

After his arrest on Friday, Riley briefly appeared in federal court. Prosecutors did not seek to detain him while the case is ongoing, though the court has imposed some restrictions on his travel as well as the possession of firearms.

In a statement, Capitol Police Chief Tom Manger said, “Obstruction of Justice is a very serious allegation. The Department was notified about this investigation several weeks ago. Upon his arrest, the officer was placed on administrative leave pending the completion of the case. The USCP’s Office of Professional Responsibility will then open an administrative investigation.”

A representative of the labor union that represents officers with the Capitol Police did not respond to a request for comment. NPR was unable to reach Riley’s attorney.

Still, some Capitol Police officers have come under scrutiny for their actions during the siege. In September, the Capitol Police stated that they had conducted internal investigations of more than 20 officers, and recommended that at least six receive discipline for actions including “conduct unbecoming,” failure to comply with directives,” “improper remarks” and “improper dissemination of information.”

At that time, the Capitol Police stated that “the U.S. Attorney’s Office did not find sufficient evidence that any of the officers committed a crime.”

The indictment against Riley changes that, and may add to the longstanding and growing concern about the presence of extremism in the ranks of law enforcement and the military.

NPR has found more than 80 defendants – 13 percent of the total – charged in connection with the Capitol riot have links to law enforcement and the military. A recent leak of data from Oath Keepers – some of whose members are facing conspiracy charges related to the Capitol attack – indicated that current and former officers have signed up with the extremist militia group.

There is no evidence in the indictment that Riley has links to any known extremist organizations. Still, the indictment suggests that he harbored some sympathy for an alleged participant in the Capitol riot, an incident that the FBI has classified as an act of “domestic terrorism.”

Canada:Trudeau Just Made a Last Desperate Attempt to Save Face