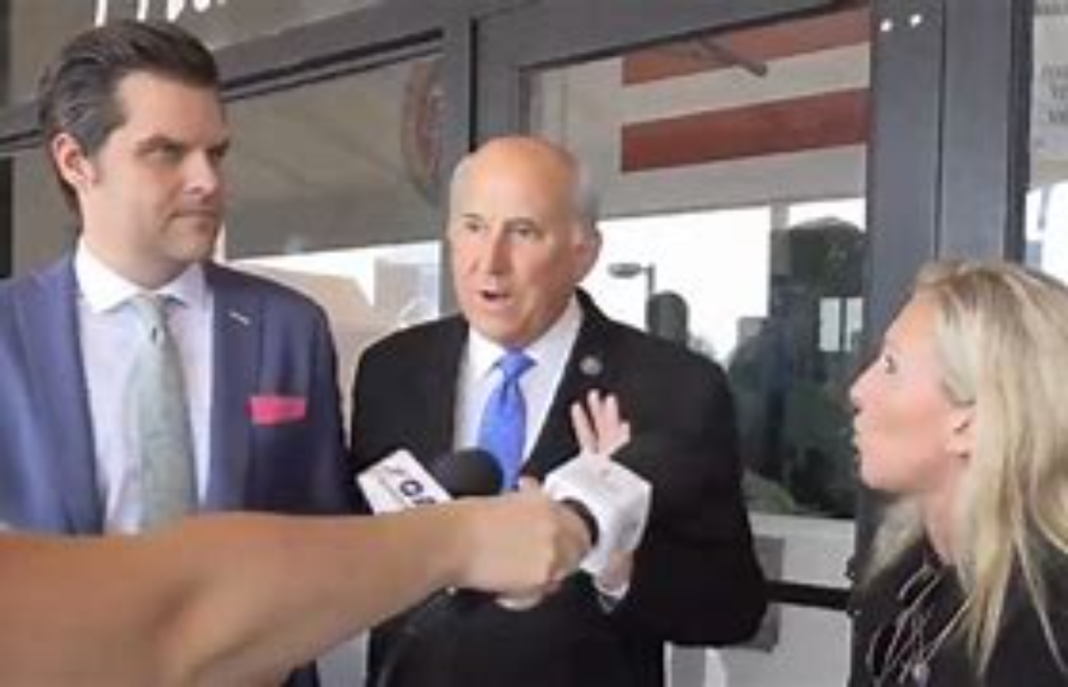 Representatives Louie Gohmert (Texas) and Marjorie Taylor Greene (Ga.) were again denied entry into DC Jail to check on the conditions of the January 6th prisoners today. (The duo had visited DC Jail back in June with Republican Reps. Matt Gaetz (Fla.) and had been turned away by the D.C. Department of Corrections.)

“What do you have to hide here?,” Rep. Greene could be heard saying today on a video she posted on her Twitter account. “Really, what are you hiding? I would like to see the whole facility. I am concerned with every single person staying here.”

The duo was seen speaking to the Deputy Warden, who refused the House members entry into the jail. She asked if there was anything else she could do to help, to which Gohmert replied:

“We have already called, maybe you have a better number. We have called, we have written and this place is like a tomb when it comes to people that want to make sure you are abiding by the law.”

(We at Gateway Pundit tried calling the number the Deputy Warden gave in the video (202) 673-7316 and the DC Jail number listed (202) 698-4932 and only reached answering machines. No live person was available. We left messages and are waiting to hear back for comment.)

“We actually have approval,” Greene told the Deputy Warden in the video. “We are members of Congress and we have oversight over The District of Columbia jails. You can open this door and give us a tour.”

“There is a person being held here that is his constituent,” Greene continued to tell the Deputy Warden. “He has every right to see him. These people are being held pre-trial, they have not had their day in court yet. You cannot deny them visitors. You can’t. So you’re completely, you’re completely out of line in your position.”

“For months and months and months,” chimed in Gohmert. It seems like the only way we are going to get approval is to get the federal judge to hold, perhaps, Deputy Warden here in contempt.”

“And I hope there isn’t evidence shown that these people are being abused in this jail,” said a frustrated Greene. “That’s not gonna go well for everyone that works here.

“And the stories of the people that work here for you telling other inmates that these are the worst of the White Supremacists,” Gohmert can be heard saying. This is in reference to a letter that Gateway Pundit recently first published from Nathaniel DeGrave, which went viral and has since gotten the attention of Congress.

“Are we done?” interjected the Deputy Warden, ignoring Gohmert and looking at Greene. “Are we done? Okay.”

“When you open the door, I am happy to be done,” replied Gohmert.

When you have approval to come in, you can come in,” said the Deputy Warden. “But for now we are done.”

“But you’re the one that can give us that approval,” said an exasperated Gohmert,

“Were finished,” replied the Deputy Warden.

According to January 6th Defense Attorney attorney Joseph McBride, Gohmert has two times attempted to see his constituent Nichols to perform a wellness check and to examine the conditions the January 6th defendants are being held under.

“Louie Gohmert represents Ryan Nichols before Congress, he is his elected voice,” said McBride. “He is constitutionally entitled to perform a wellness check on Nichols in order to be able to be able to report back to the Congress on Ryan’s behalf.”

“This is clearly demonstrative of the fact that the DC Jail does not want the truth out about what they are doing to come out,” said McBride.

Georgia: PM Irakli Garibashvili has met with US Senators

Saudi Arabia:Tadawul Group to offer 30 pct of company’s capital in...