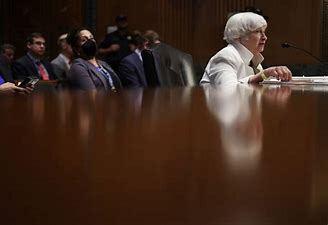 A week ago, Treasury Sec. Janet Yellen went on CNN and admitted that she’d been wrong about inflation. “I think I was wrong then about the path that inflation would take,” she told Wolf Blitzer. At the time it seemed like a planned admission but afterwards Treasury reacted as if it were a gaffe.

A Treasury spokesperson sends along this statement following Janet Yellen’s comment to Wolf earlier that she had been “wrong” last year about the path of inflation: pic.twitter.com/68XQujWvXb

Today, Yellen testified before the Senate Finance Committee and went further than just admitting she was wrong. Now she admits inflation is going to be with us for a while.

“I do expect inflation to remain high although I very much hope that it will be coming down now,” Yellen told the Senate Finance Committee during a hearing on the agency’s latest budget request. “I think that bringing inflation down should be our number one priority.”

Her hopes on the matter don’t seem very relevant especially given her recent history on this issue. Here’s video of Yellen belatedly stating the obvious.

NOW – Yellen: “I do expect inflation to remain high…” pic.twitter.com/igMyFZHZHs

She then claimed we were in the midst of a transition to a stable growth under the wise hand of President Biden.

“We now are entering a period of transition from one of historic recovery to one that can be marked by stable and steady growth,” she said. “Making this shift is a central piece of the president’s plan to get inflation under control without sacrificing the economic gains we’ve made.”

I’m sure the White House is happy she repeated that talking point for the cameras but in reality no one can guaranteed a smooth transition or a soft landing at this point. It remains a distinct possibility that the Fed’s belated efforts to deal with inflation will result in a recession. Speaking of which:

A widely followed Federal Reserve gauge is indicating that the U.S. economy could be headed for a second consecutive quarter of negative growth, meeting a rule-of-thumb definition for a recession.

In an update posted Tuesday, the Atlanta Fed’s GDPNow tracker is now pointing to an annualized gain of just 0.9% for the second quarter.

Following a 1.5% drop in the first three months of the year, the indicator is showing the economy doesn’t have much further to go before it slides into what many consider a recession.

In other words, we might already be there though we don’t know it yet. What she’s saying about a transition to stable growth is pure happy talk. And as the President himself has admitted, fighting inflation is primarily the Fed’s job, not his. The Fed is intended to operate independently so the idea Joe Biden is guiding this according to his plan is just nonsense.

Sec. Yellen was also asked about her previous talking points, the ones she was issuing last year when she claimed any inflation would be “transitory.” She now admits that was a mistake too.

As for earlier pronouncements by Yellen and Powell that the U.S. inflation problem was transitory, Yellen allowed, “Both of us could have used a better word than transitory. There’s no question that we have huge inflation pressures. Inflation is really our top economic problem at this point.”

Of course the real issue isn’t her word choice. She could have said inflation would be “temporary” or “short-term” and she would have been just as wrong. That’s the point. Her job was to read the signs and anticipate what was coming and instead she went along with what President Biden and the White House were saying at the time.

Andrew Yang is no longer a Democrat

Here’s What Marjorie Taylor Greene Said That Is Making Headlines