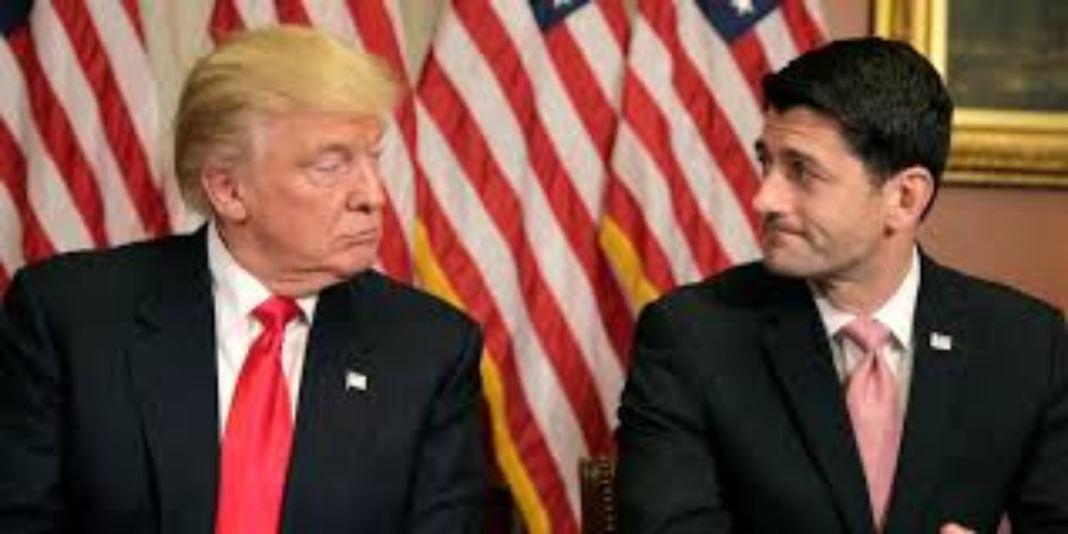 Asked for reaction to news of what Ryan will say in his speech tonight, Jason Miller replied to the NYT: “Who is Paul Ryan?”

Which is the second-funniest thing to come out of this. The funniest is that, for all the hype about Ryan criticizing Trump in this evening’s address to the Reagan Presidential Library, he … won’t quite bring himself to say Trump’s name.

The only time Trump is mentioned in Ryan’s prepared remarks, according to CNN, is when Ryan praises him.

Maybe it’s irony? What better way to demonstrate that the GOP is completely in Trump’s grip than to show that you yourself are afraid to criticize him directly despite having left public office years ago?

“Once again, we conservatives find ourselves at a crossroads. And here’s one reality we have to face: If the conservative cause depends on the populist appeal of one personality, or on second-rate imitations, then we’re not going anywhere. Voters looking for Republican leaders want to see independence and mettle,” Ryan is expected to say…

“As the left gets more ‘woke,’ the rest of America is getting weary. It’s exhausting. And we conservatives have to be careful not to get caught up in every little cultural battle,” he will say. “Sometimes these skirmishes are just creations of outrage peddlers, detached from reality and not worth anybody’s time. They draw attention away from the far more important case we must make to the American people.”

The line about “outrage peddlers” waging culture war is an interesting one coming from a guy who sits on the board of the Fox Corporation and thus has at least theoretical influence over Fox News’s primetime programming, influence which he apparently refuses to exercise. The line about voters allegedly seeking Republican leaders with “independence and mettle” is less interesting because there’s zero evidence that it’s true. The two most “independent” politicians in the GOP right now are Liz Cheney and Adam Kinzinger and they’re both likely to be primaried successfully next summer for their blasphemies against Trump.

Republican voters are so uninterested in “independence and mettle,” in fact, that Jeb Bush’s own son has been busy lately prostrating himself before Trump, recognizing that doing so is the only way he stands a chance of defeating Ken Paxton in next year’s primary for Texas attorney general:

Throughout Trump’s various scandals and controversies, George P. Bush never spoke out against him. He even went so far as to publicly back the ouster of Wyoming Rep. Liz Cheney — daughter of George W. Bush’s vice president — from House GOP leadership for her vote to impeach Trump after the Jan. 6 U.S. Capitol riot.

“Don’t get me wrong: George P. has played this exactly right, and he’s definitely more conservative than his dad, and Trump knows that,” said one Trump confidante who discussed the race with him recently. “But I can tell you the president enjoys the prospect of knowing how much it kills Jeb that his son has to bend the knee and kiss the ring. Who’s your daddy? Trump loves that.”

Imagine bending a knee to a guy who humiliated your own father and who enjoyed humiliating him, just to advance your own career. That’s the “independence and mettle” that Ryan can expect from the next generation of Republican leaders.

The punchline is that Trump will probably end up endorsing Paxton, who’s gone above and beyond to ingratiate himself to the former president. (It was Paxton who filed the Texas election lawsuit on which Trump pinned his hopes in December.) But George P. Bush can live with that. All he wants is for Trump to speak fondly of him, which Trump has, as that’ll create “permission” for Texas Republicans to support him over the scandal-prone Paxton in the AG race.

Such are the calculations that young GOP politicians of “independence and mettle” are given to make in 2021.

One amusing footnote to Trump’s looming reemergence as a political figure, with rallies allegedly being planned for next month, is the number of news stories trickling out this week about Washington Republicans who are exasperated by the prospect but afraid to say so on the record. One senior aide to a top Trump-supporting House Republican told Politico, “If we win the majority back in 17 months, it’s going to be in spite of Trump — not because of Trump. He will totally take credit if we win the House back — but it won’t be because of him. This guy is a disaster.” A different Politico story claims Trump has told confidants that he’ll run again in 2024 if his health holds up, news that’s not being received well by some. “He’s one of the best presidents we’ve had in terms of policies. But having said that, if it were up to me, I would never have Trump on any ballot ever again because it’s such a distraction,” said one House Republican.

I wonder what they’re so worried about. Ah, right:

Having Trump out on the trail pounding Democrats over inflation and rising violent crime would be fine with McCarthy and McConnell. Having him out there muttering about stolen elections is less fine, especially now that Liz Cheney has been excommunicated allegedly because she won’t stop revisiting the same topic. But Trump is Trump and he’ll carry his own message, not the party’s. If they don’t like that, too bad. The “conservative cause” described by Ryan, to the extent that it still exists in any meaningful way, really does depend on the populist appeal of one personality. That’s how the party’s voters want it so that’s how it is.

I mean, Republican pols are already speculating about the political consequences of Trump being indicted and wondering if it would hinder him at all in a primary, such is the degree to which the party now operates as a cult of personality. Legal experts are even gaming out whether he could assume the office of president while in prison. That’s where things stand civically in America.

Exit question: If Trump ends up not running in 2024 after all, could the guy from Florida succeed him? Not Ron DeSantis. The other one.