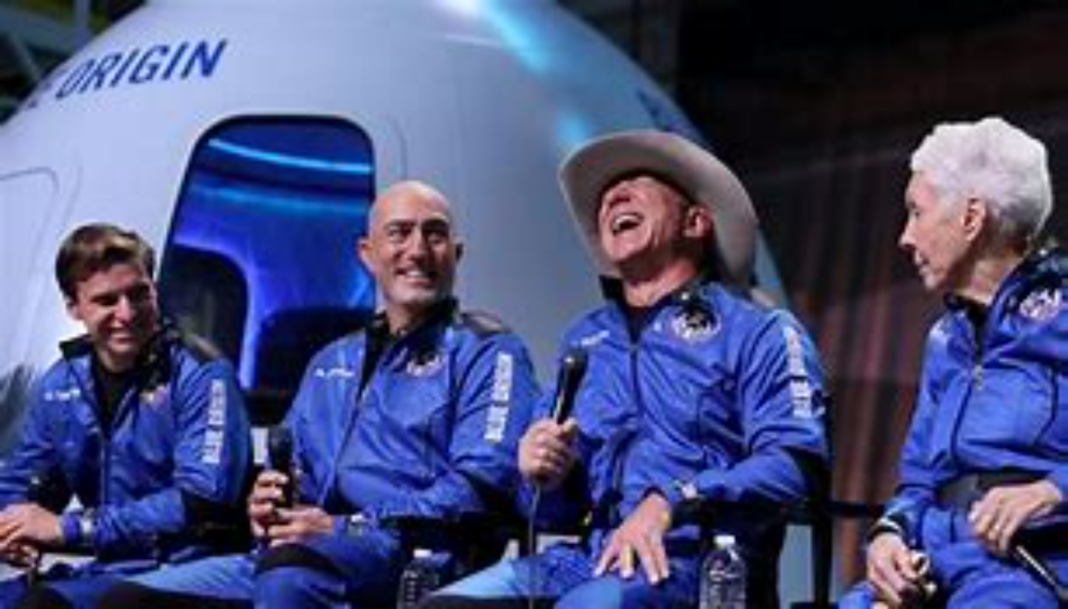 The usual scolds are upset at Jeff Bezos and Richard Branson for their private space-travel ventures — today of all days, on the 52nd anniversary of the moon landing. MSNBC’s Talia Lavin gives us a textbook sample:

Jeff Bezos’ live Blue Origin space launch is the pinnacle of waste. Private space flight is possible because of the ultra-wealthy ignoring the rest of the world’s problems….doctor bills and rent remain unalleviated, and the racial disparities inherent in the refrain seem ever starker, enshrined in new voter-suppression legislation around the country and in the disproportionate death toll of the pandemic on communities of color. But a new “flying circus” has arisen nonetheless — another race to space, even more ludicrous than before, with a rarefied circle of lily-white billionaires serving as well-heeled ringmasters…

“America has reached the stars but has not reached out to her starving poor,” the civil rights activist Ralph Abernathy said at a 1969 protest at Cape Kennedy….Nonetheless, there was, arguably, something noble about the space program of the 1960s: It may have been mired in the bitter and petty rivalries of the Cold War, and limned by prejudice about who could excel, but it was a project funded and created by our government, an achievement held in common by the masses…In this billionaire battle, there is no pretense at a sense of collective pride or communal achievement.

Leave aside the fact that the government spent massively more money fighting poverty in the 1960s than it did sending a man to the moon, yet five decades later, poverty remains undefeated. Leave aside also the incoherence of arguing that we should be spending more money on various social programs and yet finding it worse, not better, that this round of space exploration has not asked for taxpayer support. The fact is, we can feel national pride in the accomplishments of our fellow citizens — inventors, athletes, artists, healers, explorers, captains of industry — even if they were not funded by forced exactions from our pockets by the taxman. (In fact, as Bezos himself acknowledged, the money for this adventure came from everyone who has voluntarily spent their own money shopping at Amazon). It takes a rather cramped view of what a community and a nation mean if you can feel a connection to your neighbors only when government is involved. And it takes a narrow view of humanity to only ever ask what immediate practical utility it has for people to do amazing things.

Yes, this is a vanity project by rich men. So what? It’s their money. Rich men’s vanity projects have a long history in this country, a history that often led to progress and to public benefit. Who owns your local sports team? Who commissions works of art? Who slapped their names and fortunes on museums and universities?

In 1853, Cornelius Vanderbilt constructed one of the largest steamships in the world, the North Star. It was larger than any steamer in the U.S. Navy at the time. Vanderbilt used it as a personal yacht to sail across the Atlantic. Steamboats had come swiftly to dominate the developed world’s rivers and harbors in the four decades since Robert Fulton’s time, and they had made Vanderbilt’s fortune, but they were still seen as risky for ocean crossings. This was still the age of the clipper ship. Vanderbilt was already the nation’s preeminent business magnate; at the time of the North Star‘s launch, Scientific American (which covered the voyage closely) noted that Vanderbilt “probably gives employment to more hands than any other one man in America.” Vanderbilt designed the North Star himself. Crossing the Atlantic in such a gaudy personal vessel and visiting England, Russia, Denmark, France, Spain, and Turkey, among others, made a great impression in the monarchical capitals of Europe. Observers were impressed not only by America’s rising ingenuity but also its remarkable social mobility. Vanderbilt, after all, was a self-made man (he never entirely learned to spell properly), not the scion of aristocracy — a fact much noted by the British press in particular. The ship was studied by engineers and shipbuilders everywhere he went. Vanderbilt himself would continue improvements in steamship construction and commerce for the next decade, building on what he learned. His next big leap forward, the Vanderbilt, was constructed in 1855; he ended up “selling” the ship, which cost nearly $1 million in 1855 dollars to build, to the Navy in 1862 for $1 to aid the Union in the Civil War. The Union and Confederate navies both considered this a great asset to the Union, as the ship could outrun the famous Confederate raider the CSS Alabama, and it was used to protect convoys.

Vanderbilt was the Jeff Bezos of his day, and perhaps then some; he was a cold-eyed, ruthless businessman who amassed a fortune too large to know what to do with it all. The public never loved him. But American readers still thrilled at tales of his yacht’s voyage, and it paid dividends to American seamanship, commerce, national pride, reputation, and, ultimately, national defense. All because one really rich guy wanted to sail a big boat across the ocean for his own enjoyment.