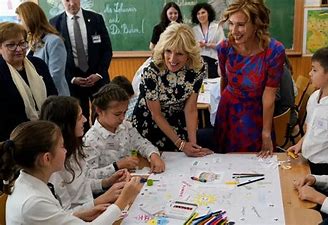 Jill Biden made an unannounced trip across the Ukraine border today for a Mother’s Day visit with Ukraine’s First Lady Olena Zelensky. It was the first time Mrs .Zelensky has appeared in public since Putin invaded Ukraine on February 24. Jill’s trip into Ukraine makes her the highest-profile member of the Biden administration to go into the war zone.

Credit when credit is due. Biden went into Ukraine, something that her husband, the President of the United States, did not do when he was in the region recently. In other words, the first lady is doing what the leader of the free world refuses to do. Just last week, Speaker Nancy Pelosi went to Kyiv to meet with President Zelensky. I’m no fan of either woman but they deserve recognition for making the trip to show support for Ukrainians during Putin’s war.

‘I wanted to come on Mother’s Day. I thought it was important to show the Ukrainian people that this war has to stop and this war has been brutal and that the people of the United States stand with the people of Ukraine,’ she said.

Unlike when Secretary of State Blinken and Defense Secretary Austin went to Ukraine, Jill Biden’s visit was not announced in advance for security reasons. At the time I thought it was a bone-headed and dangerous move to make the announcement about Blinken and Austin, but it’s Team Biden and this is what they do. Jill is on a four day trip to Romania and Slovenia. I wrote about her trip a few days ago and said the wrong Biden was going. I criticize Joe Biden for not going to Ukraine to show support for Zelensky because his absence makes him look weak. Biden said during his trip to Poland that he wants to visit Ukraine but “they” won’t let him. That is a frequent excuse used by Biden – that others are making the decisions – and it makes him took as though he is not the person in charge. While many of us believe it is others pulling the strings behind the scene, including the aggressive and ambitious first lady, it isn’t something Joe should be admitting out loud for the world to hear.

Jill Biden remained in Ukraine for about two hours. She did the soft kind of diplomacy that is traditionally done by first ladies. She and Olena visited a school and they spoke with mothers and their children. It was all very touchy-feely and that was the purpose. She was there to put the humanitarian crisis of Putin’s invasion of Ukraine in the spotlight.

The first lady attended mass in a tent during her visit to the border. She wore a pink and white flower corsage sent to her by the president in honor of Mother’s Day. And she was accompanied by Slovakian Prime Minister Eduard Heger and his wife Lucia Hegerova.

‘We pray for the people of Ukraine,’ the priest said in the opening blessing.

She visited the series of tents, a few hundred yards from the Ukraine border, that were set up by various NGOs to assist the refugees.

She met volunteers who provide psychosocial support services to refugees and a tent operated by Slovak Catholic charities with food and other supplies.

The tent was stacked with gently used toys and pre-loved stuffed animals for children along with boxes of baby formula.

Biden also dropped in at the Tomasikova Street School, a Slovakian public school that has taken in displaced students. About 60 Ukrainian students attend there, which has offered Slovak language classes to support greater integration.

She was offered bread dripped in salt upon her arrival, which is a traditional Slovak welcome. She ate the bread and watched the students perform a song.

‘I just wanted to come and show you our support,’ Biden said.

The kids were making art projects for Mother’s Day and one by offered the first lady a drawing. It included a cat and Biden told him: ‘I have a cat.’

Olena Zelensky was appreciative. Jill Biden gave her a bouquet of flowers upon arrival.

‘First of all, I would like to thank you for a very courageous act,’ Zelensky said through a translator.

‘Because we understand what it takes for the US First Lady to come here during a war when the military actions are taking place every day, where the air sirens are happening every day even today,’ she said. She and her children have been in a secure location during the war.

‘We all feel your support and we all feel the leadership of the U.S. president but we would like to note that the Mother’s Day is a very symbolic day for us because we also feel your love and support during such an important day,’ Zelensky said.

I thought that the story of Jill Biden’s second solo trip overseas as first lady would end up revolving around how she brought a few gallons of Heinz ketchup to the military base in Romania because American troops there had run out of the condiment.

On the eve of her trip overseas, Biden sat down with MSNBC’s Symone Sanders and spoke about the Supreme Court leak. She said it is a call to action, especially for young women, and encouraged voters to get out and support pro-abortion candidates.

Kudos to Jill Biden for doing what her husband refuses to do. If the argument is that it is too dangerous for the president to go into Ukraine, why is it safe for his wife, the first lady, or the Speaker of the House to go? Presidents have visited war zones in the past. They do it with secrecy in advance of their arrival. The president has plenty of physical protection. He should go.

Tomorrow, May 9, is Victory Day in Russia. To counter the celebration that Putin is planning, a small group of diplomats will return to the U.S. embassy in Kyiv as a show of support for Ukraine. The Ukraine ambassador to the U.S., Oksana Markarova, said today that Ukrainians will concentrate on celebrating the 77th anniversary of VE Day.

I’ll end with this video of U2’s Bono and the Edge performing in a metro station in Kyiv as a show of support of Ukrainians. It was called a freedom concert.

“Your president leads the world in the cause of freedom right now…The people of Ukraine are not just fighting for your own freedom, you’re fighting for all of us who love freedom,” Bono told a crowd of up to 100 gathered inside the Khreshchatyk metro station. He was referring to Ukrainian President Volodymyr Zelenskiy.

Kyiv now. The legendary Bono from the U2 band with Taras Topolia (“Antytila”) performs at the Khreschatyk metro station.#StandWithUkraine️ pic.twitter.com/suzkCVvgKt