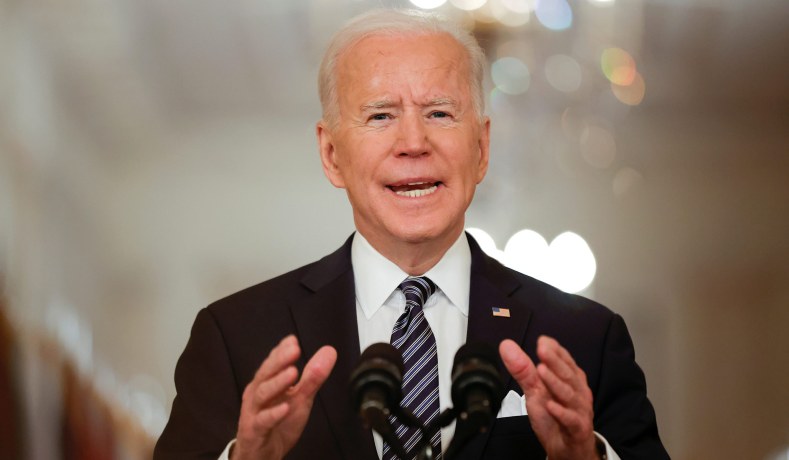 My colleagues John McCormack and Isaac Schorr have already noted the dishonesty and the hopelessness, respectively, of Joe Biden’s speech on one year of coronavirus last night. Isaac zeroed in on one selection from Biden’s speech:

If we do all this, if we do our part, if we do this together, by July the Fourth there’s a good chance that you, your families and friends will be able to get together in your backyard or in your neighborhood and have a cookout and a barbeque and celebrate Independence Day. That doesn’t mean large events with lots of people together, but it does mean small groups will be able to get together.

Set aside the conceit and misunderstanding of his constitutional role — the president doesn’t have the power to stop or allow us from gathering or barbecuing together — it seems inconceivable that Biden is this unaware of conditions on the ground around the country. People have been gathering in small groups in their backyards since late last April, and by last Fourth of July, they were already celebrating not in small pods, but in the large groups that Biden says will still be off-limits nearly three and a half months from now. . . . It speaks to a fundamental disconnect with the people of this country that Biden believes he can sell a kind of half celebration of a major holiday as some kind of victory or even an accomplishment of his administration.

All true. But there’s another aspect of Biden’s Fourth of July promise that really bothers me. Since our country’s Founding, we have used the Fourth to celebrate not only our national independence, but also to assert our rejection of government authority generally. It is an essential part of the American character to bristle at government imposition. So it’s very strange for Biden to choose this date as a benchmark. And there’s something very odd, and a bit un-American, about Biden’s saying that returning to (something like) normal life by then “will make this Independence Day something truly special, where we not only mark our independence as a nation but we begin to mark our independence from this virus.”

Set aside that it will also mark our independence from over-intrusive government regulations (again), and that, in the course of his speech, Biden again lapses into some decadent Obama-era bromides about how we are the government:

We need to remember, the government isn’t some foreign force in a distant capital. No, it’s us, all of us, we the people. For you and I, that America thrives when we give our hearts, when we turn our hands to common purpose.

The most egregious part of all this is the seeming attempt by the president to use the somewhat-suspect aegis of “public health” to encroach upon the fundamentally American spirit of liberty, to mix up positive liberty (goods granted by the state) and negative liberty (freedom inherent in all of us) in such a way as to render them difficult to distinguish.

It actually reminds me a bit of the United Kingdom’s National Health Service. Over the course of the pandemic, the U.K.’s government-run health-care system has taken on an even more religious character for many citizens there than it had before (and that’s saying something; recall its prominent and worshipful place in the 2012 Olympic opening ceremonies). It just so happens that the NHS was founded on July 5, a date that this year Britons were urged to celebrate as a kind of holiday.

Biden’s attempted co-opting of our national holiday celebrating freedom from government bears an eerie resemblance to this culture of state worship across the pond. But the peril of identifying freedom as something the government gives you is forgetting that it can just as easily take things away. Indeed, Biden hinted at this last night:

. . . if we don’t stay vigilant and the conditions change, then we may have to reinstate restrictions to get back on track. And please, we don’t want to do that again. We’ve made so much progress. This is not the time to let up.

Just as we were emerging from a dark winter into a hopeful spring and summer is not the time to not stick with the rules.

This doesn’t sound very American to me. Joe Biden should leave the Fourth of July alone, or at least leave it to presidents who know how to use it to motivate people during a crisis properly: