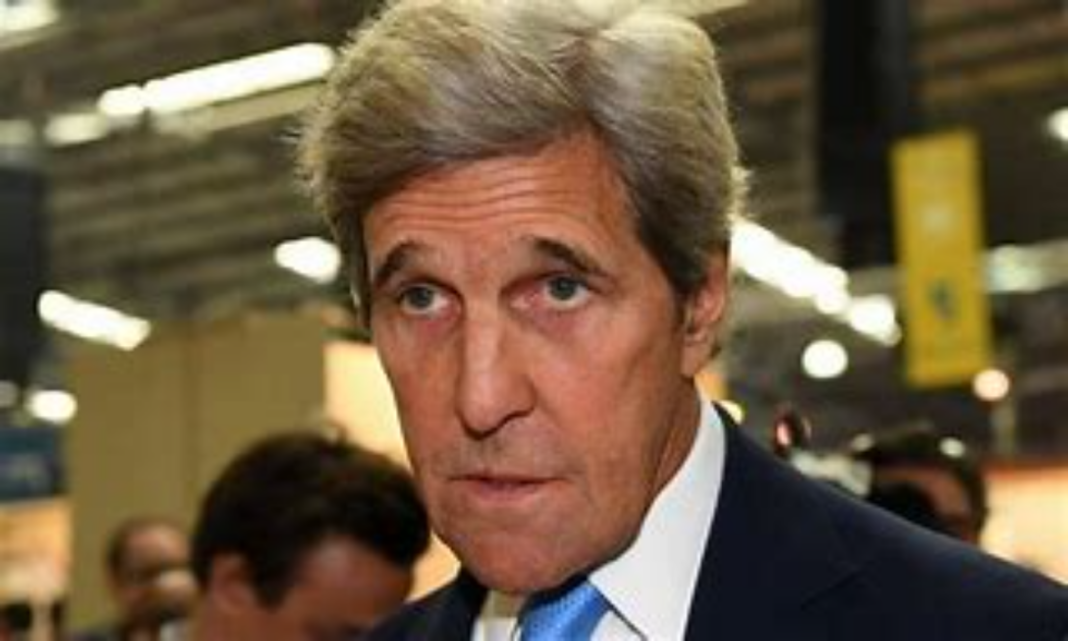 US climate envoy John Kerry just wrapped up two days of meetings with his Chinese counterparts to press them for quicker action on climate change. Kerry’s goal was reportedly to get China to agree to limit the funding of new coal plants and to commit to a peak in carbon emissions by 2030. After the meetings were over, Kerry claimed there had been progress. “We made some progress. That’s the bottom line,” Kerry told the Washington Post. He added, “In diplomacy, you don’t always get everything you want in one fell swoop.”

It’s certainly true that you often don’t get everything you want but the Post reports it’s not clear that Kerry got anything at all:

There was no immediate indication that Beijing would agree to speed up its timeline for reducing emissions. China is the world’s largest carbon emitter, followed by the United States, and Kerry has been hoping to get Beijing’s cooperation ahead of a United Nations climate summit in Glasgow, Scotland, in November.

Instead, China’s Foreign Minister Wang Yi demanded that Washington first address its “two lists” — a sprawling account of grievances that included sanctions on Chinese officials and U.S. extradition efforts against Huawei executive Meng Wanzhou — according to a summary published by the Chinese Foreign Ministry on Wednesday.

Meanwhile, the South China Morning Post, which is a Hong Kong newspaper that presents a China-friendly view of the news, was more blunt about the outcome of the meetings:

Beijing has rebuffed American calls to make more public pledges on climate change before a UN climate summit in November, insisting it should follow its own plan rather than bowing to US pressure, according to a person familiar with the two countries’ negotiations…

…the two sides failed to reach agreement, according to the source, who requested anonymity.

“China already has its own plans and road map for achieving its climate goals,” said the person, adding China would not accept Washington telling it what to do and when.

So Kerry walked away with bupkis except demands from China that the Biden administration drop sanctions against Chinese solar panels which are partly manufactured in Xinjiang. The not so subtle message to the US was this: If you want cooperation on climate change, keep your mouth shut about the re-education camps and prisons full of Uighurs.

While I’m not surprised to see Kerry’s outreach to China fail completely, I will say that he’s essentially right about one thing. There’s really no point in pursuing an expensive scheme to eliminate fossil fuels from the economy if China isn’t on board. As I’ve pointed out before, China and India are responsible for just shy of 90% of the increase in CO2 being put into the atmosphere over the last decade. China alone is responsible for 69% of the increase. Even CNN can see the problem:

China’s greenhouse emissions largely come from coal — which generated over half of the country’s energy in 2019. The country’s emissions far outpace other developed nations. The nonpartisan Rhodium Group found China emitted 27% of the world’s total emissions in 2019, compared to 11% from the US, 6.6% from India and 6.4% from the European Union.

The US is busy shuttering nuclear and coal plants. Here in California, we get warnings all summer about the need to limit power usage or risk an outage. Meanwhile, China gave out more permits for new coal plants last year than it did in 2018. I really can’t improve on this point made by Megan McArdle a couple years ago.

Pushing the US economy to zero emissions won’t fundamentally alter the problem because–and this is important–if we stop using fossil fuels, they actually get cheaper for everyone else, making developing countries more likely to develop in carbon-intensive ways.

China stands to benefit by allowing us to take the financial hit from expensive climate change commitments while they continue to use cheap fossil fuels and promise to make change a priority at some later date once their economy has grown even larger. Maybe John Kerry knows this even if he would never say it openly for fear of being undiplomatic.