Roce Today – Politics, Opinions, Gun Rights,Pro-Life and Border Wall
Home Politics John Podesta Is Back In The White House. Here’s Why You Should... 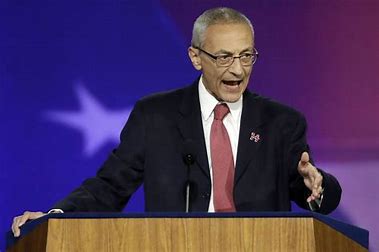 John Podesta, a famed political operative who cut his teeth in three Democrat administrations, is back in the White House. This time, Podesta sits in a key transactional position where he will spearhead President Joe Biden’s climate initiatives, which should concern all Americans.

On Sept. 2nd, the White House announced that John Podesta would serve as senior adviser for Clean Energy Innovation and Implementation, where he will oversee the implementation of the $370B in green energy funds included in the partisan reconciliation package that Democrats passed in August.

Podesta will serve as chair of the president’s National Climate Task Force in support of this effort where he will be tasked with distributing the funds. The timing of Podesta’s hiring also comes as Biden is considering a 2024 presidential run.

The Economist noted the recent shift of the U.S. federal government playing a more significant role in an industrial policy that closely resembles that of the Chinese Communist Party (CCP).

The bipartisan infrastructure bill included $20B in clean-energy incentives and $8B towards creating electric vehicle charging stations. The CHIPS+ bill had $52B towards chips production and $170B towards research.

Taken all together, it adds to about $100B in annual spending over the next five years. Much of the scientific funding would need to be approved by Congress next year, which gives Republicans some leverage.

Podesta would have responsibility for structuring the law’s grant programs, clarifying language for tax credits, and touting its economic potential to create jobs, Politico reported. Up to this point, he will have now played a role in three of the last Democratic administrations.

He founded the Podesta Group, a lobbying firm, along with his brother Tony in 1988. Chinese technology firm Huawei has retained Podesta’s brother Tony as a lobbyist, Politico reported.

The White House has not instituted any special recusals, prohibitions, or other barriers for Podesta, even though he had backed several climate lobbying efforts before joining the administration, RealClearPolitics reported. The outlet calls attention to Podesta’s long relationship with Hansjörg Wyss, a Swiss billionaire as something that could raise red flags.

Wyss had been a financial backer of many environmental groups and progressive causes, The New York Times reported.  Recipients of those funds later backed progressive causes almost exclusively and helped Democrats as they regained control of the White House.

Wyss was also one of the early financial supporters of the Center for American Progress (CAP), a liberal think-tank founded by Podesta in 2003 to provide a progressive counterweight to the conservative Heritage Foundation. Podesta served as its president and CEO until he stepped down in 2011.

Critics see the appearance of a foreign billionaire funding a think-tank to generate research and a lobbying effort that claims climate change is terrible to produce legislation that would benefit his green energy investments and has now installed someone from that think-tank to distribute the funds to the benefit of Wyss and other green energy investors.

Republicans will raise questions of potential conflicts of interest in having someone like Podesta, who is unaccountable and has been through the revolving door several times between senior government positions and the influence industry.

Democrats will argue that Podesta’s early recognition of the threats posed by climate change gives him more credibility on the issue and that his prior government service should be viewed as an asset, rather than a liability, in being able to distribute funds effectively by being more familiar with the government bureaucracy.

Podesta’s background as chair of Hillary Clinton’s 2016 presidential campaign suggests that he may have been brought in to distribute some of the funds to ensure they have the maximum political benefit entering the 2024 presidential race.

Some question why electric vehicles need subsidies and bans on gasoline-powered cars if they are much better than the alternative. Climate change activists point out that electric vehicles emit fewer greenhouse gases than gasoline cars. However, creating batteries for electric vehicles requires burning coal in place like China, where most battery producers are located, and extracting rare earth minerals like Cobalt in Congo that often rely on child labor for mining.

This shortage of available materials is one reason that electric cars are currently prohibitively expensive for most families.

Whenever the federal government is handing out billions of dollars, there are opportunities for waste, fraud and abuse.

The Solyndra scandal still haunts Democrats from the Obama era after the solar power company received more than $500M in taxpayer funds.