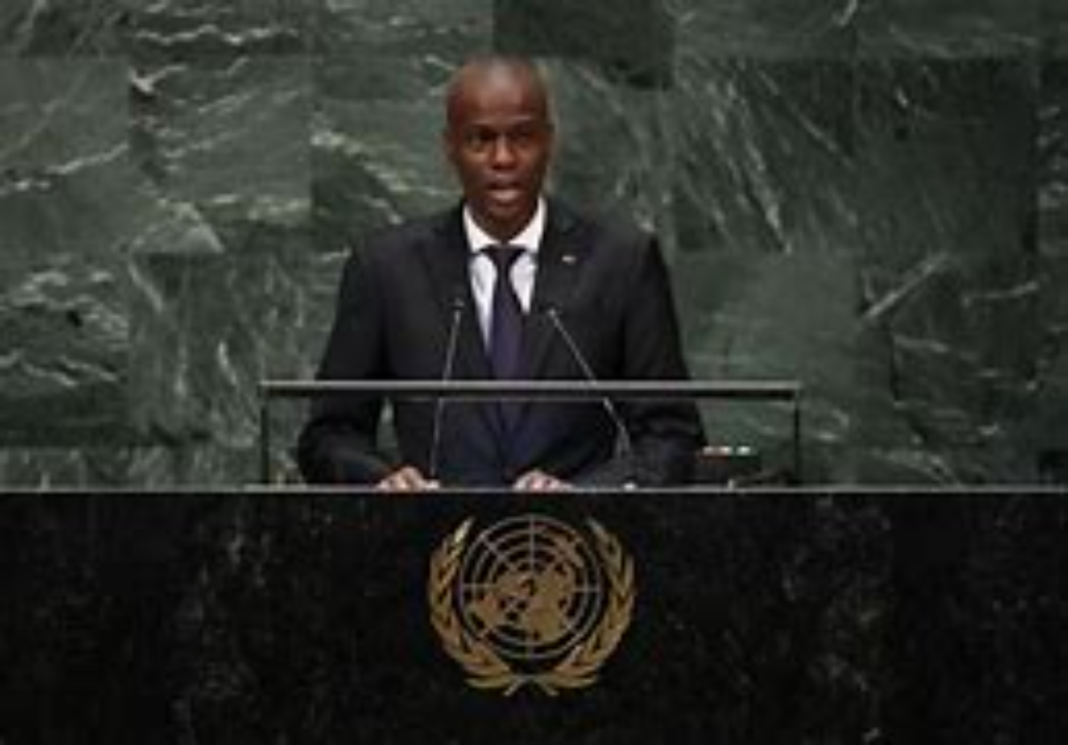 PORT-AU-PRINCE, Haiti — The head of Haiti’s national police announced Sunday that officers arrested a Haitian man accused of flying into the country on a private jet and working with the masterminds and alleged assassins behind the killing of President Jovenel Moïse.

Police Chief Léon Charles identified the suspect as Christian Emmanuel Sanon, without giving any personal information about him, though it appears he has been living in Florida. The chief also gave no information on the purported masterminds.

Charles said the alleged killers were protecting Sanon as the supposed president of Haiti, adding that officers found several items at his house, including a hat emblazoned with the logo of the U.S. Drug Enforcement Administration, 20 boxes of bullets, gun parts, four automobile license plates from the Dominican Republic, two cars and correspondence with unidentified people.

“We continue to make strides,” Charles said of police efforts to solve the brazen attack early Wednesday at Moïse’s private home that killed the president and seriously wounded his wife, Martine Moïse, who was flown to Miami and remains hospitalized.

Charles said a total of 26 Colombians are suspected in the killing of the president. Eighteen of them have been arrested, along with three Haitians. He said five of the suspects are still at large and at least three have been killed.

The chief said police are working with high-ranking Colombian officials to identify details of the alleged plot, including when the suspects left Colombia and who paid for their tickets.

Charles said Sanon was in contact with a firm that provides security for politicians and recruited the suspects, adding that the suspect flew into Haiti with them in early June. The men’s initial mission was to protect Sanon, but they later received a new one: arrest the president, the chief said.

“The operation started from there,” he said, adding that an additional 22 suspects joined the group and that contact was made with Haitian citizens.

Charles said that after Moïse was killed, one of the suspects phoned Sanon, who then got in touch with two people believed to be the intellectual authors of the plot. He did not identify the masterminds or say if police knew who they are.

The chief said Haitian authorities obtained the information from interrogations and other parts of the investigation.

It was not immediately clear if Sanon had an attorney.

Sanon has lived in Florida, in Broward County and in Hillsborough County on the Gulf Coast. Records show he has also lived in Kansas City, Missouri. He filed for bankruptcy in 2013 and identifies himself as a doctor in a video on YouTube titled “Leadership for Haiti.”

He also added: “This is a country with resources. Nine million people can’t be in poverty when we have so much resources in the country. It’s impossible. … The world has to stop doing what they are doing right now. We can’t take it anymore. We need new leadership that will change the way of life.”

The announcement of Sanon’s arrest was made hours after hundreds of Haitians sought solace in prayer at early Sunday church services as a political power struggle threatened to further destabilize their fragile country.

Roman Catholic and Protestant church leaders asked for calm and told people to remain strong as anxiety about the future grew, with authorities providing no answers or theories about who masterminded the killing by a group of gunmen early Wednesday at the president’s home. Martine Moïse, the president’s wife, was critically injured and was transported to Miami for treatment.

“Facing this situation, we will not be discouraged. … You must stay and fight for peace,” Father Edwine Sainte-Louis said during a sermon broadcast on TV that included a small picture of Moïse with a banner that read: “Haiti will remember you.”

Interim Prime Minister Claude Joseph is currently leading Haiti with the help of the police and military, but he faces mounting challenges to his power.

Ariel Henry, whom Moïse designated as prime minister a day before he was killed, has said he believes he is the rightful prime minister, a claim also backed by a group of legislators who are members of Moïse’s Tet Kale party. That group also supports Joseph Lambert, head of Haiti’s dismantled Senate, as the country’s provisional president.

Haiti, a country of more than 11 million people, currently has only 10 elected officials after it failed to hold parliamentary elections, leading Moïse to rule by decree for more than a year until his death.

While the streets were calm on Sunday, government officials worry about what lies ahead and have requested U.S. and U.N. military assistance.

“We still believe there is a path for chaos to happen,” Haiti Elections Minister Mathias Pierre told The Associated Press.

Pentagon chief spokesman John Kirby said on Fox News Sunday that the Pentagon is analyzing the request to send troops to Haiti and that no decisions have been made. He said a team, largely comprising agents from the Department of Homeland Security and the FBI, were heading down to Haiti “right now” to help with the investigation of the assassination.

”I think that’s really where are our energies are best applied right now, in helping them get their arms around investigating this incident and figuring out who’s culpable, who’s responsible and how best to hold them accountable going forward,” Kirby said.

The United Nations has been involved in Haiti on and off since 1990. The last U.N. peacekeeping mission arrived in 2004 and all military peacekeepers left the country in 2017. But a stabilization group stayed behind to train national police, help the government strengthen judicial and legal institutions and monitor human rights. That mission ended in 2019 and was replaced by a political mission headed by an American diplomat, Helen La Lime.

In addition to helping normalize the country, the U.N. peacekeeping force played an important role after a devastating 2010 earthquake that killed as many as 300,000 people and after Hurricane Matthew in 2016. But U.N. troops from Nepal are widely blamed for inadvertently introducing cholera, which has afflicted over 800,000 people and killed more than 9,000 people since 2010. Some troops also have been implicated in sexual abuse, including of hungry young children.

“There are so many potential players who could be behind it,” he said, adding that the political strength of Pierre, the interim prime minister, is an open question. “There is going to be some jockeying for positions of power. That is one big worry.”

In Port-au-Prince, resident Fritz Destin welcomed a priest’s sermon urging people not to be discouraged.

“The country needs a lot of prayers,” he said. “The violence makes life a little uncertain.”