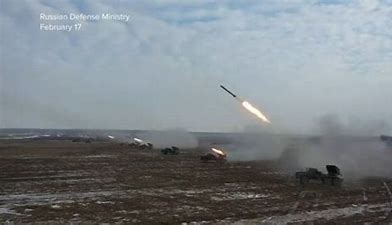 This feels like the flip side of the White House’s rhetorical game-playing about “invasions” versus “minor incursions.” How “minor” does an incursion need to be to avoid qualifying as an “invasion”?

Similarly, how restrained does the U.S. response to Russian aggression need to be to avoid qualifying as “major? The term is sufficiently vague that it can mean anything.

I’m going to guess that most people who were asked by the AP about a “major role” for the U.S. in the Ukraine conflict took it to mean “sending troops,” which we’re not going to do. In fact, if I’m right about how the question was interpreted, I’m surprised that as many as a quarter of Americans would be willing to risk a hot war with Russia.

Notably, more than three-quarters of Democrats and Republicans believe the U.S. should have *some* role in the conflict. The most isolationist cohort is independents and a majority of them think we should have a minor role as well.

Does slapping mega-sanctions on Russia count as the U.S. having a “major role”? Presumably the answer is “no” right now, before there’s been any blowback in the form of rising gas prices and accelerating inflation. Once that pain begins to be felt, sanctions may start to feel more “major” to voters.

The point of sanctions, in theory, is to deter aggression. That’s why Biden’s “first tranche” amounted to no more than a wrist slap, with the heavy economic artillery reserved as punishment in case the Russian military begins killing Ukrainians. If they stop where they are now, they’ll avoid the worst consequences. However, deterrence presupposes that one’s enemy is rational and will behave rationally in response to incentives. That’s a compliment U.S. policymakers have always paid to Putin: As much as we detest him for making trouble for us and our allies, we treat him as a calculating strategic thinker who acts logically in his own self-interest. He’s not some jihadist madman looking to rack up a body count wherever an opportunity might present itself. He’s a Bond villain, cold and cunning.

But … what if he isn’t anymore? This passage from the WSJ today is disquieting:

Mr. Macron noticed a change in Mr. Putin’s demeanor when speaking to him on the phone over the course of the pandemic.

“He tended to talk in circles, rewriting history,” a close aide to Mr. Macron said.

That impression hardened when Mr. Macron traveled to Moscow two weeks ago as part of a diplomatic push to avert an invasion, according to French officials.

“Mr. Macron found that Putin was more rigid, more isolated, and had basically gone into a sort of ideological and security-minded drift,” a French official said.

Much has been made lately of Putin refusing to allow visiting foreign leaders within 20 feet of him, seating them at the opposite end of an absurdly long table to ensure social distancing during COVID. “For almost two years, Mr. Putin has ensconced himself in a virus-free cocoon unlike that of any Western leader, with state television showing him holding most key meetings by teleconference alone in a room and keeping even his own ministers at a distance on the rare occasions that he summons them in person,” the NYT noted. His rambling speech on Monday justifying an invasion of Ukraine was less that of a Bond villain than an old man seated at a bar grousing aimlessly about his political grievances. “It may well be that after 20 years of acting like a Tsar, he has gone mad, like so many before him, and something crazy is coming,” journalist David Patrikarakos wrote afterward.

If so, he won’t be deterred. The only peaceful way out will be his own inner circle deposing him before he attacks a NATO country and plunges east and west into war.

Russia’s propaganda tricks lately don’t feel like the caliber of a Bond villain either. Experts have taken to laughing at how amateurish some of their false-flag theatrics have been so far. Sometimes you don’t need an expert to expose them, as in the case of this “shelling” that looks more like a cherry bomb popping off:

Russian TV with alleged shelling of journalists by #Ukraine. Judge for yourself how convincing you find it. pic.twitter.com/MjN6yzgsxo

This guy printed out a piece of paper with a date on it to assure his audience that he was most certainly recording live on that date:

NEW: The LPR claims mortar fire from Ukrainian forces hit a house belonging to occupants who had recently evacuated to Russia. The speaker holds up a paper with the date, 22.02.2022, in an apparent attempt to show that the incident wasn’t pre-recorded. pic.twitter.com/CWDaSzzfN7

It’s as if Putin has decided that it’s not worth bothering to manufacture a convincing pretext. He wants to begin the project of reconstituting Russia’s empire and the democracy next door is his first stop. That’s the only justification he needs.

Neither Russians nor Ukrainians agree with him that it’s time for Ukraine to come back in the fold, by the way:

Russians split 36/43 when asked if military force would be justified to reunite the two counties. But — notably — they split 50/25 when asked if war would be justified to prevent Ukraine from joining NATO. The more Putin can present his offensive as a defensive action, the more native support for it there’ll be. Which, again, makes it seem irrational that he’s not trying to concoct more plausible false-flag operations.

I’ll leave you with this result from another new poll, this one from Morning Consult. It seems to confirm my suspicion that only 20-25 percent or so of Americans are open to using troops but considerably more are willing to see sanctions imposed. A big flashing red light for Biden, though: 58 percent also said they’d blame him for rising gas prices. The political seas are about to get rougher for Dems.

Trump: The last election was “the scam of the century and...