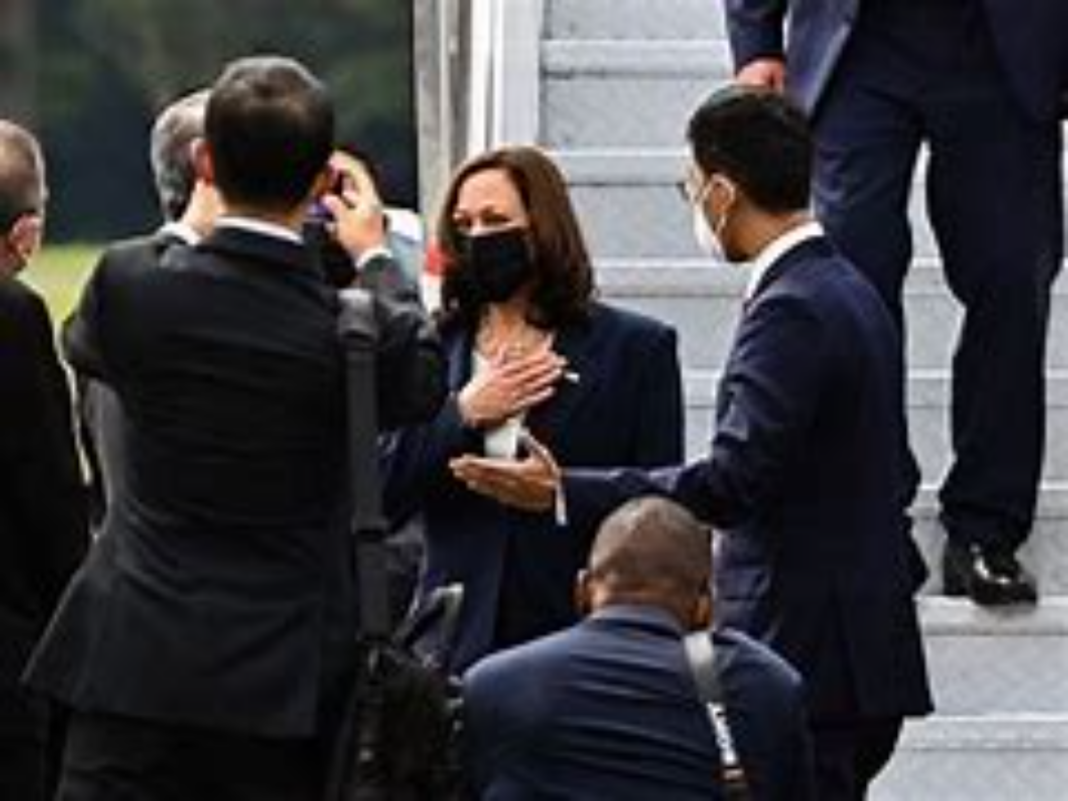 Kamala Harris is on her second trip overseas, representing Joe Biden to our allies in Southeast Asia. She delivered a foreign policy speech in Singapore Tuesday in which she presented the Biden administration’s vision for the Indo-Pacific. She took the opportunity to criticize China for its incursions in the South China Sea.

She said, “We know that Beijing continues to coerce, to intimidate and to make claims to the vast majority of the South China Sea. Beijing’s actions continue to undermine the rules-based order and threaten the sovereignty of nations.” Her mission is to reassure our allies that the United States supports them against Chinese aggression.

The speech sought to cement the U.S. commitment to supporting its allies in an area of growing importance to the Biden administration, which has made countering China’s influence globally a centerpiece of its foreign policy. And it came during a critical moment for the United States, as the Biden administration seeks to further solidify its pivot toward Asia while America’s decades-long focus on the Middle East comes to a messy end with the chaotic withdrawal from Afghanistan.

Harris underscored this shift, calling the Indo-Pacific “critically important to our nation’s security and prosperity.” She said that while the U.S. is focused on closing out its Afghanistan engagement by evacuating as many people as possible, “it is also imperative that as we address developments in one region, we continue to advance our interests in other regions, including this region.”

Does anyone believe her? Why would our allies overseas be open to trusting the United States right now with the disaster in Afghanistan happening now? It is clear to the world that Biden went it alone in the U.S. withdrawal and didn’t even bother to consult with our NATO allies on the ground. Biden even refused to take a call from Boris Johnson for two days when the full withdrawal began. British troops were rescuing Brits and Americans trapped and unable to get to the airport in Kabul, yet Biden wouldn’t even pick up the phone.

It was a tone-deaf decision to go ahead with the trip to Southeast Asia after the collapse of Afghanistan. Remember, she prided herself in saying she was the last person in the room when Biden decided to withdraw and she is completely comfortable with the decision. Yet, she hasn’t addressed Afghanistan during her trip, other than to cackle when she was asked about the situation by reporters.

A reporter attempted to ask about her “response on Americans” — but the VP cut her off before she could finish.

“Hold on, hold on — slow down, everybody!” Harris said, before letting out her now-notorious laugh, shaking her shoulders as she chuckled.

The VP finally controlled herself to insist that the Biden administration “couldn’t have a higher priority right now” than Afghanistan.

Tragically, it does not look like a “high priority” to anyone else paying attention. She also failed to address the conditions on the ground in Afghanistan when she spoke to a roundtable of business leaders in Singapore earlier in the day. Instead, she spoke about Christmas gift shopping and climate change. Yes, really.

Harris, addressing a roundtable of business leaders before her speech, warned that climate change and the pandemic have contributed to supply chain issues, The New York Times reported, and suggested parents should consider getting Christmas presents now.

‘The stories that we are now hearing about the caution that if you want to have Christmas toys for your children, it might now be might be the time to start buying them, because the delay may be many, many months,’ she said.

‘So across the board, people are experiencing the issue.

‘And, of course, the climate crisis is fueling a lot of this. When we look at the stronger typhoons that have disrupted shipping lanes and sea level rise, which threatens port infrastructure as an example. So these are the many issues that are that are causing these disruptions.’

VP Harris observing the Flower Dome in Singapore, including an orchid named after her. She answered a reporter’s question about supply chain issues before the press was escorted out while shouting questions about Afghanistan and other issues. pic.twitter.com/vqvVUaO0ax

Her visit and speech allowed China the opportunity to spread some anti-American propaganda against the United States and use Afghanistan as its justification.

Her rebuke to Beijing amounted to her sharpest comments yet on the U.S. foe. And China hit back, with Chinese Foreign Ministry spokesperson Wang Wenbin invoking Afghanistan in his response to a question about Harris’ comments, saying the messy withdrawal from Kabul showed the U.S. had lost credibility. He charged that the U.S. “can smear, suppress, coerce, and bully other countries at will in order to maintain America first, without paying any price.”

“This is the order that the U.S. wants. The U.S. always tries to make use of the rules and order to justify its own selfish, bullying and hegemonic behavior, but who still believe it now?” Wang said.

Thanks, Kamala. Our national humiliation at the hands of Stone Age barbarians continues. It sounds as though she was most interested in promoting trade, which we were told during the Trump administration was bad. Whatever happened to the Democrats’ concern about human rights? And, she said the U.S. isn’t looking to “make anyone choose between countries.” That’s an odd thing to say. Why isn’t she trying to move the needle with Singapore’s neutral position between the U.S. and China? Would it kill her to sound unabashedly pro-American?

Kamala met with Singapore President Halimah Yacob and Prime Minister Lee Hsien Loong on Monday. Reporters asked questions about Afghanistan but Kamala brushed them off, saying the Biden administration was focused on getting Americans and Afghan helpers out of the country.

Prime Minister Lee offered his country’s support for the U.S. decision to withdraw, however, and said Singapore was “grateful” for the U.S. efforts to combat terrorism in Afghanistan. He also offered the U.S. the use of the Singapore Air Force’s transport aircraft to help with the evacuation, and said the country is now watching what the U.S. does next.

“What matters is how the U.S. repositions itself in the Asia Pacific, engages the broader region and continues to fight against terrorism, because that will determine the perceptions of the countries of the U.S.′ global priorities and of its strategic intentions,” he said.

Kamala’s office announced a series of new agreements with Singapore. These are aimed at combating cyberthreats, tackling climate change, and addressing supply chain issues due to the pandemic. As with other agreements made with foreign countries, Team Biden didn’t disclose specifics, just sweeping statements.

She’s going to Vietnam for her second stop today. Harris is scheduled to meet with officials on Wednesday.