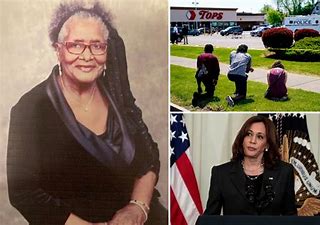 The shooter was an 18-year-old White man, an avowed White supremacist. The majority of the patrons at Tops supermarket are from the Black community. It was a deliberately planned attack on a specific group. There’s no argument that the mass shooting was an action made out of hatefulness. She attempted to temper her statement with a Biblical reference.

Harris said at the funeral that Scripture teaches about strength, and that strength is based on who “you lift up” rather than “who you beat down.”

“And it means then also, in that strength, understanding we will not allow small people to create fear in our communities that we will not be afraid to stand up for what is right, to speak up even when it may be difficult to hear and speak,” she said.

She continued, “Enough is enough.”

Kamala spoke about the pain of losing a loved one, especially during a senseless act of violence. Her speech lasted three minutes. This was the last of the funerals for the victims of the mass shooting and it was held at Mt. Olive Baptist Church. Her speech was not planned, according to reporting by the New York Post. It was Al Sharpton, who stood behind Kamala as she spoke, that called her up to speak. Many politicians were in attendance but she was the only one asked to speak.

The vice president and her husband, Douglas Emhoff, privately met with Whitfield’s relatives before the service, and later sat next to them in the front row during the service

Other elected officials in attendance included Gov. Kathy Hochul, New York City Mayor Eric Adams and state Attorney General Letitia James. Harris was not scheduled to speak at the funeral service, but only did so after the civil rights leader Rev. Al Sharpton asked her to address the audience.

During her three-minute speech at Mt. Olive Baptist Church, Harris noted other recent mass shootings that have devastated other parts of the country, saying “enough is enough.”

“The pain that this family is feeling right now and the nine other families here in Buffalo, I cannot even begin to express our collective pain as a nation for what you are feeling in such an extreme way,” said Harris while addressing hundreds who attended a funeral in Buffalo for Ruth Whitfield, 86.

“To not only lose someone you love, but through an act of extreme violence and hate. And I do believe that our nation right now is experiencing an epidemic of hate.”

Like other politicians, Kamala turned her appearance into a call to action for change. In this case it is over “assault weapons”. The term is a broad one but it is usually a reference to AR-15-style rifles. That type of weapon was used in the Buffalo mass shooting and also in the Uvalde mass shooting last Tuesday. Her call to action is to demand a ban on assault weapons.

That is a standard reaction after these horrific acts of mass shootings happen. After the funeral service, Kamala spoke to reporters before boarding Air Force Two. She called for such a ban.

She called the firearm a “weapon of war” that has “no place in civil society.”

“We are not sitting around waiting to figure out what the solution looks like. You know, we’re not looking for a vaccine. We know what works on this,” she told reporters outside of Air Force Two at the Buffalo Niagara International Airport, referring to the series of mass shootings that have plagued the U.S. “Let’s have an assault weapons ban.”

In both Buffalo and in Uvalde, the eighteen year old killers wore body armor and used legally purchased AR-15s. There is lots of conversation now about assault weapon bans and also on other measures that may be available in Congress to pass new legislation. Conversations are needed but what isn’t helpful is the grandstanding of politicians at public events.

Kamala tried to connect the dots from mass shootings in recent years.

“There’s a through line to what happened here in Buffalo, in Texas, in Atlanta, in Orlando, what happened at the synagogues,” she said, “and so this is a moment that requires all good people, all God-loving people, to stand up and say ‘we will not stand for this.”

The vice-president’s motorcade stopped outside the supermarket after the funeral. She and her husband laid a bouquet of flowers at the edge of the memorial and prayed for several minutes.

Today Biden and Jill are in Uvalde to show their support to the community. They plan to attend a church service with families while they are in town. Let’s hope President Unity remembers he is there to grieve and show support. Today is not the day for more political grandstanding and certainly not for the creepy old man whispering at a microphone.