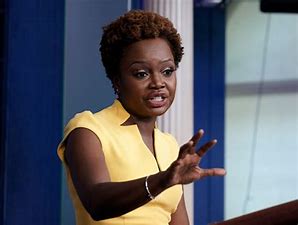 White House spokesperson Karine Jean-Pierre has had a tough couple of days. To be fair, I don’t think it’s entirely her fault. I think it’s largely because her boss, President Biden, has been such a complete hypocrite on the border issue that there’s just no way to come out these briefings looking good anymore.

As Ed pointed out yesterday, the Biden administration has decided it will complete several sections of the border wall near Yuma, Arizona. That decision is completely at odds with what Biden said when he was running for office against Trump’s border wall.

2020 – Not another foot of the border wall will be constructed. End all land confiscation including pending cases.

And that brings us back to Karine Jean-Pierre who was asked by Fox’s Peter Doocy Friday why President Biden has decided to complete even a portion of the wall, contrary to his vows not to do so. Here’s the clip:

.@pdoocy destroys the Biden Admin’s hypocrisy for building a border wall in AZ.

KJP: We’re not finishing the wall. We’re fixing the mess of the previous Admin

Doocy: So by filling in the wall, is this racist? You said it was when Trump did it. pic.twitter.com/FWXoZuA63p

Her answer is truly awful and so I want to give you a bit of the transcript and walk through this so you can fully appreciate how many land mines Joe Biden has set up for her: [emphasis added]

Peter Doocy: Why is the Biden administration building a border wall in Arizona?

As for her filibuster about giving the money back to the military, it’s true the Trump admin was sued over this money and several judges ruled against him. However in July 2020 the Supreme Court ruled in his favor.

The Supreme Court has allowed President Trump to defy Congress and continue to spend more than $6 billion diverted from military funds to pay for the construction of a border wall in parts of Arizona, New Mexico, Texas and California.

By 5-4 vote, the justices on Friday rebuffed lawyers for the Sierra Club and House Democrats who sued to challenge Trump’s diversion of funds as illegal and unconstitutional.

By finishing part of the wall the White House is admitting that there was a need to complete more of the job before shutting down the entire project. So, if there was a failure here it was at least partly a failure of the Biden administration not following through on this 18 months ago.

Doocy: But President Biden when he was a candidate that there will not be another foot of wall constructed in my administration. So what changed?

Now this is getting really bad. If Biden had said ‘We’ll never finish the wall’ that would be a plausible answer, but as you can see from the video clip above, what he said was “There will not be another foot of wall constructed in my administration.” KJP is trying to dance around that but clearly Biden is breaking a promise that came out of his own mouth.

Doocy: If walls work in that part of Arizona, is this the administration trying to get migrants to cross somewhere else, like in Texas? What is the plan?

Doocy is being generous. He could have said, “If walls work in Arizona, don’t they work everywhere?” Instead he’s starting from the idea that the administration has some specific goal in completing this one portion of the wall. He just wants to know what the plan is.

You may notice that KJP has repeated this talking point 3 times already. You may also notice it’s non-responsive to the actual question. She does give a hint what this is about when she says they are trying to save lives. This area of Yuma is the top area to cross the border in Arizona because the river is shallow and people can walk across. However, it’s still dangerous and last month a child was killed trying to cross:

According to Yuma Sector Border Patrol, a 5-year-old migrant drowned in the Colorado River on Monday, June 6th attempting to cross into the United States.

In a statement to KYMA, CBP said when the mother was in custody, she told agents she had been separated from her child.

“The mother stated that she had handed her child to an unknown individual in the group and was last seen in the vicinity of the Morelos Dam near Andrade, CA,” the statement reads. “Agents immediately responded to the area to search for the missing child and ultimately discovered a child in the Colorado River.”

So if the idea is to complete a section of the wall to discourage crossing at this point, which is dangerous, then you’re admitting a couple of things. First, that the wall is a deterrent. Second, that migrants crossing the border is dangerous. KJP isn’t really saying either of those things outright. She won’t say the first because that’s dangerously close to admitting walls work. She won’t say the second because that would call attention to a) the record number of migrants crossing the border under Biden and b) the record number of dead migrants found along the border this year. Again, it sounds like KJP is failing here but she’s failing because of the sheer number of land mines Joe Biden has set up with his own feckless response to this crisis.

Doocy: By finishing the wall, is this…?

Doocy: By filling in, finishing…

Make that 5 times in less than 90 seconds.

Doocy: By filling in, is this racist? Because in 2019 when the former guy was proposing a wall, he said that it was his racist wall. So how is this any different? I’m just having a hard time understanding how this is any different.

KJP: I’m not even sure how you get to your first question to this question that you just asked me. I will say this…[crosstalk] I’m answering your question. A border wall is ineffective use of taxpayer dollars. So it’s ineffective of taxpayer dollars, dollars that actually went to the military that the last administration the prior president took from the military, which took away from schools, which took away from military bases. That’s what that money that he pulled away from to build this wall that he wanted that is ineffective by the way, which I just said. Just recently CBP reported that new bollard fencing along the southwest border was breached 3,272 times between fiscal year of 2019 and 2021 requiring $2.6 billion in repairs. It’s ineffective. We are not finishing a wall. We are cleaning up the mess that the last administration made.

If the wall is ineffective, why build more of it?

If the wall is ineffective, why do they think it can save lives near Yuma? KJP can’t square the circle and doesn’t even try. She knows Fox News is the only media outlet that will care.

And of course she didn’t come close to addressing the main question which was “Is building more of this wall racist?” She seemed shocked by that question but progressives in her party have explicitly said the wall was racist. Here’s what Rep. Omar said last year in reaction to rumors that Biden might build more of it.

It’s shameful and unacceptable for @POTUS to continue the construction of Trump’s xenophobic and racist wall.

So KJP can’t give the correct answer here (which is ‘NO’) because that would make Rep. Omar and the rest of the squad mad. Again, her answers were awful but they were awful not because she’s clueless but because there are so many obvious things she just can’t say.

The truth is that if the wall didn’t work Biden could tear it down. But he’s not doing that. Instead he’s adding to it.