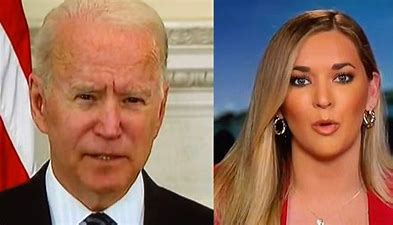 A couple of days ago Joe Biden shocked the country when he went off another bizarre tangent — only this tangent differed from the usual train wrecks we’ve all become accustomed to…This time Joe randomly started talking about how everybody knows somebody with naked friend pics who gets blackmailed or something like that.

Here’s what Joe actually said: “I bet everybody knows somebody…that in an intimate relationship, what happened was the guy takes a revealing picture of his naked friend, or whatever, in a compromising position and then blackmails…”

What a weird and inappropriate thing for a so-called “president” to say, right?

It was strange and raised many eyebrows…

And conservative writer Katie Pavlich thinks she knows why Joe said what he did.

Here’s what Katie said: “He’s accidentally talking about Hunter Biden and his laptop.”

That very well could be, because the day Joe Biden said this, was the day before the New York Times story dropped that admitted Hunter Biden’s laptop was “real.”

He’s accidentally talking about Hunter Biden and his laptop. https://t.co/snG2fTafaa

And as most of you know, there were a lot of very naked pictures of Hunter and random (young) women.

That had led many to believe that Joe Biden was very compromised and likely being blackmailed.

“Yes Joe, there are 100’s of pictures of your Son Hunter( SMARTEST GUY IN THE WORLD)NO BLACKMAIL. HIS OWN LAPTOP THAT HE WAS TOO STONED TO REMEMBER TO PICK UP.”

“At this point, anyone who doesn’t think Joe Biden is being blackmailed is an idiot”

“The cat is out and now they gotta catch it”

“And this is why Hunter and this laptop thing make Joe Biden a national security risk. Ripe for blackmail”

Very interesting that those were the words he picked to say the day before his son’s laptop was “confirmed.”