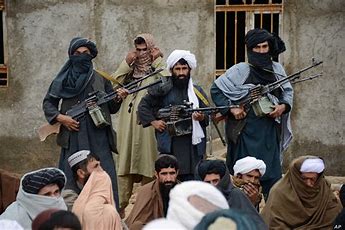 The Taliban ordered women to cover their faces in public on Saturday. Women were also told to remain inside their homes. The Taliban is bringing back the bad old days for women and girls despite the assurances from Team Biden that this would not happen.

Women were ordered to cover up from head to toe which brings back the old days of burqas. Most women in Afghanistan wear head scarves but an order to cover their face is an escalation. The attire of women in Afghanistan has now been set back over twenty years, pre-war. 51% of the population of Afghanistan is age 19 or younger. That means that for at least half of the country’s citizens, there is no recollection of women in full burqas. Young women born twenty years ago didn’t grow up with strict clothing demands from Afghan leadership. They grew up embracing Western habits.

Last month the Taliban forbade women to travel alone. That order was protested and now is silently ignored. The wearing of the burqa is being protested, too, but it will be a harder battle to win. Only a woman’s eyes can be exposed in public. The Taliban justify the extreme measure as women living “with dignity and safety.” “We want our sisters to live with dignity and safety,” said Khalid Hanafi, acting minister for the Taliban’s vice and virtue ministry.

The belief coming from the Biden administration that the new Taliban leaders would be more Western in their thinking and more open to women’s rights was quickly extinguished by reality. The Biden administration – especially the State Department – has been unbelievably naive in its dealings with these animals. The Taliban put on a ruse in the early days after Biden’s disastrous withdrawal from Afghanistan that was intended to reassure Team Biden and Americans in general that things would be different this time around. However, since the Taliban was able to so easily take over the country because of Biden’s lack of planning and refusal to listen to intelligence on the ground, the Taliban was emboldened early on. They have no intention of listening to any protests from the Biden administration. Why should they? Biden proved he is a weak and wishy-washing commander-in-chief. The Taliban doesn’t believe threats coming from Team Biden now, if there are any.

The Taliban previously decided against reopening schools to girls above grade 6, reneging on an earlier promise and opting to appease their hard-line base at the expense of further alienating the international community. But this decree does not have widespread support among a leadership that’s divided between pragmatists and the hardliners.

That decision disrupted efforts by the Taliban to win recognition from potential international donors at a time when the country is mired in a worsening humanitarian crisis.

“For all dignified Afghan women wearing Hijab is necessary and the best Hijab is chadori (the head-to-toe burqa) which is part of our tradition and is respectful,” said Shir Mohammad, an official from the vice and virtue ministry in a statement.

“Those women who are not too old or young must cover their face, except the eyes,” he said.

The decree added that if women had no important work outside it is better for them to stay at home. “Islamic principles and Islamic ideology are more important to us than anything else,” Hanafi said.

Denial of an education past grade 6 is happening mostly in rural areas of the country. In Kabul, the capitol, private schools and universities are open and operating.

The Biden State Department is as incompetent and feckless as Biden is himself. However, spokesperson Ned Price points to tools in the State Department’s toolbox to use when it comes to pressuring the Taliban to support women and girls. He didn’t mention how the pressure would be applied or what Biden’s plan is to accomplish any plan they may have.

“We’ve addressed it directly with the Taliban,” State Department spokesperson Ned Price said in a briefing on Monday. “We have a number of tools that, if we feel these won’t be reversed, these won’t be undone, that we are prepared to move forward with.”

“We’ve consulted closely with our allies and partners,” Price said. “There are steps that we will continue to take to increase pressure on the Taliban to reverse some of these decisions, to make good on the promises that they have made.”

A key piece of leverage held by Washington over the group is the $7 billion in frozen Afghan central bank assets on U.S. soil – half of which the Biden administration is seeking to free up to help the Afghan people, the administration has said.

The United States and other countries have already cut development aid and sanctioned the banking system since the group took over, pushing Afghanistan toward economic ruin.

U.S. Special Representative for Afghanistan Tom West expressed “deep concern” over the Saturday decision in a series of tweets, while the U.S. Ambassador to the United Nations Linda Thomas-Greenfield said it was an “unconscionable” move.

Threats of withholding funds and expressing “deep concern” over “unconscionable” moves haven’t done a thing to help Afghan women and girls. Afghan women are fighting back against wearing burqas, though. A group of about a dozen women marched through the streets in Kabul today. Taliban operatives have threatened women with violence for protesting.

Failure to comply will result in a woman’s father or closest male relative being reprimanded, imprisoned, or fired from employment.

“We were faced with harsh behavior by the Taliban. It was terrifying…They even told us if we move one step forward, they will fire 30 rounds at us,” one women said in a video made by the group, called Afghanistan’s Powerful Women’s Movement.

The Biden administration continues to naively say that the Taliban will abide by international pressure yet there is no evidence of that. The Taliban doesn’t care if the international community recognizes its authority. They are in control of Afghanistan and Joe Biden handed the country to them without hesitation. Thirteen American service members lost their lives due to the chaotic exit from Kabul. The Taliban is doing what any person paying attention would expect – returning to the draconian days of its rule. Women’s rights in Afghanistan is a thing of the past. It’s back to full burqas, home isolation, and very limited education.