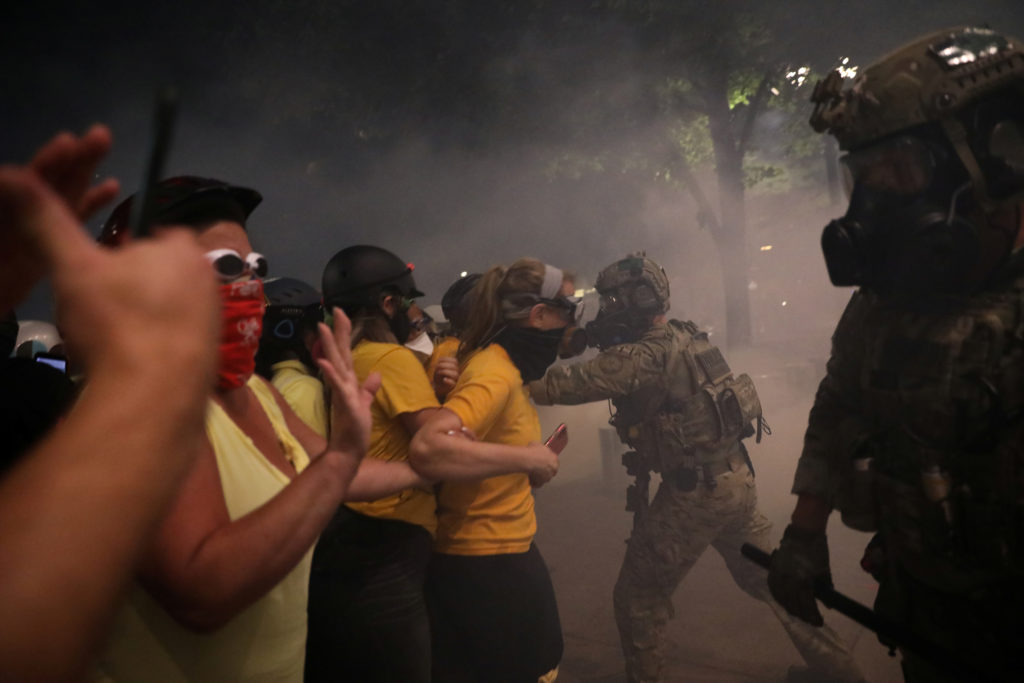 SALEM, Ore. (AP) — A lawyer who formed part of a “Wall of Moms” confronting militarized U.S. agents is suing federal authorities, claiming excessive force was used against her and she was arrested without probable cause.

In the lawsuit filed in federal court in Portland, Oregon, Jennifer Kristiansen also accused an unnamed federal agent of groping her breast and buttocks as he trapped her against a wall, leading her to fear she would be raped.

Named as defendants are Gabriel Russell, regional director of the Department of Homeland Security’s Federal Protective Service, supervisors and 29 ground-level agents who are not named because they wore no name tags.

Spokespersons for the DHS did not immediately respond to a request for comment on the lawsuit, filed Monday. The department has in the past declined to comment on pending court cases.

The lawsuit details how, for one woman seeking to protect Black Lives Matter protesters from militarized agents, one night turned into a traumatic experience.

On July 20, Kristiansen joined over 100 Wall of Moms protesters and walked to the federal courthouse in downtown Portland. It was the third night of Wall of Moms protests, in which women wearing yellow T-shirts and clothing stood in line, arms locked, to support Black Lives Matter protesters who were facing off against federal agents deployed by the Trump administration.

Outside the courthouse, federal officers sent large amounts of red chemical agents and flash bangs into the crowd, then pushed them back with billy clubs. One agent accused Kristiansen, who is 5-feet tall and weighs 100 pounds, of hitting him, the lawsuit says. Kristiansen says she has never struck a law enforcement officer. She was taken away by agents.

“After ascending the courthouse steps but prior to entering its doors, Defendant John Doe 63 violated Ms. Kristiansen by forcing her face first against the courthouse wall. Ms. Kristiansen was placed in fear for her safety and believed she would be raped when Defendant John Doe 63 molested her while blocking her vision and trapping her against the wall, using his left hand to grab her breast and his right hand to reach up her skirt and grab her buttocks,” the lawsuit says.

Kristiansen was taken into the courthouse, searched, interrogated and denied water, food and a blanket while being held overnight and most of the following day in a cell. She was charged with assaulting a federal agent and failing to obey a lawful order.

After a review of video evidence showing that Kristiansen had neither assaulted nor even approached an officer, a federal judge granted a federal prosecutor’s motion to dismiss the charges.

John Hacker, an activist who videotaped protests in Portland, is also a plaintiff in the lawsuit.

In the predawn hours of July 29, after a protest had largely dispersed, some 15 agents dressed in dark blue or camouflage uniforms jumped out of vehicles that approached Hacker on the street, the lawsuit says. They are accused of taking him to the courthouse and refusing to answer his questions about why he was being arrested.

He sat alone in a cell for 45 minutes until an agent entered and took a DNA swab from Hacker’s mouth. At about 5 a.m., Hacker was shackled and taken to the courthouse garage. The lawsuit says his belongings, minus his cellphone, were returned to him in a garbage bag. The federal agents informed him he was not being charged, removed his shackles and told him to leave.

The lawsuit seeks unspecified punitive damages. It is the latest to be filed in the wake of protests against racial injustice and police brutality that erupted in Portland after the death of George Floyd in Minneapolis in May.

This is why we need filibuster to stay