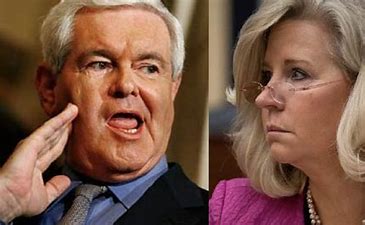 Former House Speaker Newt Gingrich isn’t afraid of RINOs and he’s going after them…Namely, Liz Cheney, and she actually thinks she can take him on.

Newt says there’s a day of reckoning coming for the January 6 Committee, or as Newt calls it, the “witch hunt.”

Newt says the entire scope of the witch hunt will dramatically shift if the 2022 political bloodbath happens the way most people expect it to.

He likens it to the wolves becoming the sheep.

But Newt thinks it will go beyond even that. He told Maria Bartiromo that he believes the J6 crew could actually face jail time.

I dunno about that – the GOP would have to have balls of steel for that to happen, and I just don’t see it.

But Newt thinks it could happen…

According to Newt, “You’re going to have a Republican majority in the House and a Republican majority in the Senate and all these people who’ve been so tough and so mean and so nasty are going to be delivered subpoenas for every document, every conversation, every tweet, every email, because I think it’s clear these are people who are literally just running over the law, pursuing innocent people, causing them to spend thousands and thousands of dollars in legal fees for no justification and its basically a lynch mob and unfortunately the attorney general of the United States has joined that lynch mob and is totally misusing the FBI,”

“And I think when you have a Republican Congress, this is all going to come crashing down,” he added. “And the wolves are going to find out that they’re now sheep and they’re the ones who are in fact, I think, face a real risk of jail for the kinds of laws they’re breaking.”

And now Liz, the RINO of the century, is lashing out at Newt.

Boy, she really is clueless.

Liz saw the video clip of Newt on Fox, and she went after him in a tweet:  “A former Speaker of the House is threatening jail time for members of Congress who are investigating the violent January 6 attack on our Capitol and our Constitution. This is what it looks like when the rule of law unravels.”

A former Speaker of the House is threatening jail time for members of Congress who are investigating the violent January 6 attack on our Capitol and our Constitution.

This is what it looks like when the rule of law unravels. https://t.co/vpQZjTg9em

The irony of Liz Cheney talking about the “rule of law” is off the charts.

This woman comes from a globalist family that has broken every rule in the book to amass power and wealth.

And if she wants to take on the likes of Newt, she better get ready – he’s one of the best debaters in the business.

Liz will see what real “unraveling” really is when she’s sent packing in the 2022 primary… and I can’t wait for that day.