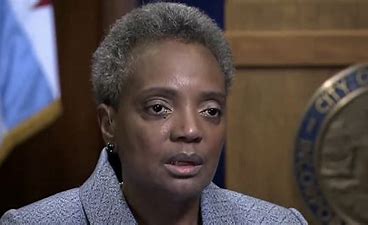 Chicago is an amazing city. It’s clean, beautiful, and has that “Midwest” friendly feel cities like New York are sorely lacking.

The crime is out of control, but that’s par for the course with liberal-run cities.

But it’s a shame that such a dark, mean woman runs a city that is so vibrant and stunning.

However, that might be changing… because it looks like Lori Lightfoot is in some political trouble and she could very realistically be facing an ousting.

Chicago Tribune reported that as Mayor Lori Lightfoot gears up for her expected reelection campaign after three tumultuous years, she finds herself in a familiar position: on the defensive.
Lightfoot the rookie politician won in 2019 in part because of her credentials as an outsider, but Lightfoot the incumbent does not have that advantage. And in just the past eight days — still more than 10 months before the municipal Election Day — two candidates have announced plans to run for mayor with expectations several more will join the field.

During her three-plus years in office, Lightfoot has faced spikes in crime, hasn’t run as transparent an administration as promised, and engaged in constant fights with unions representing Chicago teachers and police — all while struggling to forge good relationships with politicians or leaders in the city’s business community.

“I have never met anybody who has managed to piss off every single person they come in contact with — police, fire, teachers, aldermen, businesses, manufacturing,” Ald. Susan Sadlowski Garza, 10th, a onetime close Lightfoot ally said recently in explaining why she wouldn’t endorse the mayor for reelection. “I said it. That’s it. I don’t care.”

The situation is rare for an incumbent mayor. Richard M. Daley — the longest-serving mayor in city history — had his problems but rarely had tough competition come election time. His successor, Rahm Emanuel, faced steeper challenges than Daley but overcame them with massive fundraising.
“She has the position, she doesn’t have the power,” said veteran Chicago political strategist Delmarie Cobb, who isn’t currently advising any mayoral campaigns. “You may be the mayor but you don’t have the power that a Daley had or a Rahm Emanuel had and that’s because they came in with that kind of power. They didn’t have to gain it, they actually had it when they walked in the door. She needed to achieve it and create the illusion of inevitability or being invulnerable.”

The bottom line is this — she’s an incumbent, so she has that going for her, and she’s had some success bringing business into the city.

But things are very dicey for Lori… her citizens aren’t very fond of her. She polls poorly, and right now whites and Hispanics have pretty much thrown in the towel on her.

So, if she wants to win re-election, she’ll need to reconnect with those two groups, and if she can’t, she’s a goner.

And it might be hard for Lori to do that, especially in this volatile political climate… the winds of change are blowing very hard.

The Worst Is Yet to Come in Afghanistan