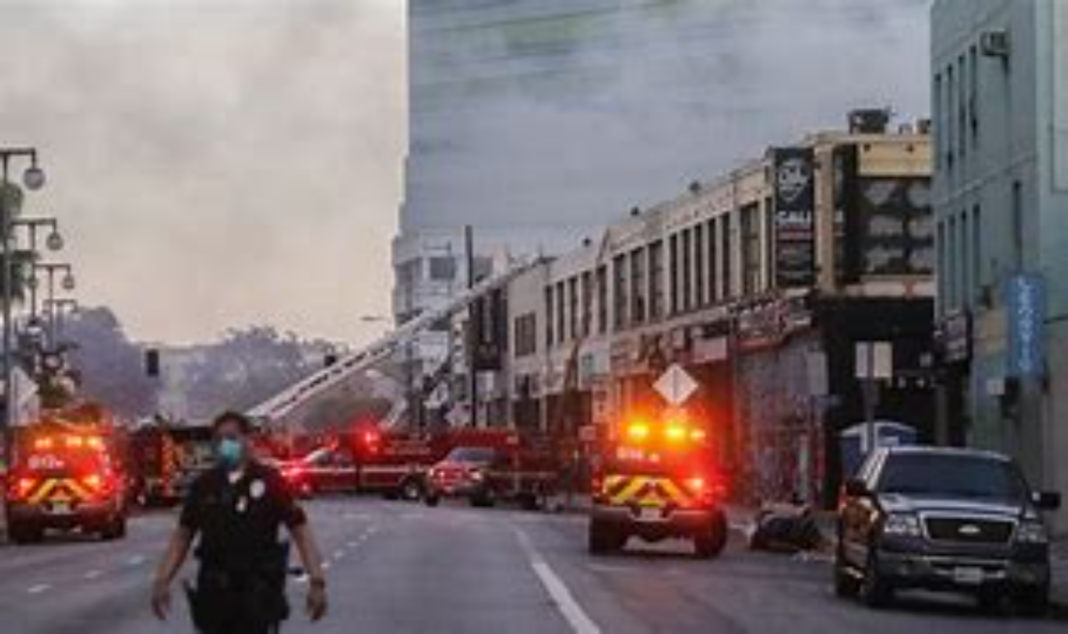 Soon after the explosion, Arturo Cejas, 27, a resident of the home where police found the fireworks, was arrested on charges of possessing a destructive device. His bail is set to $500,000.

Ten of the injured are LAPD officers, one is an ATF officer and six are civilians.

“Our Bomb Squad officers were in the process of seizing over 5,000 pounds of illegal fireworks in the area of 27th Street and San Pedro. Some of the fireworks were being stored in our Bomb Squad trailer as a precautionary measure,” the LAPD wrote on Twitter Wednesday evening.

In a late-night press conference, LAPD Chief Michel Moore and LAFD Chief Ralph Terrazas said they moved to confiscate the illegal commercial-grade fireworks from Cejas’ home and worked all day to clear them and move them to an offsite location.

They then came across approximately 40 Coca-Cola can-sized improvised explosive devices with fuses and 200 additional smaller devices with similar construction.

That material was transferred into a multi-ton containment vehicle with an iron chamber inside that is designed to house explosive material that can be safely detonated.

At approximately 7:37 p.m. local time, those items were detonated — that’s when the containment vehicle had a catastrophic failure.

The explosion damaged cars and surrounding buildings and left debris scattered on the streets.

Alyssa Casillas, an Instagram user who took a video of the explosion, told Storyful that police said to the crowd the fireworks “were going to be contained in the truck when set off.”

“The police also told us it would be a small boom and nothing big,” the user said. “As we waited to hear the small boom, the whole truck blew up.”

Moore said they knocked on every door near the area and people self-evacuated.

The LAFD said several homes were impacted and LA Building and Safety is evaluating them to determine their status and see if anyone will be displaced.

Moore said during the press conference that Cejas acquired the fireworks out of state with the purpose of reselling them to community members for use during July 4th. Child endangerment charges will also be pursued since Cejas’ 10-year-old brother was residing in the house with him.

The LAPD along with the Bureau of Alcohol, Tobacco, Firearms and Explosives will investigate who supplied him with the fireworks.

Moore said that last year, the LAPD recovered more that 4 tons of illegal fireworks, which adds up to more than 8,000 pounds.