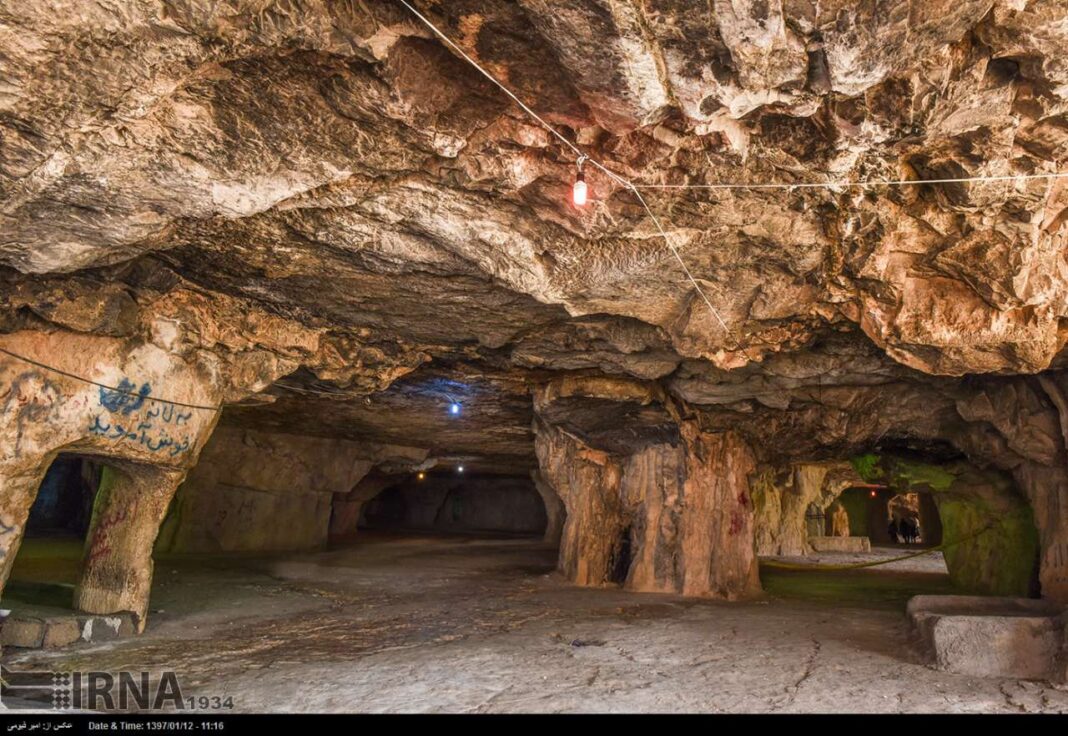 Sang Shekan cave is located in Alborz Hills in Jahrom, a city in Fars Province, and is over 150 years old. Those who used to work in this cave sought to extract rock from the cave to make a living. There are over 100 stone columns and 12 cave mouths which turn the cave into a beautiful hall.

People in Jahrom associate the man-made Sang Shekan Cave with on old story. They say that one day Khajeh Kazem, an aristocrat, was riding a horse along a river in Jahrom when he heard the thuds of a sledgehammer. When he tried to locate the sound, he came across an old man who was cutting stone.

The noble young man struck up a conversation with the old stonecutter and they had a meal together. Their friendship later saw the young man fall in love with the old man’s daughter. However, the aristocratic family of the young man disapproved of their marriage, citing the fact that a boy born into a noble family should not marry a serf’s daughter.

Eventually he convinced his family to accompany him on a visit to the old man’s house when he wanted to pop the question. The old man conditioned their marriage on the young man living with them and working with him in the mountain.

The young man who was in love took up the old man on his offer and abandoned his luxury life. Years later, the young man made a name for himself as Master Kazem. Irandeserts.ir reports that the story took place around 300 years ago.

After Master Kazem, the Sangtarashan cave was handed down to his children and grandchildren each of whom chipped away at the rock there for around 70 to 80 years.

Some of their apprentices working in the cave became its shareholders who are known as “the lesser heirs.”

White ductile limestone extracted from the cave at the time was used to decorate lintels and elegant mansions which belonged to either aristocrats or the ruling elite.

The cave measures around 350 metres in length and 150 metres in width, covering an area of approximately 4 hectares. It measures between 3 and 4 metres in height, which drops to less than a metre at the end of the cave.

Sangtarashan is the Middle East’s largest man-made cave and one of the most beautiful artificial caves in the world.

The precise calculations made to build the columns to prevent a collapse of the rock are amazing. Some of the entrances inside the cave are so large that a car can pass through them. One can see the whole town from the main entrance to the cave.

The Sangtarashan cave was registered on the list of National Heritage Sites in 2011 when work got underway to beautify the cave.

What follows are photos of the beautiful cave: