Roce Today – Politics, Opinions, Gun Rights,Pro-Life and Border Wall
Home Politics Manchin And The Democrats Are Making The IRS More Powerful Than Ever 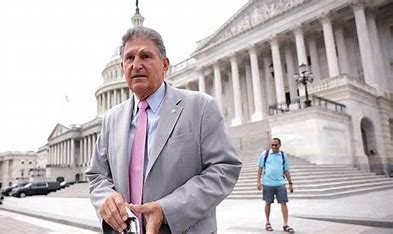 President Joe Biden and Senate Democrats have decided to react to inflation and recession with a new version of BBB that raises taxes and spending. This is how we got into this problem in the first place.

This makes no economic sense.

It does make a great deal of political sense.

Start with the spending explosion for the Internal Revenue Service that Biden demanded from the start. That is $80 billion to deploy 87,000 new IRS agents. Enough to fill every seat in Nationals Park twice. Enough to fill the Roman Colosseum 1.7 times.

The bill also gives taxpayer money to the IRS to buy new cars, and more money for IRS “office rent.”

The official IRS watchdog — the Treasury Inspector General for Tax Administration — reports that the IRS already has more cars than it needs. And that the IRS cannot show that its employees are limiting their use of those cars to official business.

And why more office space when the IRS has been forced to admit that more than half of its employees never come into an office? They should be downsizing office space.

While we are at it one wonders if the IRS will buy more guns and ammo with an extra $80 billion to play with. The Inspector General found that IRS special agents can be careless with firearms: they accidentally discharge their guns more often than intentionally fire them.

The specific property damage and personal injury was redacted. Why?

What is the IRS doing with guns? At last count the IRS had stockpiled 4,600 guns and five million rounds of ammunition.

This includes 3,282 pistols, 621 shotguns, 539 rifles, 15 fully automatic firearms and four revolvers. How many more will they buy with your tax dollars?

Another IRS watchdog report found that the IRS intentionally destroyed 30 million tax statements sent in by the American people. The IRS didn’t tell anyone about it. A drop-in inspection is the only reason they got caught.

If you stacked up 30 million documents you’d have a pile two miles high. These paper documents were either burned or thrown in a dumpster. The IRS won’t say. But they are gone. No accountability.

Imagine if you told the IRS that your tax paperwork went missing. How would that go over?

And when someone in the IRS gave or allowed to have stolen the private taxpayer files of thousands of Americans over 15 years the Biden administration promised to get to the bottom of it.

The personal tax files were given to a progressive news organization that published details of the documents in the hope they’d help Democrats impose tax increases.

But here we are 14 months later and we still have no answers from the Biden administration or the IRS.

Does it make sense to send tens of billions of additional dollars to such a dysfunctional agency?

Fun fact to know and tell: The labor union that represents IRS employees collects labor union dues from its members. The union contributes 100% of its PAC contributions to one party: the Democrat party.

Which congressmen and Senators will vote to give an agency with so much disfunction more money? Let’s look at who has received campaign contributions from the IRS union.

The IRS union also – coincidentally – gives money to Democrats in key Senate races. Examples include $10,000 for Maggie Hassan (D-N.H.) and $5,000 each for Catherine Cortez Masto (D-Nev.) and Raphael Warnock (D-Ga.)

The Manchin bill also imposes tax increases on businesses that invest heavily in new jobs and buildings and training. Companies that plow all their earnings into growing the firm, hiring more people etc. will now be hit by a 15% tax on that investment just as we enter a recession.

The target: the fastest growing, most successful companies that are putting money into their companies will be punished. Tough to invent a stupider tax.

Both Republican and Democrat congressmen and administrations have supported the investment tax credit and full expensing which would be undermined by the $300 billion plus tax hike in this tax and spend bill.

This version of BBB will slow economic growth, job creation and new investment. And it will recycle your tax dollars through the government to Democrat politicians.

The bill will also put price controls on life-saving drugs that now will NOT be invented over the next generation. The price controls come with a 95% federal excise tax on U.S. manufacturers. CBO finds that this will cause 15 fewer new drugs to come onto the market. Who knows what future cures will be prevented by this reckless policy.

One hopes that at least one Democrat Senator will deny 50 votes for a bill that taxes investment in America, subsidizes the IRS and the Democrat party, creates a government-dependent network of subsidized “energy” companies while taxing real energy and slows medical progress.

Grover Norquist is president of Americans for Tax Reform.