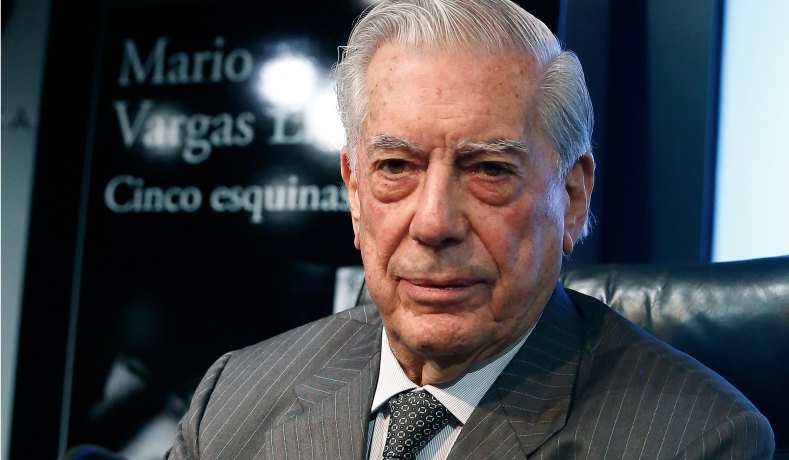 Pictured, above, is Mario Vargas Llosa, but he does not feature in my Impromptus today. I’ll get to him in a moment. My column today begins with living in the White House: What’s it like? What is a president’s responsibility, as custodian of the house?

I quote a column by Chris Matthews, published in early 2001. The new president, George W. Bush, had just invited members of the Kennedy family to the White House, for a screening of Thirteen Days, the Kevin Costner movie about the Cuban Missile Crisis. That was a very Bush thing to do: to issue that invitation.

At the end of his column, Matthews told a story. Around the time of Bill Clinton’s inauguration — the first one, in 1993 — he (Matthews) was at a dinner, seated next to a young Clinton aide. She was mocking something that the outgoing president, George H. W. Bush, had said. Asked what was the greatest thing about being president, Bush had answered, “The honor of it.” The young Clintonista thought this was a hoot.

Yes, “the honor of it.” Such a very, very old-fashioned notion. Some of us old-timers were appalled last summer when Donald Trump and the Republicans used the White House for their party convention: pretty much the most partisan event (a convention) in American political life. I think some newer-timers — among the Republicans, that is — couldn’t understand why we were so disgusted.

Or maybe it was simple tribalism. If a Democratic president and his party had done this, every Republican head — young, old, and in between — would have exploded.

Okay, MVL — Mario Vargas Llosa — that MVP. Last Sunday, he turned 85, and I jotted a tweet: “If you’ve forgotten, by chance, the power of literature, pick up a novel by MVL. I am one of those most affected by music. But when a novel or poem is good — holy smokes.”

A reader writes to ask me, “Do you have a specific recommendation for a ‘holy smokes’ novel of his?” Yes: The Feast of the Goat. It is about the Dominican Republic under Trujillo. It is the best depiction of a society under dictatorship I have ever read — and I have read a great, great many of them, most of them nonfiction.

(Have you read the memoirs of Mao’s doctor? That, too, is “holy smokes,” in its own way.)

In a column last week, I wrote about James Levine, the late conductor, and the charges against him (of sexual predation and abuse). Is it possible to separate the music-making from the charges? Do those charges color everything? I wrote of other artists and personalities too: including Roman Polanski, Woody Allen, and Michael Jackson.

I got a couple of letters, very moving, from people who had mentors in college — beloved mentors — who, suddenly, were gone: because of charges of sexual abuse (true ones). How are they to feel about those mentors now? It is vexing and infuriating.

In my column, I said — referring to some specific charges — “Do I believe them? Yes — but you have to understand: I tend to believe the worst. I have a dark, dark view of mortal man.”

In a separate item, within that column, I quoted Jeff Van Gundy, the ex–NBA coach and current commentator (stay with me, if you would). A player and his fiancée had received death threats, after the player had missed a last-second shot. The commentator Mark Jackson (also an ex–NBA coach) said, “We’re better than that, as a people.” Van Gundy said, “I’m not sure we’re better than that.”

A reader sent me an e-mail headed “Are we better than that?” I’m going to publish his letter, though a lot of people won’t like it. I’m warning you.

Several years ago, my family and I visited Auschwitz. I found the visit even more disturbing than expected. A priest friend later asked me what I had thought, and I said I was upset by the scope of the inhumanity. His response, without a moment’s hesitation, was to say, “That was not inhumanity. That was the most human place you will ever visit.”

He is right. I suppose that’s why it still upsets me.

Okay, let’s lighten up — way up — with some music. Can music, or anything else, follow Auschwitz? I don’t know, but it’s going to. The other day, I had occasion to write of the Louis Jordan hit from 1943: “Is You Is or Is You Ain’t My Baby?” A reader writes,

Many years ago, I took a road trip to the Rock and Roll Hall of Fame in Cleveland. I heard Louis Jordan in one of the videos about the early influences of rock and roll. I later found a machine there for playing your choice of music from the inductees, and his music was all I wanted to hear. I became a big fan that day. To me, finding out about musicians like him is the most important reason to have such an institution. My favorite discovery was how much the guitar solo at the start of Jordan’s “Ain’t That Just Like a Woman” sounds like the solo that starts “Johnny B. Goode” a dozen years later. Practically a life-changing revelation.

Another reader says the following, about “Is You Is or Is You Ain’t My Baby?”: “Many of us became familiar with that song through a Tom-and-Jerry cartoon” — which is here. Gosh, they were geniuses, those cartoon people.


Living in the White House, &c.

Living in the White House, &c.