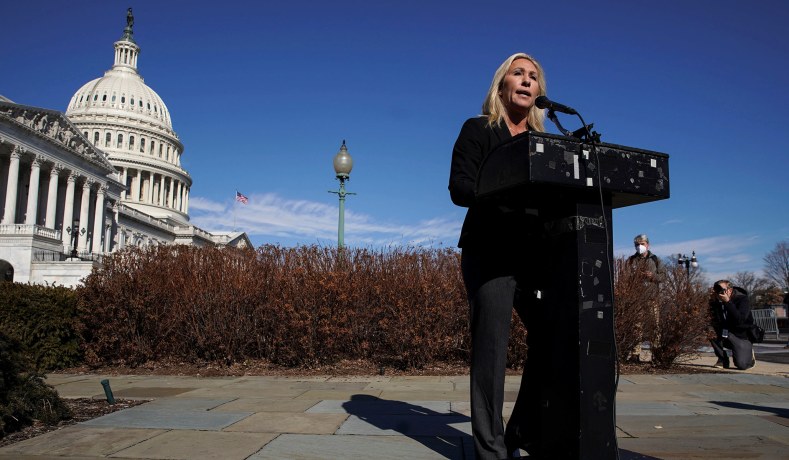 Georgia congresswoman Marjorie Taylor Greene held a press conference on Friday, the day after she was was stripped of her committee assignments by a House resolution on Thursday because of her past remarks that endorsed bigotry, wild conspiracies, and calls to violence against political opponents. One reporter on Friday asked Greene if she still “stands by” her public remark in 2019 that “it’s a crime punishable by death is what treason is. Nancy Pelosi is guilty of treason.”

“I think you heard my speech yesterday,” Greene replied before telling the CNN reporter who asked the question that her network lied about collusion between Russia and Donald Trump. “You owe the people an apology. You lied about President Trump.”

But in Greene’s ten-minute House floor speech on Thursday, she didn’t say anything about her 2019 comment that Pelosi deserves to be executed for treason.

I asked Rep Marjorie Taylor Greene specifically if she stands by her comments about violence against House Speaker Nancy Pelosi. She wouldn’t give me a direct answer. pic.twitter.com/HnOM0CxzzN

In her remarks on Thursday, Greene did express regret for promoting the QAnon conspiracy, and she seemed to blame tech companies for being misled. Greene, who had written on Facebook she believed the 2018 school-shooting in Parkland, Fla., was staged, also said she said she sympathized with David Hogg, a gun-control activist who survived the Parkland massacre. Greene, who had previously suggested an airplane never crashed into the Pentagon on 9/11, said on Thursday that 9/11 “absolutely happened.” Neither comment about 9/11 or Parkland was an outright disavowal of the conspiracy theories Greene had actually promoted.

On Friday, when asked what she was sorry for, Greene said she was “sorry for saying all those things that are wrong and offensive.”

But she has not specifically apologized for her comments about Pelosi. When Greene was asked on Friday about liking a Facebook comment saying a “bullet to the head” would be a quicker way to get rid of Pelosi, Greene indicated she had apologized for that yesterday — something she had not actually done — and then ended the press conference.

Marjorie Taylor Greene has also removed this Facebook video where she suggests Pelosi can be executed for treason.

“It’s a crime punishable by death is what treason is. Nancy Pelosi is guilty of treason,” she says. pic.twitter.com/cUVT4Bcr06