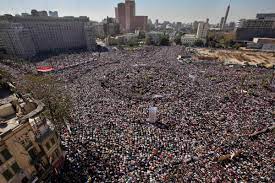 A whole decade has been passed since the Arab Spring, one of the greatest revolutionary movements in the history of the world. No one had anticipated the protest that started in a small city of Tunisia would transform into an outrageous fire ready to devour the whole Arab region.

Led by the local people, the spirit of this mass movement rested in overturning the authoritarian rule, squishing unemployment and corruption. But was it all worth it?  This is a tough debate, for there is no single rule to it. It was a success for some, and absolute failure for others, adding to their load of oppression, dejection, and disparity

Protests in Yemen, Libya, Egypt, and Tunisia proved rewarding as governments in these areas stepped down taking the pressure from the nationwide protests and progressions.However, the other campaigning areas could not bring about the change they yearned for.  Instead, the conditions deteriorated for the public in these regions, resulting in increased oppression and compromised freedom.

Only Tunisia triumphed in achieving stable democratic progress. Other countries enforced increased restrictions on cyber use, depressing the freedom of speech, and expression against the leadership.

Unemployment and corruption also soared. Living conditions worsened, marking an overall decline in the stability of the area.  The peaceful uprising in Syria transformed into a fully-fledged civil war, that killed more than 380, 000 and displaced thousands.

The aftermaths of the great uprising still persist in the form of the civil war encompassing Syria, Libya, and Yemen. The question is, is there any near end to this chaos, or the mass massacre will c0ntinue?

What are your thoughts on the story? Let’s know in the comments below.