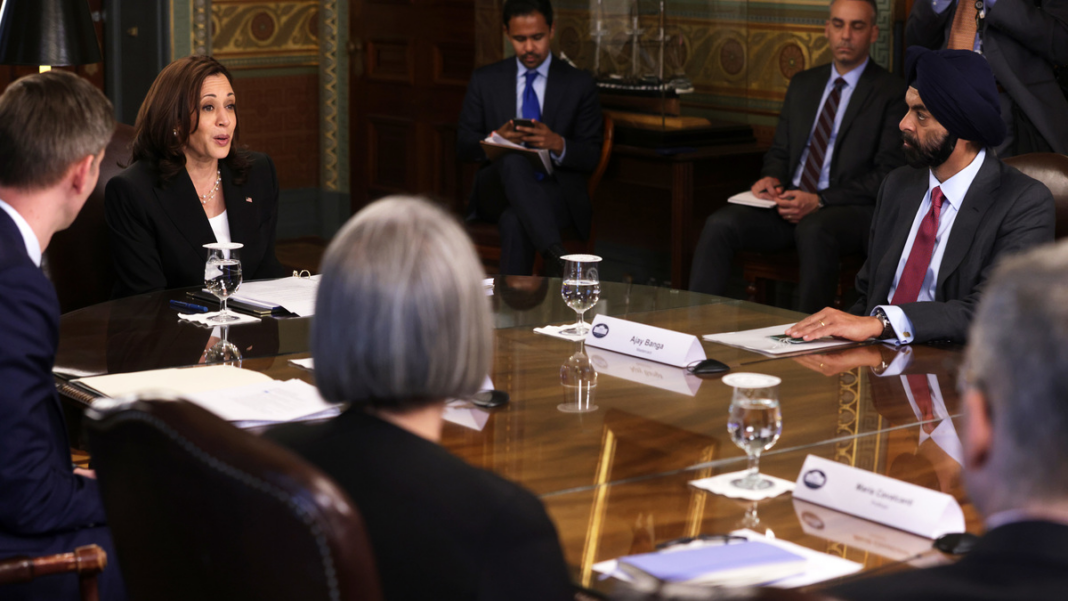 Vice President Harris has announced a new initiative to bring business and economic investment to Central America’s Northern Triangle countries that are driving much of the migrant surge at the U.S. southern border that she’s been tasked with addressing.

At the White House on Thursday, Harris — who’s set to travel next month to Mexico and Guatemala — met in person and virtually with representatives from a dozen companies and nongovernmental organizations. Participants included the CEOs of Nespresso, Chobani and Duolingo as well as the chairman of Mastercard and the president of Microsoft.

Harris said the Biden administration is issuing a “call to action” to companies, banks and social enterprises to invest in Guatemala, Honduras and El Salvador.

The initiative is part of an effort to address the root causes of migration. And focusing on businesses reflects a desire to make the economic development last beyond any one administration or congressional funding cycle.

“When we work together, when we combine resources — limited though they are for each one of us — we can maximize the potential to give people in that region hope, and in that way also show what it means to be a good neighbor,” Harris said in brief opening remarks at the event.

In its early months in office, the Biden administration has been criticized for its handling of the jump in the number of migrants seeking asylum or crossing illegally into the United States. Apprehensions along the southern border are setting records, and Republicans have blamed the surge on the administration’s decision to distance itself from the tough border enforcement policies of the Trump administration.

In March, President Biden asked Harris to lead the administration’s efforts to address the root causes of the migration. Her portfolio doesn’t include the border itself, but instead features relations with the Northern Triangle countries. This is a role Biden had during the Obama administration.

Last month Harris announced the U.S. would be investing an additional $310 million to help meet the humanitarian needs of people in El Salvador, Guatemala and Honduras. The region has been hit hard by the COVID-19 pandemic and its economic fallout as well as natural disasters, and a big chunk of the funds is set to go to emergency food assistance.

The 12 organizations that were part of Thursday’s event in Harris’ ceremonial office announced “commitments to support inclusive development in the Northern Triangle,” an administration official said. The goal is “long-term development of the region, including efforts for economic opportunity, strengthening governance, combating corruption and improving security,” the official said.

Harris said she’s operating on the premise that people don’t want to leave their home countries, and when they do it is because they are fleeing some harm, such as violence or a natural disaster, or because staying home prevents them from satisfying basic needs.

For many migrants a lack of economic opportunity in their home countries is a factor in their decision to leave. And that’s where this initiative comes in.

“We have the capacity to give people hope — and hope in particular in this case that if they stay, help is on the way,” Harris said.

Among the commitments, Harris announced that Microsoft will expand broadband access for up to 3 million people in the next year, Nespresso will expand coffee sourcing in Guatemala and start doing so in El Salvador and Honduras, and Mastercard plans to support 1 million small businesses in the region.

“The benefit of this effort will probably not evidence itself overnight, but will be well worth it,” Harris said. “We do understand our work is in the context of long-standing and deep-rooted factors.”

The press was escorted out after Harris’ opening remarks.

Pfizer and BioNTech seek COVID vaccine booster for everyone