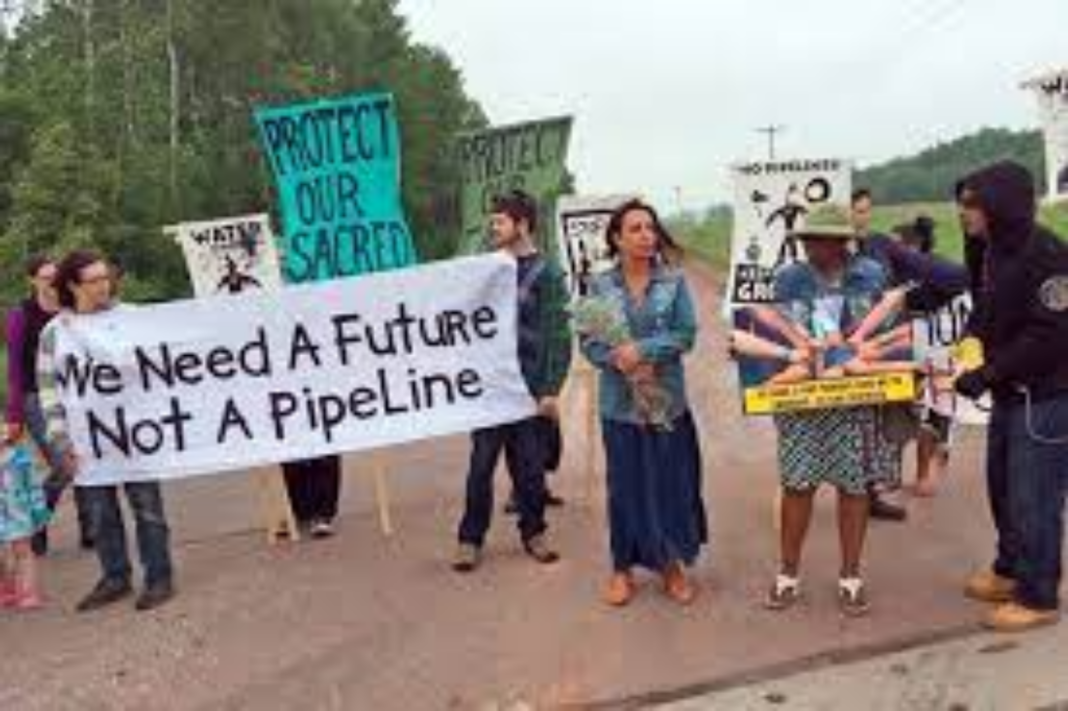 Last November the Army Corps of Engineers granted final approval to the Line 3 pipeline which stretches from Canada across Minnesota and terminates at Lake Superior.

The new Line 3 is intended to replace an existing pipeline that was constructed back in 1968. The Minnesota portion of the pipeline has been opposed for years by a coalition of environmental groups and Native Americans who have reservations in the state.  Now that final construction of the pipeline is underway, members of those groups have decided to show up in remote areas of Minnesota and simply block construction, similar to the efforts to block construction of the Dakota Access Pipeline. This included people chaining themselves to heavy equipment:

People chained themselves to equipment and occupied a pump station in Minnesota as part of protests against the Enbridge Line 3 oil pipeline being built from Canada to the U.S.

There were also protests and banners:

Thank you to everyone who came to stand in solidarity at the #TreatyPeopleGathering.

We are continuing our ceremony that started this morning. We are continuing to exercise our treaty rights on the banks of the Mississippi headwaters in the path of construction. pic.twitter.com/Umjbws5tpS

Jane Fonda was there doing her best to get the attention of Joe Biden:

Thousands have traveled to rural northern Minnesota to stand with the Anishinaabe in their homelands to demand @JoeBiden #HonortheTreaties and #StopLine3 including @Janefonda.

Consultation is not consent.

There are literally hours of video of these protests which, after all, are attempting to bring more progressives into the fight. Here’s a brief clip from a local news report:

Eventually, police moved in and made arrests:

Police are continuing to make arrests on the dozens of water protectors still inside the area of the Two Inlets pumping station. Many are locked-down to equipment and each other. https://t.co/zOkZahWgpY

Eventually all the protesters were cut loose and arrested.

Two more are led away handcuffed as dozens of police loaf around nearby – later to be paid via the Enbridge escrow account pic.twitter.com/YSyX1SAuTH

So is all of this slowing down the construction? Not really according to the Washington Post:

So far, the activism has done little to impede the $4 billion project, which is a replacement of a decades-old pipeline, although portions of it travel a new route. About 60 percent of the 350-mile Minnesota portion of the new Line 3 has been built and some 4,000 construction workers — and growing — are at work on five different areas of the project, according to Enbridge officials.

The ongoing protests haven’t “had a significant impact on construction,” said Paul Eberth, Enbridge’s director of tribal engagement in the United States. “Obviously it’s stressful when people are out protesting or if they’re doing damage to equipment or being disrespectful for the workforce.”

“Construction largely has proceeded as planned,” he said.

Construction is still scheduled to be completed by the end of the year. What the protesters clearly are hoping for at this point is some last minute political intervention. The leader of the protests is a former Bernie Sanders adviser:

It has been a long journey to reach this point for [Tara] Houska, 37, a former adviser to Sen. Bernie Sanders (I-Vt.) who is Ojibwe from Couchiching First Nation. She has been fighting Line 3 for seven years, including the past three living in a tent — even in winter — along the pipeline route. She and others in the group she founded, called the Giniw Collective, have been on the front lines of the effort to stop construction on the pipeline. Young protesters have crawled into the pipeline tube, squatted in trees and lashed themselves to machinery to try to impede the work. They have often paid a price, whether enduring freezing temperatures in winter; or being pursued by authorities.

“The majority of arrests have been from our camp,” she said.

The NY Times reports the protesters also have reason to hope they’ll receive help from the Biden administration:

Tribal leaders are hoping that Interior Secretary Deb Haaland, who made history as the first Native American Cabinet member, will also be influential in Mr. Biden’s decision on the Enbridge pipeline.

Ms. Haaland’s public views on oil pipelines are well known: In 2016, Ms. Haaland joined the Standing Rock Sioux protesters in North Dakota who camped out for months in opposition to the Dakota Access oil pipeline.

A spokeswoman for the Interior Department declined to comment on the role that Ms. Haaland might play in determining the fate of Line 3.

So with only a few months of construction remaining, the goal seems to be to generate as much attention as possible and hope for the best. And frankly it could work in this administration. Keep an eye on Minnesota for the next few months.