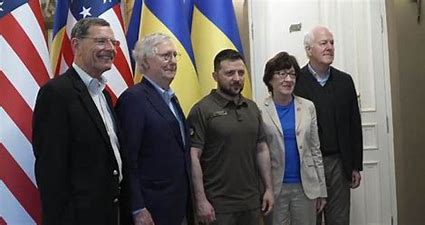 Senator Mitch McConnell made a surprise visit to Ukraine today along with three other GOP Senators.

Zelensky said on his Instagram account that the visit “is a strong signal of bipartisan support for Ukraine from the United States Congress and the American people.”

He added: “Thank you for your leadership in helping us in our struggle not only for our country, but also for democratic values and freedoms. We really appreciate it.”

None of the details of this trip have been released by the Senators themselves so it’s not even completely clear when they arrived. Video of them being greeted by President Zelensky was posted by Zelensky himself on Instagram.

On one hand these trips are primarily symbolic, a show of support for an ally. House Speaker Pelosi visited Ukraine last month and First Lady Jill Biden visited last weekend.

On this Mother’s Day, my heart is with you, First Lady Olena Zelenska, and all of the brave and resilient mothers of Ukraine. pic.twitter.com/tCMXCXhgiY

But in this case there is a more direct connection to support for Ukraine. The Senate is currently in the process of approving another $40 billion worth of aid. There was an attempt to fast-track that aid earlier this week but it was blocked by Sen. Rand Paul.

The Senate needed unanimous consent to waive procedural hurdles and approve the humanitarian and military aid package, which the House passed 368-to-57 on Tuesday. Mr. Paul, a Republican and a libertarian who generally opposes U.S. spending on foreign aid, objected, halting what had been an extraordinary effort to rapidly shepherd the largest foreign aid package through Congress in at least two decades.

Mr. Paul had sought to alter the bill to include a provision requiring that an inspector general monitor the spending, and was not satisfied with a counteroffer from party leaders to have a separate vote on that proposal. In his objection on the Senate floor, Mr. Paul cited concerns about inflation and rising energy and gas prices.

Despite the delay the aid bill is expected to be passed this coming week. Sen. Paul isn’t the only Republican who opposes the aid. Rep. Dan Crenshaw and Rep. Marjorie Taylor Greene got into an argument about it this week on Twitter. It started when Crenshaw explained why he supported the aid.

Yeah, because investing in the destruction of our adversary’s military, without losing a single American troop, strikes me as a good idea. You should feel the same.

Rep. Greene accused Crenshaw of not caring about Ukrainian lives.

So you think we are funding a proxy war with Russia?

You speak as if Ukrainian lives should be thrown away, as if they have no value.

Just used and thrown away.

For your proxy war?

How does that help Americans?
How does any of this help? https://t.co/dButTWOqAZ

I’m with Rep. Crenshaw on this one. Rep. Greene’s opposition, at least as she’s expressed it here, doesn’t make much sense. We didn’t start a proxy war with Russia, they started a war with Ukraine and we’re responding by supplying Ukraine with weapons to defend themselves. The idea that our support shows a lack of respect for Ukrainian lives is bass ackwards. The Ukrainians are begging for our support and that of other western nations. Failing to give them that support would condemn many of them to death and suffering at the hands of Russian aggressors and would not show any respect for the value of their lives or their desire to live as an independent state.

As Crenshaw suggested, Russia is one of our most persistent geopolitical adversaries, is an authoritarian state and has justified invasions into neighboring territory twice in a decade. Making our adversary pay a heavy price for its second war of choice is a good message to send to Russia and a good object lesson for China which is playing this same game in the South China Sea. Because of Putin’s decision to invade, Russia’s economy is now failing, its military is being humiliated and more countries are signing up to join NATO. All of that is good news for America.

Granted any opposition to Russia in the form of supplying heavy weapons the Ukrainians asked us for, is a risk. But it’s not as if doing nothing is risk free. Russia is already threatening Finland and Sweden for deciding to join NATO, as if they have some control over what Finland and Sweden do. So what is the alternative here? Allow Ukraine to fall? Sign some kind of agreement with Russia that this will definitely be the last neighbor they invade? Does anyone think that would work?

Non-action by the US in response to the invasion of Ukraine would invite further aggression from Russia as well as an invasion of Taiwan by China. The only things holding China back at the moment are 80 miles of ocean and the belief that the US might respond forcefully if China attacks. A show of weakness by the US invites further aggression by authoritarian regimes around the world who are eager to see democracy in general and the US in particular fail. How does that help Americans?