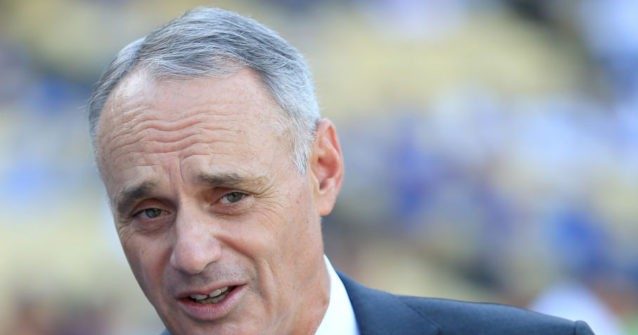 Major League Baseball’s (MLB) Commissioner Robert Manfred feared relocating the All-Star Game from Atlanta because the move would balloon into a “political event.”

According to a Fox Business report, after Stacey Abrams, LeBron James, and Al Sharpton urged MLB Commissioner Robert Manfred to relocate the All-Star Game from Atlanta, the MLB Commissioner apprehensively made the decision.

Breitbart News reported the three individuals did indeed hold extensive discussions with the MLB Commissioner, influencing him to move the All-Star Game due to players potentially boycotting the event. But when the news broke of the relocation, Abrams tweeted she was “Disappointed @MLB will move the All-Star Game, but proud of their stance on voting rights. GA GOP traded economic opportunity for suppression.”

Abrams honesty about her current stance “is suspect,” Fox News reported. However, LeBron James, who holds huge sway with the sports world and social justice warriors, has continued his opposition to Atlanta holding the All-Star Game.

Meanwhile, the MLB Commissioner rendered his final decision, telling “the eight-member executive committee before making the announcement, which surprised the 22 other teams.” But Manfred “said the decision was made after discussions with the MLB Players Association and its Players Alliance.”

The game was ultimately relocated to Denver, home of the Colorado Rockies, who play at Coors Field, which is named after a “founder of the Heritage Foundation, Joseph Coors, the former president of Coors Brewing Company, who died in 2003 after setting up a legal foundation that challenged part of the Voting Rights Act,” Breitbart News reported Tuesday.

The upheaval over the All-Star Game comes after the State of Georgia’s legislature took action on election integrity by limiting the number and location of drop boxes, reforming voter ID requirements, and expanding early voting access statewide while modernizing the state’s voter rolls.

Ilhan Omar Committed a Crime by Failing to Report income she...

Devin Nunes is the Traitor to the Conservatives