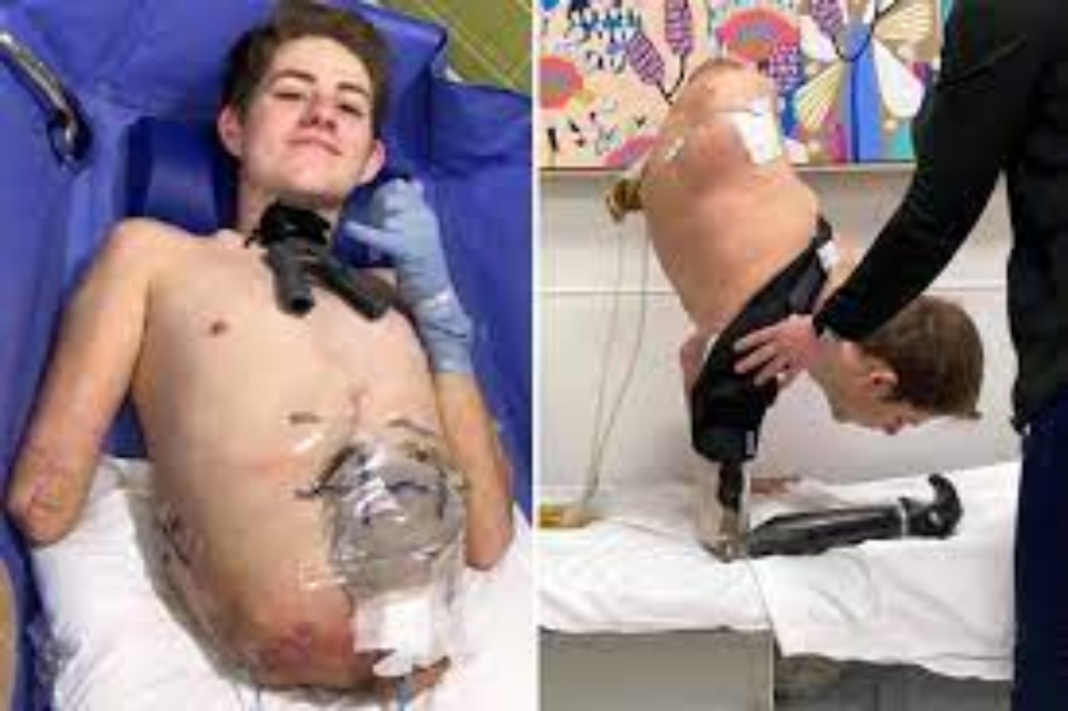 On September 21, 2020, the 19-year-old was working on a bridge reconstruction project and was driving a forklift across the bridge when a car tried to illegally pass him. As he veered away from the vehicle, his forklift ran over the edge of the road and the ground gave way, causing him and the forklift to plummet 50 feet.

Loren tried to unbuckle himself so he could launch himself away from the tumbling forklift, but his leg was stuck and the machine crushed his arm and legs. What’s worse, the teen never lost consciousness and witnessed the entire event, including seeing his right arm had completely exploded. Great Falls local news station KTRV quoted Schauers as sharing:

“I remember looking to my right with the forklift on top of my body and there was big old piece of muscle from my arm just lying on the ground next to me. It had just blown apart instantly from the impact.”

A man who witnessed the accident jumped out of his car and raced down the embankment to help Loren, who was screaming in panic, even though he couldn’t feel anything. Mercy Flight was called and transported Schauers to a hospital in Bozeman, but they were unequipped to deal with the extensive nature of Loren’s injuries, so he was transported again by flight to Harborview Medical Center in Seattle.

After evaluating his injuries, doctors at Harborview concluded that the only way to give Loren a chance at surviving was to perform a hemicorporectomy, a surgery that amputates everything from the waist down. The teen didn’t hesitate to give his permission, with his girlfriend, Sabia Reiche, speaking on his decisive attitude:

“He looked them dead in the eye and he said, ‘I don’t care if I’m just a head on a plate,’” she said. “They’re going to do the surgery and they’re going to keep him alive.”

Loren shares some of his thoughts about his accident and recovery in a YouTube video that has received over a million views:

“Every medical professional I come across is pretty amazed by everything, especially with the story that comes along with my injuries. It wasn’t a hard choice to have half of my body amputated – it was basically a choice of living or dying. With Sabia assuring to stay by my side no matter what and all my immediate family being around me, it really wasn’t a hard choice for me!”

Even after the drastic surgery, Schauers was not out of the woods. Within the first month of his three-month-long hospital stay, his family and Sabia were told six separate times to say goodbye to him because his prognosis was so bad.

After a grueling three months in the hospital, followed by four weeks of intensive physical therapy, Loren was finally released and sent home to continue to heal and get accustomed to his new way of living.

His rapid rate of healing and improvement shocked his doctors who had predicted he would need to be in the hospital no fewer than 18 consecutive months before being strong enough to go home, according to the DAILY MAIL.

Loren is home and enjoying life with Sabia, his now fiancé. The couple plan to marry on their anniversary of July 17. He has worked hard to gain back what independence he can, and now knows how to put on his prosthetic bucket himself, his determined and positive mindset leading the way through his incredible recovery.

Those wishing to donate to Schauers’ recovery or to get in touch with him can do so on Twitch (@iAceNation) or YouTube (Sabia and Loren).

Jason Miller: “Who is Paul Ryan?”