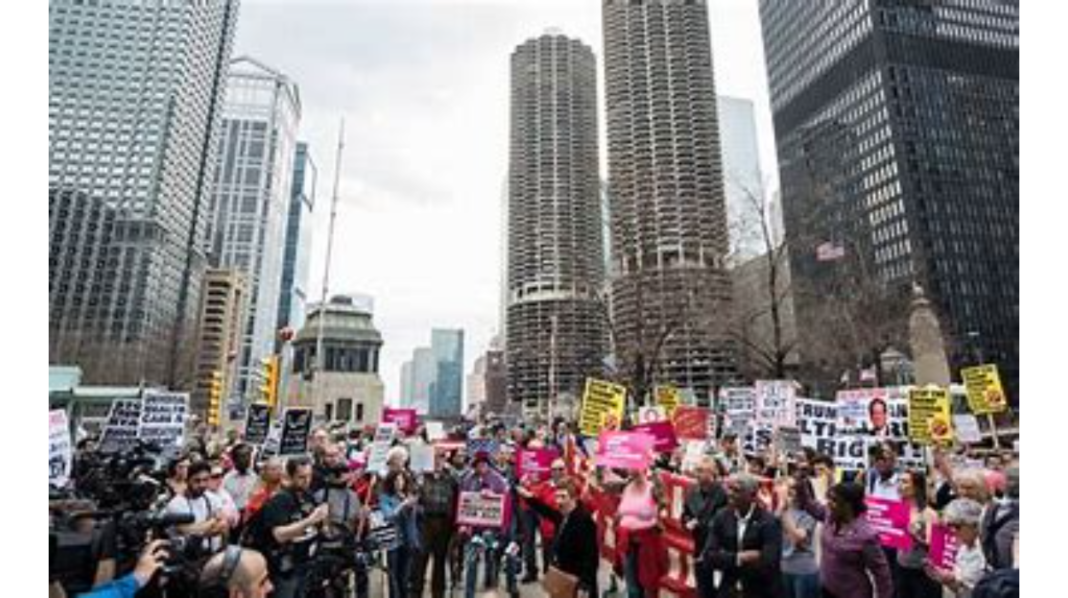 Big question mark on the “and teachers unions too” part. Democrats can’t survive without union support. Whatever rift ends up opening between the party and the degenerates who voted last night to harm kids in Chicago will be papered over in time.

But if perceptions grow among Democratic voters that the unions don’t have their kids’ best interests at heart, that could make for some interesting electoral politics.

This plea from one well-known liberal doesn’t surprise me. Axelrod is a political operative and knows how closures are apt to play at the ballot box. We’ve already had proof of concept from the Virginia gubernatorial election. The GOP is going to grind the Chicago vote in Democrats’ faces, and they’ll deserve it. Ax tried to get ahead of that:

The Chicago Teachers Union is about to vote to walk out rather than return to classrooms amid Omichron surge.
I hope every teacher reads this column.
What our kids have suffered thru long absences from classrooms already has had a devastating impact. https://t.co/VRVMQIDhTY

This one surprised me a little, although I don’t know if Morning Joe quite qualifies as a liberal:

“If you don’t want to teach, don’t teach. Quit. Just stay at home and stop teaching children, okay? … You are either ignorant when it come to science or you just don’t want to be in classes.”

This one surprised me more:

I feel like there’s a weird memory-holing of the fact last spring Congress distributed $123 billion dollars to K-12 schools for Covid preparedness. That’s nearly $1 million *per school*. So big q is: what was that used for?

And this one surprised me a lot given the source, although maybe it shouldn’t have. Nikole Hannah-Jones, union enemy?

We have to be able to talk abtthe harms of remote learning in a society where vaccines are available for all teachers without being accused of being anti-union or anti-teacher. We can disagree on what is the best thing to do when there are no good options without that accusation.

“I’m sorry, but teachers are not the only stakeholders and I’m kind of tired of the conversation going this way,” she tweeted elsewhere. Hannah-Jones doubtless knows that it’s low-income kids who’ll suffer the most from school closures because they don’t have the tech equipment at home to switch over easily to remote learning. But even so, it’s jarring to see a leftist grumbling about labor flexing its muscle in a spat with the city. The plain truth here turns out to be inescapable even for the mastermind of the 1619 Project, that it’s ludicrous for teachers to walk out in protest of kids not being tested for COVID when every educator in the country has been eligible for vaccination for months. If you’re a teacher who’s worried about catching the virus, get boosted. You’ll have a mild case when you do. End of debate.

Meanwhile, spare us the self-congratulation about how important your job is to society given your disinterest in doing it. Walmart cashiers have been on the job every day for two years with customers breathing in their faces because they need to make ends meet and because someone has to run the checkout aisle. Same goes for meatpackers, cops, and a thousand other front-line professions, only a few of which could plausibly stake a claim to be as important to America’s future as teachers are and only a very few of which involve the care and development of children. Yet only one profession reliably balks at doing its duty despite having been prioritized for early COVID vaccination and having received enormous gobs of money from Uncle Same this past year to make their workplaces safer. It’s somehow the most important job in the world yet also the least important.

Chicago teachers bragged on Facebook about potentially being eligible to receive reimbursements for sick days they scheduled for Wednesday, which they no longer need to take because of the closing. Fourth-grade teacher Jessica Witt posted that the district should “run me back my sick days.”

“I feel no pain. They can cancel school until June and I’ll be fine,” Derrick Colon, who identifies himself on Facebook as a Chicago Public Schools dean, replied to a post in the union’s private Facebook page. “Been training for this moment all my life.”

They’re leeches who don’t care about kids. Their assessment of their risk from being around students who haven’t been tested is so grossly incongruous with the actual risk that they’re either deliberately goldbricking and using COVID as an excuse or they’re still so ignorant of the dynamics of the virus after two years that they can’t rationally gauge the threat. Either way, they shouldn’t be instructing children in anything.

Which is not to say they’re all of a piece:

Someone passed this along to me. Chicago teachers are voting on strike and closing schools and going back to virtual. This teacher dissents. pic.twitter.com/ufywxUXhFm

Notably, some of the doctors whom I follow on social media and who are typically known for encouraging restrictions to contain COVID have also begun pounding the table lately to keep schools open. Case in point:

At every turn during this pandemic

We have deprioritized children

Great @DLeonhardt thread on how American kids are in a crisis

And many don’t fully grasp how bad it is https://t.co/PckweR2LFS

No one has been more outspoken in the last few days than Leana Wen, a frequent CNN contributor who spent most of the past year demanding that the rules be tightened on the unvaccinated to force them to get their shots. She’s also been an advocate for vaccinating kids, something even many vaxxed parents are wary of. But Wen has been logically consistent this week: Having pushed hard to get teachers and students immunized, she’s done with excuses for keeping schools closed. They’re plenty safe, and as safe as they’re going to get. Everything else is noise.

We in public health fought for teachers to be prioritized for vaccines.

Teachers unions: Please stop the delays. We need all schools to be in-person, now.

Striking quote from @PedsDanny on @AC360:

“Closure of public schools is the biggest public health failure of our lifetime. Why do we want to do that again?”

Schools remain one of the safest places for children from a #covid19 transmission standpoint.

This is not 2020 or 2021. Omicron is a milder variant, and there are highly effective tools now (i.e. vaccination + masking).

Teachers and students are far more likely to be infected at social gatherings, restaurants, etc than at school. https://t.co/HlcIkrsbBG

We are in a very different place compared to a year ago. Vaccines are widely available. Omicron is milder than previous variants. People vaccinated & boosted are generally protected from severe illness. The US cannot close schools + shutter businesses. @CNNSitRoom @wolfblitzer pic.twitter.com/uHxFlw7ZDv

Enough’s enough. The goldbricking by the unions is extracting a severe developmental and psychological cost on the most vulnerable element of society, kids. That cost has been amply documented by the media over the last few months, to its credit. And yet: “More schools closed and went remote across the U.S. within the past few days than at any other time this academic year, leaving communities rushing to reorganize in the wake of what are often last minute decisions.” Whatever needs to be done to get teachers back on the job — docking their pay, taking away their vacation days, firing a few pour encourager les autres — do it.

I’ll leave you with this notable clip from another influential liberal, Biden’s COVID czar, Jeff Zients. He indirectly addressed the Chicago teachers’ walkout during this morning’s CDC briefing and, although polite, made clear how unjustifiable he thinks it is. Teachers got to cut the line for vaccines, they got showered with federal cash to make their classrooms safer, and the kids they’re supposed to be educating are sinking deeper into a learning-loss hole with each day they’re off the job. No more excuses. Get back to work, parasites.

‘We know how to keep our kids safe in school’: The White House says the U.S. has the tools needed to keep schools open despite a surge in COVID-19 cases https://t.co/gs7LY0h4p8 pic.twitter.com/ZcMD3KFKJs