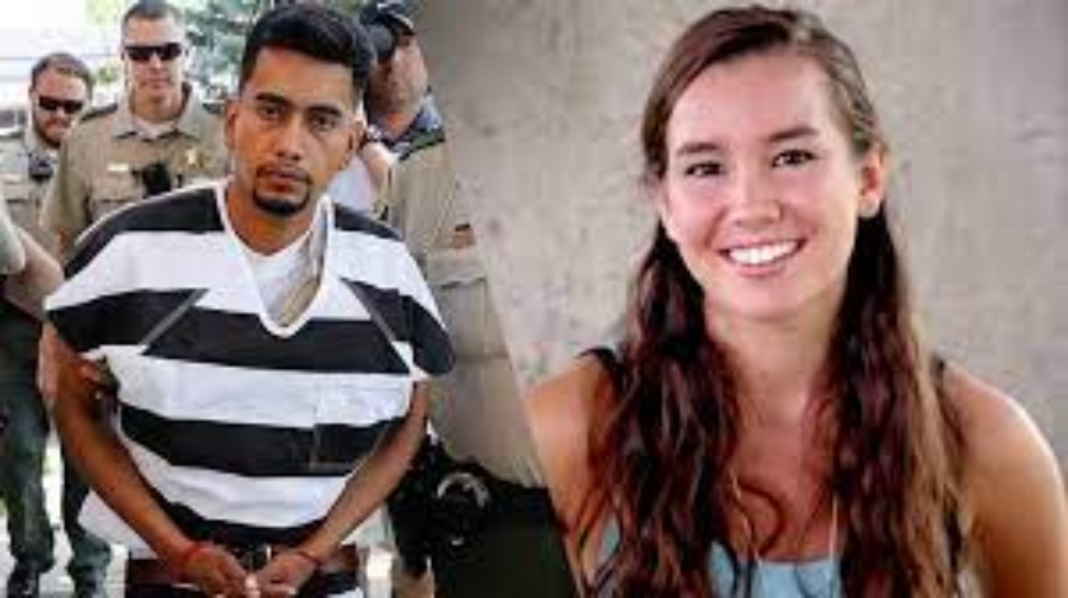 The man on trial for the murder of Mollie Tibbetts has long claimed that his memory went blank sometime between the time he saw Tibbetts jogging along the road and the time he “realized” her body was in the trunk of his car. Today Christhian Rivera took the stand in his own trial and claimed he was suddenly ready to reveal what really happened. He claimed two masked men showed up at his home, ordered him into his car and then after a drive one of the men killed Tibbetts and put her body in his trunk:

In a surprise development, the defense called Cristhian Bahena Rivera as a witness at his first-degree murder trial. He admitted that his black car was the one seen on surveillance video circling Mollie Tibbetts while she was jogging in Brooklyn, Iowa, on July 18, 2018. He also acknowledged that she ended up in his car’s trunk, that he hid her body in a cornfield and told investigators where to find it a month later.

Bahena Rivera said two armed men who were wearing black and had their faces covered by stocking caps showed up at his trailer after he finished showering that evening. The men directed him to get in his car and drive, and they passed Tibbetts as she ran several times before directing him to stop, he said.

Bahena Rivera, 26, said a man with a knife got out of the car and walked down the rural road. The man was gone for about 10 minutes as the second man in the back seat of the car grew nervous, saying, “Come on, Jack,” he claimed.

The reference to “Jack” isn’t coincidental. The defense has attempted to portray Mollie’s boyfriend Dalton Jack as a person with anger problems (who therefore might have killed Mollie). The problem with this claim is that Dalton Jack was 100 miles away on a construction job when the murder took place. Asked directly by his attorney if he knew one of the people in the masks was Dalton Jack, he said no.

Rivera claims the two men put “something” in his trunk and then took him to the field where the body was later found and walked away. They allegedly threatened his family by name. Once the men were gone Rivera claimed he looked in his trunk, discovered Tibbetts body. He decided to hide it in the field to avoid being blamed.

There are so many problems with this story I hardly know where to start. For one thing, Christhian Rivera doesn’t speak much English. He needed a translator during police interviews. He has listened to the entire trial via a translator in headphones. He gave his testimony today in Spanish. So how is it that two English speaking men showed up and told him what to do and he was able to follow their instructions? When asked about this by his attorney, Rivera replied (in translation) “I don’t know how to speak a lot of English but I understand the basics.”

Second, if this really happened, why didn’t Rivera mention any of it during his initial interview with police? He now claims he was worried the unknown men would harm his daughter so he lied to investigators about not remembering what happened. He also apparently made up the details about Tibbetts getting angry that he was following her and threatening to call police on him.

This is quite a fantastic story to say the least. These two men somehow arrived at his trailer with no visible car and then disappeared by walking down a rural road also without a car. He doesn’t know who they are or where they came from. Very convenient.

On cross examination the prosecutor also asked this question: Why would the two men need your help? An objection (speculation) meant Rivera didn’t have to answer but it’s a good question. According to his own story, he didn’t do anything except drive and then, of his own accord, decide to hide her body in a corn field. But if these two mystery thugs wanted to kill Mollie Tibbetts, why involved a complete stranger in the plan and risk exposure or something going wrong. It just doesn’t make much sense. If they wanted a patsy, why not tip off police to check Rivera’s trunk? But the police had no leads for nearly a month.

The full testimony from today is available below. His attorney spent the first 25 minutes asking about his life in Mexico, his decision to come to America and his work at the farm before moving on to the question about whether he’d told the police the truth during his long interview in 2018. I have this queue up to the part where he suddenly starts telling his brand new story about what happened that night. It goes on for a while including some breaks in testimony.