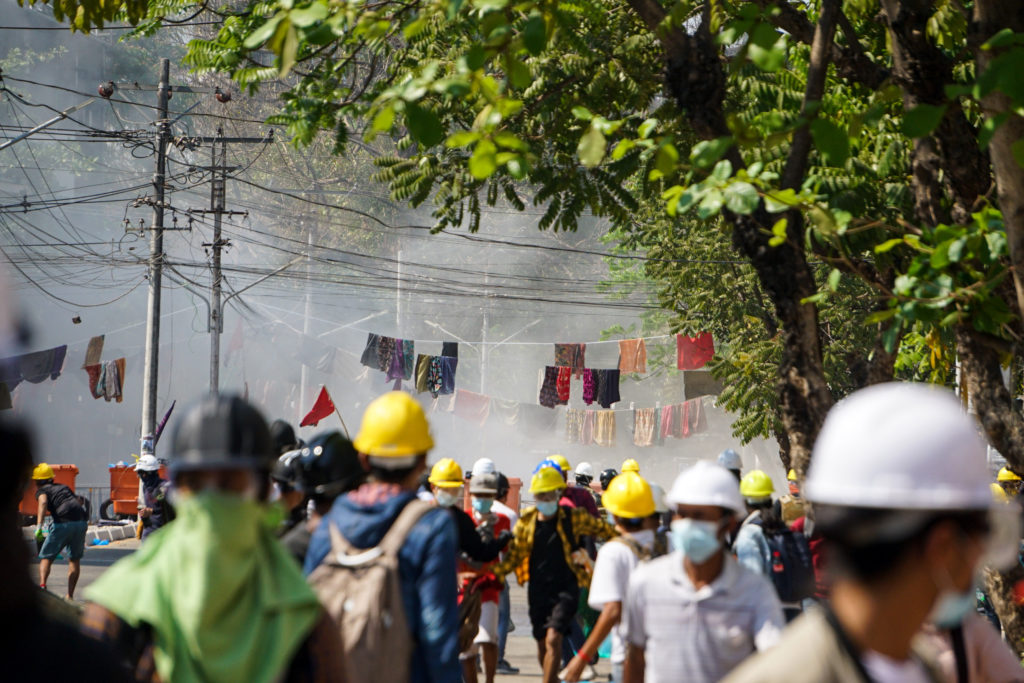 YANGON, Myanmar (AP) — Myanmar’s wireless broadband internet services were shut down on Friday by order of the military, local providers said, as protesters continued to defy the threat of lethal violence to oppose the junta’s takeover.

A directive from the Ministry of Transport and Communications on Thursday instructed that “all wireless broadband data services be temporarily suspended until further notice,” according to a statement posted online by local provider Ooredoo.

After weeks of overnight cutoffs of internet access, the military on Friday shut all links apart from those using fiberoptic cable, which was working at drastically reduced speeds.

Access to mobile networks and all wireless — the less costly options used by most people in the developing country — was blocked.

The Norwegian telecoms company Telenor, one of the biggest carriers in Myanmar, confirmed it could no longer offer wireless services. It was offering fiberoptic service of up to 40 megabits per second in its packages as of Friday, well below high-speed access, which is a minimum of 100 Mbps.

The government has shut down all but a handful of fully military-controlled media outlets. Some of those banned or whose operations have been suspended have continued to publish via social media or whatever methods they can find.

Facebook announced it was providing a safety feature to enable users in Myanmar to beef up security settings locking their profiles to prevent access by non-friends. That includes preventing non-friends from enlarging, sharing or downloading full-size profile and cover photos and seeing any posts on a person’s timeline.

Facebook and other major social media platforms have banned members of the Myanmar military, also known as the Tatmadaw, and are blocking ads from most military-linked commercial entities.

Also Friday, a South Korean bank said it temporary closed its branch in Yangon and was considering bringing its South Korean employees back home after security forces fatally shot one of its Myanmar employees.

Noh Ji-young, a spokesperson for Shinhan Bank, said the woman was shot in the head while commuting home from work on Wednesday and was pronounced dead on Friday.

The bank did not disclose further personal details about her. South Korea’s Foreign Ministry said the woman was shot while Myanmar security forces inspected the company car she was using.

The ministry said it has issued a warning to South Korean nationals in Myanmar to act with caution when they are inspected by security forces.

“This is a reaction to the ongoing violent clashes between the military and the civilian population,” the company said in a statement. It said it had previously restricted business.

With its economy contracting under pressure from mass disruptions in reaction to the coup and from the pandemic, Myanmar’s military leaders are expected to order an increase in the money supply by the central bank. It was unclear how much of an impact the German company’s move would have.

The New York-based Human Rights Watch issued a report Friday saying that Myanmar’s military has forcibly disappeared hundreds of people, including politicians, election officials, journalists, activists and protesters and refused to confirm their location or allow access to lawyers or family members in violation of international law.

“The military junta’s widespread use of arbitrary arrests and enforced disappearances appears designed to strike fear in the hearts of anti-coup protesters,” said Brad Adams, Human Rights Watch’s Asia director. “Concerned governments should demand the release of everyone disappeared and impose targeted economic sanctions against junta leaders to finally hold this abusive military to account.”

The crisis in the Southeast Asian nation has escalated in the past week, both in the number of protesters killed and with military airstrikes against the guerrilla forces of the Karen ethnic minority in their homeland along the border with Thailand.

In areas controlled by the Karen, more than a dozen civilians have been killed since Saturday and more than 20,000 have been displaced, according to the Free Burma Rangers, a relief agency operating in the area.

About 3,000 Karen fled to Thailand, but many returned under unclear circumstances. Thai authorities said they went back voluntarily, but aid groups say they are not safe and many are hiding in the jungle and in caves on the Myanmar side of the border.

The U.N. Human Rights Office for Southeast Asia called on countries in the region “to protect all people fleeing violence and persecution in the country” and “ensure that refugees and undocumented migrants are not forcibly returned,” U.N. spokesman Stephane Dujarric told reporters in New York.

The U.N. Security Council late Thursday strongly condemned the use of violence against peaceful protesters. The press statement was unanimous but weaker than a draft that would have expressed its “readiness to consider further steps,” which could include sanctions. China and Russia, both permanent Council members and both arms suppliers to Myanmar’s military, have generally opposed sanctions.

The statement came after the U.N. special envoy for Myanmar warned the country faces the possibility of civil war and urged significant action be taken or risk it spiraling into a failed state.

Earlier this week, an opposition group consisting of elected lawmakers who were not allowed to be sworn into office Feb. 1 put forth an interim charter to replace Myanmar’s 2008 constitution. By proposing greater autonomy for ethnic minorities, it aims to ally the armed ethnic militias active in border areas with the mass protest movement based in cities and towns.

More than a dozen ethnic minority groups have sought greater autonomy from the central government for decades, sometimes through armed struggle. Even in times of peace, relations have been strained and cease-fires fragile. Several of the major groups — including the Kachin, the Karen and the Rakhine Arakan Army — have denounced the coup and said they will defend protesters in their territories.

The coup reversed years of slow progress toward democracy in Myanmar, which for five decades languished under strict military rule that led to international isolation and sanctions. As the generals loosened their grip, culminating in Aung San Suu Kyi’s rise to leadership in 2015 elections, the international community responded by lifting most sanctions and pouring investment into the country.

OPEC Told Biden to Take a Hike After He Begged Them...