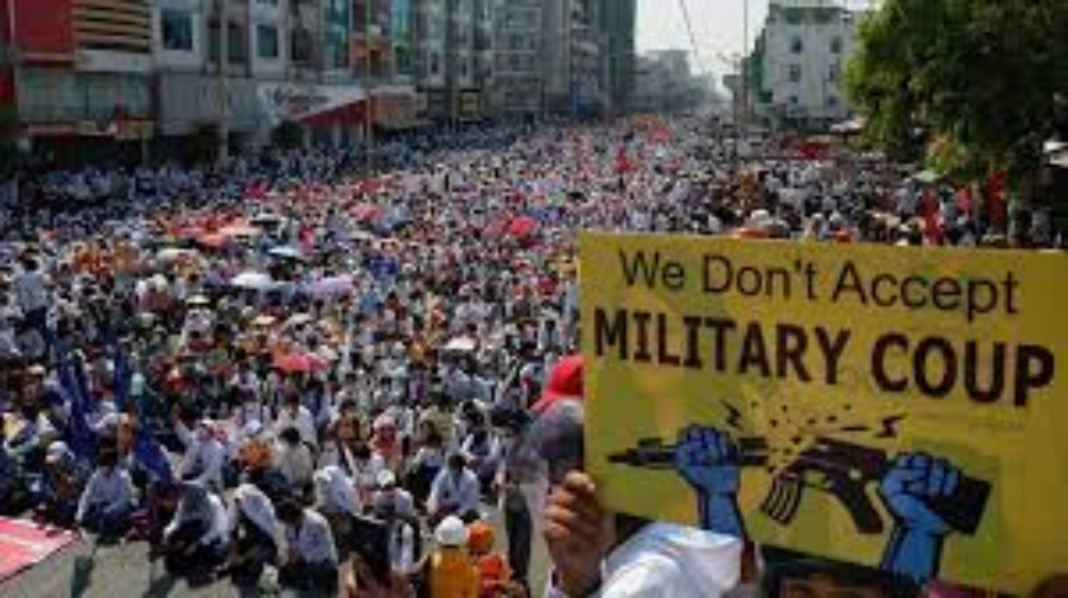 Myanmar has reported some 500 new COVID-19 cases daily since December. Back then, the government planned to launch a nationwide vaccination by early February, however, the plan was never executed as the military overthrew the government.

A United Nations report warned in March that Myanmar is heading for a food crisis in the next six months.

The hardships are being exacerbated by the pandemic that’s sweeping across the country. It’s not just the political unrest and mounting violence during the military crackdown on civilians that people have to cope with – skyrocketing prices, loss of family income, and surging COVID-19 cases are causing chaos.

Struggle for Food as Prices Increase

The UN’s World Food Programme (WFP) report has warned that Myanmar, a country which exported rice, beans, and fruit before the pandemic, will see millions of its people going hungry in the coming months.

The UN World Food Programme’s country director for #Myanmar has warned that civil unrest and growing economic paralysis risk pushing people in one of Asia’s poorest countries into hunger.https://t.co/Av62Z0nRED

Of those fleeing the military oppression in the country, an estimated 20,000 people are believed to have crossed over to the Indian state of Mizoram, which shares a porous border with the crisis-hit country, since the military coup in February 2021.

Non-governmental organisations in the Indian state have since then launched “assistance programmes” for the displaced and homeless.

Some of these people shared their challenges with Sputnik on condition of anonymity.

“The family of my brother-in-law was among those who left Myanmar in April and crossed over to our village, which is barely 25 kms from the border,” J. Suate from Mizoram (name changed on request).

“One kilogram of rice is now available at nearly three times the price it was in January this year. With most people out of jobs, food has become a major concern for people in Myanmar,” Suate added.

The UN report said that following the military takeover on 1 February 2021, the situation in Myanmar is deteriorating rapidly, with a high risk of increasing food insecurity and malnutrition, particularly for the urban poor.

“Demonstrations and the general strike throughout Myanmar are likely to exacerbate the socio-economic impact of COVID-19 lockdown measures, which saw 80% of households lose income,” said the UN report.

Myanmar remains one of the least developed nations in the world with an estimated 38 percent of the population living near or below the poverty line.

Price hikes have hit remote areas particularly hard: near the Chinese border in Kachin state, rice is almost 50 percent more expensive, according to the WFP.

The WFP estimates that within the next six months, as many as 3.4 million more people will go hungry in Myanmar and it is poised to triple its emergency food assistance.

COVID-19 Pandemic Turning Lethal in Myanmar Along With Military Crackdown

The military oppression has left over 800 protesters dead since the February, including children.

According to the Association for Political Prisoners, as of 26 May, 828 people were confirmed killed by the military, while 4,330 people are currently under arrest. Violence has been reported from across the country after people, including teachers and medical staff, joined the civil disobedience movement against the country’s armed forces and held pro-democracy demonstrations.

On the morning of June 8, Junta terrorists raided Hinthama village in #Singu and abducted anyone they saw. 4 men and a woman were arrested. The abductees, who had been abducted since 11 am, were reportedly tied up in the hot sun and had not been given any food so far.#June8Coup

Amid this deep political crisis, the pandemic is just another blow to the people. Myanmar has reported 144,317 coronavirus cases and 3,225 deaths. On 4 June, over 200 cases were reported from across the country – the highest in over four months. Many of the cases are from Chin state that borders India, raising concerns that the more transmissible variant found in India is now spreading in Myanmar.

“We have seen an increasing number of refugees, who have thronged the camps set up in the state, complaining of fever and COVID-19 like symptoms.”

“On government’s instructions, we have admitted several people into the State hospitals. Many have recovered and have been discharged,” L Vlanatana, a volunteer at an NGO in Mizoram, told Sputnik.

Coronavirus testing collapsed after the coup as a large number of health workers, including doctors, and paramedical staff joined civil disobedience movements to protest against the military that ousted the National League for Democracy (NLD) government.

State Counsellor Aung San Suu Kyi, President Win Myint, and other top leaders of the previously ruling NLD remain under arrest. More than half of Chin state in northwestern Myanmar has been locked down after the military regime imposed stay-at-home orders for four more townships in the state due to COVID-19 spike.

Tonzang township bordering India is seeing a rapid spread of coronavirus, reporting 20 to 52 cases daily in recent days. The military has made repeated calls to the medical workers who have joined civil disobedience movements to return to work.