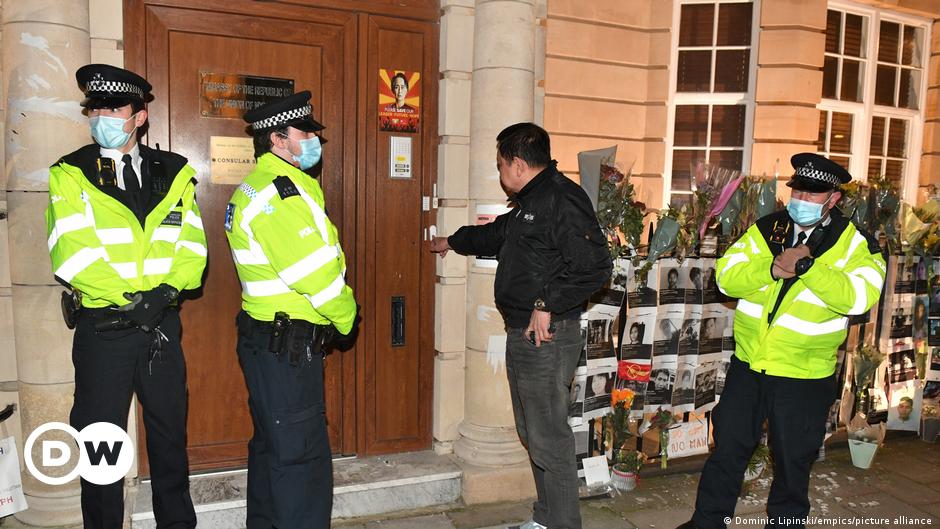 Demonstrations against Myanmar’s ruling junta broke out in London on Wednesday after the Myanmar envoy to the UK was reportedly locked out of the embassy in the city. Myanmar’s ambassador to the UK, Kyaw Zwar Minn, said the embassy has been seized by the military attache.

“When I left the embassy, they stormed inside the embassy and took it. They are from the Myanmar military,” Zwar Minn told the British Daily Telegraph newspaper. “They said they received instruction from the capital, so they are not going to let me in.”

“They are not able to do this. The British government won’t allow this one, you’ll see that,” Zwar Minn continued.

Protesters gathered in front of the embassy to denounce the military’s seizure of the building. London police have said there have been no arrests of demonstrators so far.

The British Foreign Office said it is aware of the situation and seeking further information about the incident.

Why was the ambassador locked out of the embassy?

Zwar Minn had previously spoken out against the military in Myanmar, calling for the release of detained leader Aung San Suu Kyi. Myanmar’s military, known as the Tatmadaw, arrested Suu Kyi and other members of the ruling National League for Democracy party on February 1 in a coup d’etat, with army general Min Aung Hlaing becoming the country’s de facto leader.

Zwar Minn had represented Myanmar in London since 2013. He had previously met with UK Foreign Secretary Dominic Raab last month to discuss the ongoing crisis in Myanmar, with Raab praising his “courage and patriotism in standing up for what’s right.”

How has Myanmar’s ruling military junta treated the opposition?

Myanmar’s military has engaged in a widespread crackdown against the pro-democracy movement opposed to the February 1 coup. Min Aung Hlaing said Wednesday the pro-democracy protesters intend “to destroy” the country.

The Thailand-based Assistance Association for Political Prisoners (AAPP) human rights group claims about 600 civilians have been killed since the coup. The AAPP said Wednesday the military is now focusing on crushing dissent in rural areas in order to maintain a hold on the country.

So far, most Western nations such as the US, UK and Germany have condemned the coup and imposed sanctions on military leaders. China, a traditional ally of the Tatmadaw, has called for Suu Kyi’s release, while Russia has sought to strengthen its ties with the ruling military junta.

Employees Returning to the Office at Highest Rate