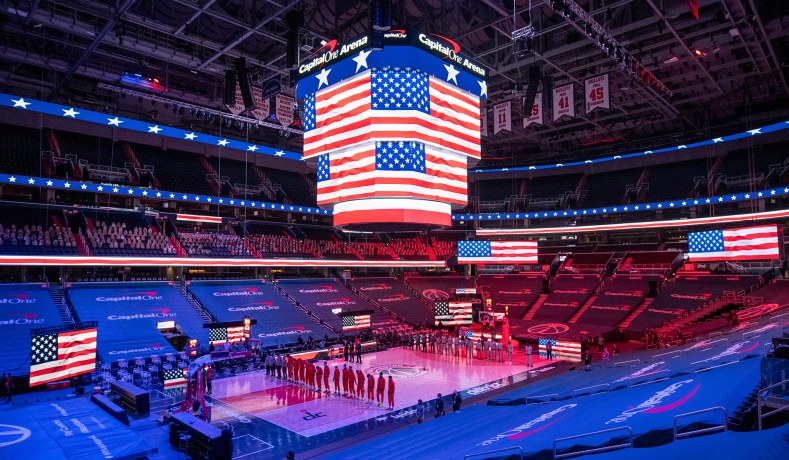 I’m not quite on the same page with Rich on Mark Cuban’s effort to halt the anthem protests by halting the anthem’s playing. I wrote about this over the summer, in connection with the NBA-inspired boycotts:

The Left ruins everything.

I know, I know; you want to blame conservatives, too. Well, yes, we do want norms respected and preserved. I would like everyone to stand in unison for the national anthem: a couple of minutes that invite our attention to being one national community, to forebears who sacrificed for the preservation of our free society, to the duty of preserving it for our children.

We’re about pluralism, not my way or the highway. “The Star Spangled Banner,” which was not even the national anthem until 1931, was not routinely played before sporting events until World War II. I have no sympathy for the racialist indictment against the anthem or the American flag, but I respect your right to believe that indictment and take offense at patriotic displays. We are talking here about coming together to enjoy a ballgame, not to air our political disputes. I wish patriotic displays were not controversial, but fine: If playing the anthem sullies the experience for a sizable number of fans, let’s not do it. There are plenty of other forums for arguing politics and wondering whether a nation can remain a nation if its symbols repel a critical mass of its people.

I haven’t changed my mind in the ensuing months. I wish we had enough national unity that the playing of the anthem were not controversial. I wish the Left had not made such inroads that it is considered credible to equate displays of patriotism with racism. That may be a fringe sensibility, though I fear it is more than that. The sensibility punches above its weight, in any event, because people who are prominent in popular culture and the media espouse or sympathize with it. In point of the fact, part of what makes the country great is that we guarantee the right to believe and act on such slanderous ideas, as long as it is done peaceably and lawfully.

In this last awful year, when sports were needed more than ever as a distraction, I’ve watched less pro- and college-sports coverage than ever. The protests and the incessant woke messaging are the main reason. I’m too in love with sports to tune them out completely, but I have a much lower aggravation threshold than I used to. If what you love becomes a constant irritant, you learn to love it less.

Anyway, I’d rather the teams refrained from playing the anthem than that it be expected that I simply accept the displays of contempt for my country as if I endorsed them. The leagues are fully within their rights to permit this behavior, but the rest of us are within our rights to find other things to watch.