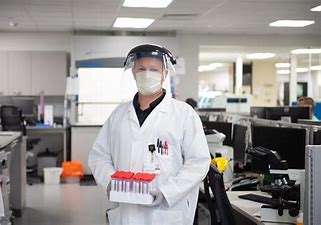 The end of mandates doesn’t mean the end of masks, of course. It’s every person’s prerogative to mask voluntarily in accordance with their level of risk tolerance. If it makes you feel better to cover up when you’re in a crowded store, go nuts.

If it is too much to ask, a cynic might conclude that “follow the science” was always just code for “take maximum precautions no matter what.” If the CDC now feels comfortable enough to say that masks aren’t necessary in communities where hospitals aren’t under strain, why isn’t that sufficiently convincing for the science-followers to unmask?

Gerald Harmon, president of the American Medical Association, greeted Friday’s CDC announcement that the guidance had been relaxed with a resounding “no thanks.”

“But even as some jurisdictions lift masking requirements, we must grapple with the fact that millions of people in the U.S. are immunocompromised, more susceptible to severe COVID outcomes, or still too young to be eligible for the vaccine. In light of those facts, I personally will continue to wear a mask in most indoor public settings, and I urge all Americans to consider doing the same, especially in places like pharmacies, grocery stores, on public transportation— locations all of us, regardless of vaccination status or risk factors, must visit regularly. Although masks may no longer be required indoors in many parts of the U.S., we know that wearing a well-fitted mask is an effective way to protect ourselves and our communities, including the most vulnerable, from COVID-19—particularly in indoor settings when physical distancing is not possible.

“Wearing a mask, physical distancing, and staying home if you’re sick are small, but important protective measure that can help us all stay safe. While the Omicron surge has declined, COVID-19 is not gone. We must remain adaptable and vigilant in confronting this unpredictable virus.”

How else can that be read except as a call to mask in perpetuity? COVID won’t be eradicated; even if it could be eradicated, the immunocompromised would still be at risk from more pedestrian viruses like the flu.

And given the august title he enjoys, it’s a cinch that many people who remain skittish about infection will follow his advice rather than the CDC’s. One of the shining lessons of the pandemic is that when people want to confirm their priors about the threat from the virus, they’ll go hunting for information until they find some that does that. The “forever maskers” just got a big wet kiss from the top dog at the AMA despite Rochelle Walensky’s best efforts to bring their anxiety down a notch.

It’s not just Harmon, Axios notes. Other influential doctors greeted the new guidance with pleas to … just sort of ignore it, at least in some settings:

“The federal government should make N95s or their equivalent widely accessible and free of charge to all who want to keep masking,” Leana Wen argued in an op-ed. “Businesses can also do their part, for example, by designating specific hours for shoppers during which everyone must don high-quality masks.”

New York Mayor Eric Adams put it well when he explained why he’s finally dropping the mask mandate for his city’s public schools: “When we take off the mask, we’re going to start to show that we’re open. It’s just a symbol that we are back.” Conversely, top doctors nudging people to keep masking is a symbol that we’re not back. Which is why they continue to resist it, I think: Until we enjoy a long, long spell without any major COVID surges, they want the country to remain on a pandemic “war footing,” so to speak. Keep your guards up until we’re very sure that there’s no new wave on the horizon.

In other words, there’s been a rupture between the expert class’s mission to be pandemic warriors and the Democratic establishment’s mission to hold down losses in November. Despite the impulse among liberals to take maximum precautions in all situations, the State of the Union tomorrow night will be mask-optional — even though the room will be filled with vulnerable geriatrics. The political cost of sustained abnormalcy has finally led Dems to dispense with excessive caution. Not so their friends in the medical establishment, who don’t need to worry about elections.

I’ll leave you with this guy, who’s finally ready for normalcy in Florida — Florida! — after two years of his party stridently opposing that idea.

After two years battling the pandemic — it’s finally time to responsibly turn the page on COVID.

I’m running for governor to rebuild our economy, schools, and unite us together again as Floridians. pic.twitter.com/DY8noQ2LvG