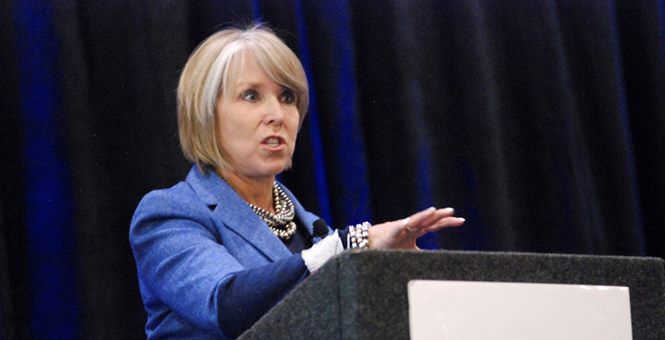 New Mexico Governor Michelle Lujan Grisham, a Democrat, finds herself in a mess of her own making. She is being criticized for using money from a taxpayer-supported expense fund for purchases of groceries and alcohol, along with dry cleaning. Wagyu beef, anyone?

According to a report detailing purchases made with the expense fund released last week, the governor continued to hold in-person meetings with staff at the governor’s mansion even as she ordered New Mexicans to not mix households to avoid spreading the coronavirus. About half of the $13,500 in question went toward food for the governor’s Cabinet members and staffers during those meetings, as confirmed by the governor’s spokesman Tripp Stelnicki.

“I didn’t realize the governor was so underpaid that she has to use discretionary money for things that she should be paying for herself,” state House Minority Whip Rod Montoya, a Republican, told the New Mexican. “Legislators are all up here doing our job, and we’re doing it on per diem.”

“It’s not what tax dollars ought to be spent for,” New Mexico House Minority Leader Jim Townsend of Artesia told the paper. “In a time when people are hurting all over the state, using their tax dollars to buy Wagyu beef has got to be a little bit disenchanting to many people.

“I think it’s just more of indication of the problem that we have had, and the governor has had, connecting with people,” he added.

Here’s the kicker – Governor Grisham held a virtual news conference Friday and she threw her assistant under the bus. See, the governor didn’t make those purchases, a “woman who works here [who] is a rock star,” made those purchases. By calling her a rock star, the governor tries to cushion the stab in the back of her assistant. The rock star mismanaged taxpayer money. “I don’t want New Mexicans to feel like I don’t take seriously their hardship,” Grisham told reporters.

Stelnicki, her spokesperson, explained that the $200 booze purchase was for a holiday party that was canceled. He claimed the purchased bottles of alcohol remained unopened. If the bottles are unopened, doesn’t that raise the question of why they weren’t just returned for a refund? That’s what regular people do with purchases that go unused – they return them for a refund. I mean, if the governor wants to relate to regular New Mexicans, that would be a pretty small, basic gesture. Just a thought I had.

This isn’t the first time that Governor Grisham has been shown to be out of touch with the people of New Mexico, especially during the pandemic. She shut down traffic in and out of an entire city over the coronavirus, she shut down grocery stores during the holiday season which limited residents’ ability to purchase food, and she rationed COVID-19 care in hospitals. She also blamed the Civil Guard, calling them “instigators”, when a man was shot as protesters tried to tear down a bronze statue of a Spanish conquistador outside the Albuquerque Museum. Yeah, she’s a peach.

The governor’s spokesperson justified Grisham’s violation of her own orders on limiting exposure to those outside individual households. She wasn’t hosting Super Bowl parties, m’kay?

“There’s a difference between inviting someone into your house for the Super Bowl or someone’s birthday and having three or four Cabinet secretaries there to talk about their budgets amid an unprecedented economic downturn and to work out what we’re going to propose or recommend to the Legislature given the changing economic forecast,” he said.

“I mean,” Stelnicki added, “the governor does live there, but it’s not like she’s inviting them into her living room.”

Stelnicki didn’t know whether people who met with Lujan Grisham had to pass a COVID-19 test beforehand.

Biden put Grisham on the shortlist of vice-presidential candidates. Instead, we got Kamala Harris, so that turned out to be a lose/lose proposition for anyone but the far left.

The spending by the governor (or her assistant) happened despite a state law enacted in 2019 that set new limits on the use of the governor’s discretionary funds. Clearly, the governor thinks it’s fine to disrupt businesses other than her own as she conducts the state’s business. She didn’t switch to virtual staff meetings as other companies have done. She continued to bring people into her home, the governor’s mansion, whether it was her living room or not. Either we are all in this together or we are not. Elected officials continue to prove we are not, in fact, all in this together. Rules for the coronavirus and protecting taxpayer money is for chumps.