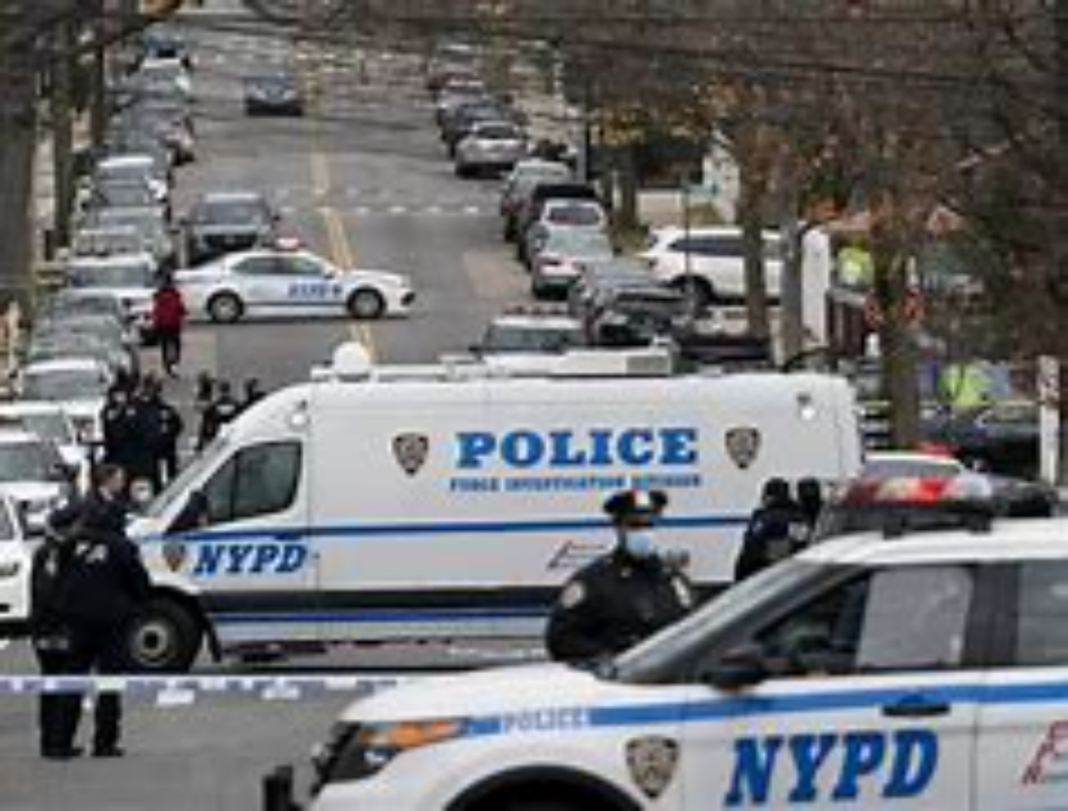 New York City is being roiled by the latest shooting In Times Square. At 5:15 p.m. yesterday, a criminal started firing a gun in that iconic location, and a bullet struck a Marine:

The man is accused of opening fire at about 5:15 p.m. Sunday and hitting 21-year-old Samuel Poulin in the back with a ricocheting bullet outside the Marriott Hotel on West 45th Street and Broadway, according to police and sources.

The shooter apparently has not yet been apprehended, but here he is:

This is by no means the only time a random person has recently been shot in Times Square.

Sunday’s shooting occurred just a block from where a 4-year-old girl and two others were hit by stray gunfire just last month.

Still, the city was stung, and the story was featured on the cover of the New York Post:

What do normal people think about taking a risk of getting shot when they visit tourist destinations like Times Square? (Or, to be fair, New York City in general?) Once again, the Post steps up: Flying bullets ‘not on my itinerary’: Tourists react to Times Square shooting:

Tourists visiting Times Square on Monday expressed fears for their safety — and the city’s future — following the second shooting there in as many months.

“Worrying about getting killed in a crossfire was not on my itinerary when I booked this trip with my girlfriends — especially while touring the biggest attraction,” said Pat Flanagan of Cleveland.

This observer thinks things are worse than in the bad old days of the 1970s:

Retired teacher Arthur Escalera of Harrisburg, Penn., who was vacationing with his wife, said Sunday’s shooting made it seem like “you’re in a city that’s lost the power to police itself.”

“We remember Times Square the way it was in the ‘70s and ‘80s, and if we had tickets to a Broadway show we would consider it a sort of walk on the wild side to walk down 42nd Street at night,” he said.

“But we never feared for our lives. Getting mugged was a fear, but death by a stray bullet? Never.”

This dialectic is going on in cities across the country: 1) Times are good, so voters elect feel-good liberal candidates who are supported by the local liberal press. 2) Those liberal politicians enact pro-crime, anti-law enforcement policies, which are cheered on by local media. 3) Crime, especially violent crime, increases rapidly. 4) While local newspapers and other media consider this a mystery, voters think they may have a clue. 5) Liberal politicians scurry for cover.

New York City is currently in stage 5: De Blasio vows to ‘flood the zone’ in Times Square in wake of shooting. Naive observers, untutored in the ways of liberal double-talk, might say: If “flooding the zone” is the way to keep violent crime down in Times Square, then maybe defunding the police and placing new restrictions on officers’ ability to identify and apprehend violent criminals were not good ideas. Especially since shootings in New York City in 2021 are up 43% over the same period last year.

One thing De Blasio has in his favor, however: he can rely on the New York Times to studiously refrain from connecting the dots.

California: Planned Parenthood activists are beefing up anti-Recall campaign to save...