Roce Today – Politics, Opinions, Gun Rights,Pro-Life and Border Wall
Home Politics No, we would never have told Zuckerberg to bury the Hunter laptop... 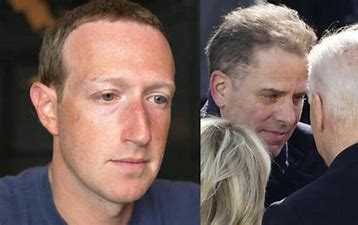 When Facebook/Meta honcho Mark Zuckerberg went on the Joe Rogan show recently, he created some waves by confirming something most of us were pretty sure of already. In the weeks before the 2020 election, the FBI directly contacted Facebook and told them that the Hunter Biden laptop story was going to drop and that it was “probably Russian disinformation.” Of course, the story was 100% real and not disinformation of any sort, but Facebook went ahead and suppressed the New York Post story about it anyway until Joe Biden was safely past the general election. Twitter similarly shut down the story and banned the Post from their platform for weeks. Last night, the FBI finally responded to Zuckerberg’s revelation, saying that they would never (perish the thought) engage in any sort of election interference and they “routinely provide foreign threat indicators” to social media platforms. And besides… they couldn’t make Facebook squelch the story. (NBC News)

The day after Mark Zuckerberg said that Facebook limited a polarizing story ahead of the 2020 election because of an FBI warning, the federal agency said it can only alert a private entity of a potential threat, not require it to take action…

In a statement Friday night, the FBI said it has provided companies with “foreign threat indicators” to help protect their platforms and customers, but that it “cannot ask, or direct, companies to take action on information received.”

“The FBI routinely notifies U.S. private sector entities, including social media providers, of potential threat information, so that they can decide how to better defend against threats,” the agency said.

Let’s start with two things that you won’t find in the linked NBC article. The first item of interest was revealed when Zuckerberg commendably agreed to a follow-up interview with Fox News. In that interview, he confirmed that the FBI had a direct line to someone at Facebook for passing along this type of “information.” And the notification was done only over the phone. Nothing was put in writing so there is no way for journalists to retrieve the warning through the FOIA process. (But I’m sure that’s just a coincidence, right?)

Here’s the second, and perhaps even bigger item. During that period several weeks before the election, the FBI had Hunter Biden’s laptop in their possession. They had the emails. They knew the story was true. This was confirmed well over a year ago when Fox interviewed Hunter Biden’s long-time business partner Tony Bobulinski, who was copied on some of the most damning emails. Just to be on the safe side, Fox interviewed Bobulinski again this week (Fox Nation subscription required) and he confirmed that the FBI never contacted him to get more information about the emails on the laptop and they still have not contacted him to this day, despite his name being plastered all over the relative documents.

How many ducks do we need to have lined up in a row before this becomes crystal clear? Will CNN or MSNBC accuse Zuckerberg of lying about this? (Because you know what a right-wing, MAGA-loving kind of guy he is, right?) Will any other cable news outlets or major papers ask the FBI to confirm that they not only had the laptop but that they were calling social media outlets to warn them about suppressing “misinformation” that was fully accurate information that they had in their possession?

I think we can just come out and say it at this point. In the runup to the 2020 election, the FBI was guilty of, at a minimum, gross incompetence, but that’s putting it far too charitably. They did something that they surely knew would result in provocative, accurate information related to the Biden clan being kept from the public and/or falsely described as “Russian misinformation.” That is pretty much the definition of election tampering. But it doesn’t sound like many people in the media plan on trying to uncover the rest of the story or hold the FBI accountable.

NASA is taking the Navajo language to Mars, with the help...